The third Tramping Monday had similar attendance to the first one – only 1 person. Jacqui and I drove to Windy Point which is not too far from Engineers Camp. We crossed Boyle River on a nice shiny swing bridge and climbed up to the Te Araroa Trail crossroad and turned west, following the Hope Kiwi Track.

What looked like a grassy slope on the map turned out to be a pretty overgrown slope which would be too hard to bash through so we chose to bush bash through mature beech forest instead. The route was OK apart from some really dense patches of native bush. The trees were very wet and we soon got soaked. As we were climbing up, the temperature dropped and we both got pretty cold. We both had spare clothes but we were waiting to get above the bushline to put them on.

Somewhere around the 1200m contour, we met a marked route that seemed like it went somewhere down towards Hope River. It was in fairly good shape (much better than our bushbashing route) so next time I’ll definitely go from the other side so I can explore where the route actually starts. It might go somewhere towards pt657 and even though I’d have to follow Hope Kiwi Track for longer, it’d be a quicker option. The track is accessible via a clearing at pt1239 and it’s vaguely marked with pink plastic stripes. EDIT 2022: see this post.

It took us over 3 hours to get above the bush, mostly because of the difficult terrain. We quickly changed our clothes and started walking again to get warm. We continued along pt1452, pt1514, pt1536 and pt1676 to the top of Mt Garfield where there was a fair bit of snow that slowed us down. We finally reached the top 5 hours after we left the carpark.

The tops were beautiful with great views across the snowy tops of Poplars Range and other surrounding ranges. We followed the ridges towards pt1451 and started our descent across pt1243. This is possibly the closest ridge to Boyle River that you can take. Going across pt1232 would just be a mess with a lot of rocky sections, bluffs and dense young vegetation. Going down the creek along pt1243 is reasonably OK but clear patches were mixed with some dense bush. Perhaps TR of that small creek would be better for next time.

When we rejoined the TA, I felt like I could fly. The trail looked pretty straightforward on NZ topo map. However, there are some ups and downs and we had to go around a new fenced area which added another couple of hours to our trip. I’m quite interested in what the ridge across pt1025 would be like so if you happen to give it a go, let me know!

The whole trip took us around 9 hours. Jacqui said it was one of the best day trips she’s done which I agreed with, even though it was quite challenging, there was plenty of variety of terrain and complete silence on the tops which was really rewarding. 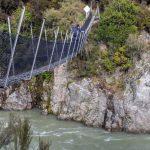 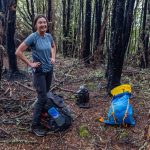 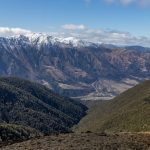 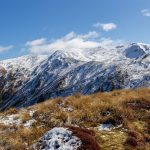 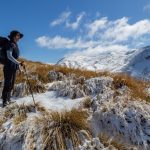 Be the first to comment on "Mt Garfield in Doubtful Range"