Brass Monkey Bivouac is a highly elevated bivvy precisely settled on the tops of the Lewis Pass ranges. There is no direct route to it. There is an article in Wilderness Magazine “5 ways to Brass Monkey Bivouac” that briefly describes 5 ways to get up there. As this was only my second trip as a leader of the Christchurch Tramping Club trip, I opted for a relatively easy route up via Lucretia Stream. For the way down I chose the route via Duchess Stream which was a bit more… ehm – let’s stick with the word “adventurous”. 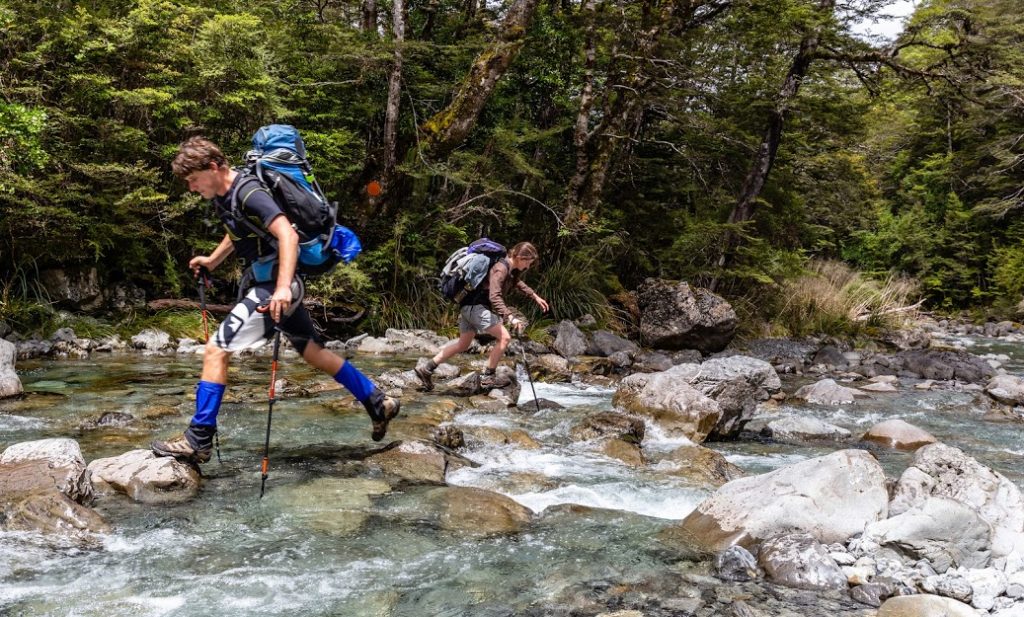 We started off by crossing the bridge near the NZDA lodge north of Boyle Village. We followed Nina Valley Track which was in great condition and easy to travel on. After passing the bridge across Nina River, we stayed on the TL of the river and continued west. David was, as usual, flying over the trail like there was no tomorrow, followed by Jacqui and Colin. Me, Kupkin and Anna decided on a more easy-going pace. We all met by Lucretia Hut where we had lunch. From Lucretia Hut, there is no official trail up the stream. However, CTC member James Broadbent cut and permolated the trail a few years back and it’s still in a reasonably good condition. There were a few places where we had to split and look for markers as we were unsure where to go but we soon found where the trail was going. The main issue was at the bottom of the spur. There were fallen trees over the track and we weren’t sure where to go. It seems like we should have stayed on the top of the spur. Though, after some bush-bashing, we found the trail again and soon we managed to get above the bushline. The views around were breathtaking. Above the bushline – finally!

After a break, we started to head further up to the saddle between pt1605 and pt1602. With good visibility around, I realized this was probably the only way out of Lucretia Valley. All the other spurs around looked close to impassable. The travel up the saddle in open tussocks was quite easy and fast. At the saddle, David turned back as he was about to travel to the UK and the rest of us continued towards pt1602. Break up at the saddle

This part was also relatively easy without any bluffs apart from those on the northern sides over pt1602 which is better to avoid. 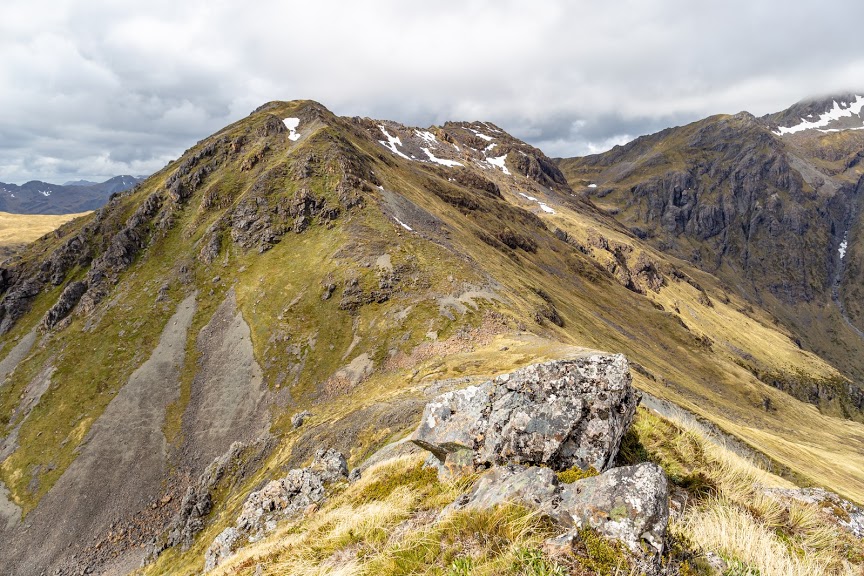 From the top of pt1602, we continued in a similar direction further down, from where we soon could see Brass Monkey Biv.

Even though it was officially summer, the temperatures were less than 10 degrees with a strong wind chill. We had heaps of tea and some food. Jacqui and Colin took the biv for the night and the rest of us pitched our tents not far from the biv. Very picturesque place to put a tent or two

The night was windy and chilly but nothing that a morning cuppa wouldn’t fix. The following morning I was happy with the visibility so I decided to follow the plan and go down Duchess Stream. 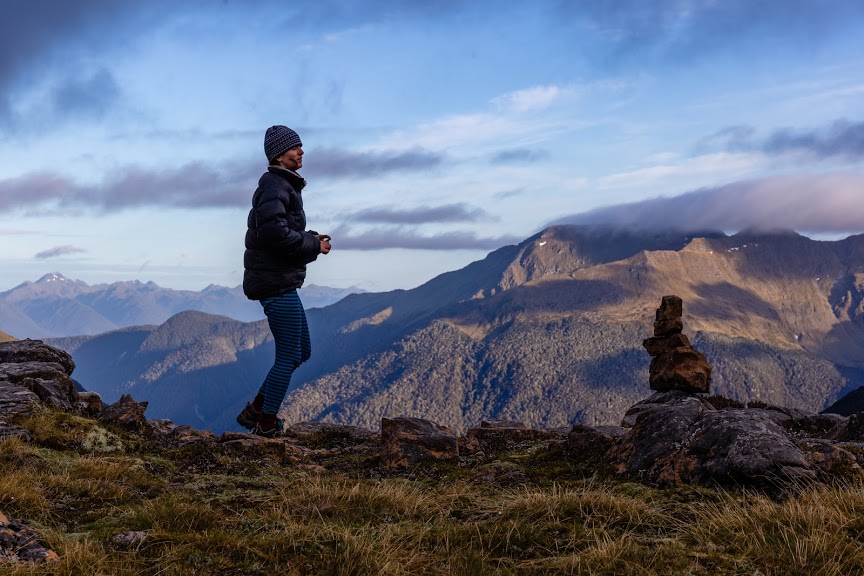 The way down from Brass Monkey to Duchess Stream is really steep so it’s better to traverse west along the ridge to avoid the main bluff, and then descend to the valley bottom. Somewhere there, I lost my phone. I was sure that it slid down the valley. 3 days later, Anna found it at the bottom of the bathtub when she was soaking my backpack to give it a proper clean. I had no idea how I managed to not find it in my backpack after having searched through like 5 times. This phone story is pretty embarrassing so let’s move on. 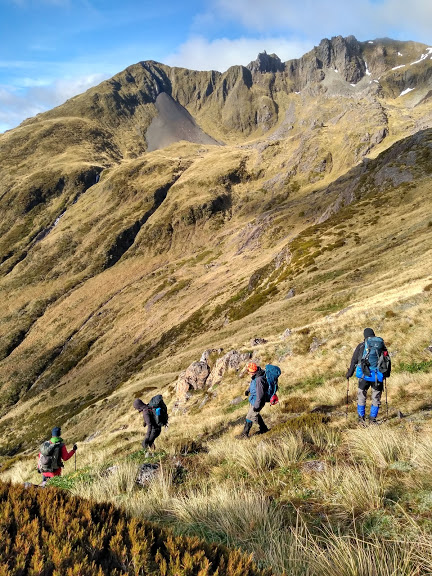 Traveling via Duchess Stream was tedious and slow. Each deer trail soon or later ended. I knew we should have stayed on the TR of the stream but we had to cross the stream many times as the right part was impassable in parts. When we came down the stream where the bluffs are, we wanted to avoid them by climbing over the tops. We stayed on the TL side of the stream which I knew wasn’t ideal but the TR looked even worse at this point. 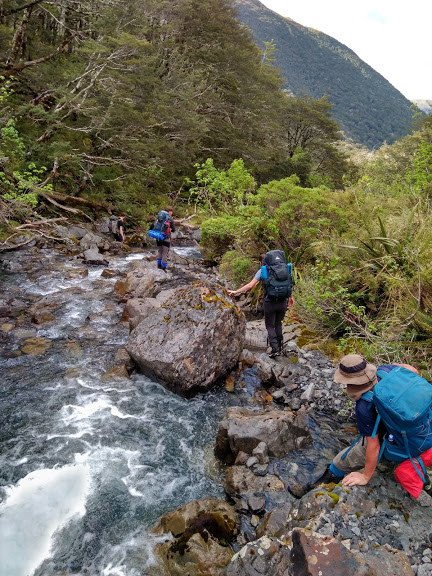 We passed a massive landslip (actually the biggest I’ve seen) that forced us to climb higher still until we reached bluffs ahead of us and we were forced to descend back to Duchess Strem. I was hoping that at this point we’d passed all the bluffs but once we got down the valley on a super steep slope, I realized that we were not over the bluffs yet. We managed to get over the main impassable crux but there were more boulders, waterfalls and deep water down the river that we had to overcome. At one point Kupkin and I went ahead without our backpacks to scope it out further down just in case there was another impassable section. Long story short, it took us about an hour to overcome about 500m. At the end, we were cold, wet and hungry so we took a decent break at Nina Hut where we shared our recent experience with a hunter that didn’t seem to care too much but we didn’t give him a choice and talked it out anyway. Back at Nina Hut. Uffff

The last bit from Nina Hut to NZDA was just sunshine and roses – a nicely maintained trail that was easy to travel on. On the way back, we stopped in Culverden for a mountain of ice cream that we believed that we all deserved.

Thanks to all the participants for coming. I’m going to come back and try to find the route over the bluffs! I’m sure that it is somewhere there.

Kirwans Hut on the West Coast