Kirwans Hut is probably one of the fanciest huts on the West Coast. It’s located in an area that has been extensively mined. Even the track to the hut was originally built for mining purposes! 6 CTC trampers started off with the intention to reach the hut and hope to not get rained on too much. After having some photography fun at Topffer Creek bridge, we followed Topffer Creek on a very obvious and wide track. We soon split into 2 parties – one was fast, the other one was extra fast. The extra fast folks were conscious enough to wait at regular intervals for the rest of us which added a good safety dimension to my always-think-if-the-worst-case-scenario trip leader’s mind.

We reached the hut in less than 5 hours which was pretty fast. The hut was empty which was great, but it also meant that it was very cold. Soon after we arrived it started raining and the hut got even colder. As our bodies were cooling off and the cold was creeping up, we tried to get the coal fire going to warm the hut up, but it ended up taking a good 3 hours. In the meantime, the old newspapers that I’d brought for the fire provided us with endless entertainment in the form of quizzes and crosswords. I didn’t expect such success with some old papers so I’ll make sure that next time I bring more. Once the coal finally got going, it got so hot that I started to regret taking a top bunk instead of a bottom one.

The following morning I woke up hoping for some good views but instead of them I saw the same as last night: fog, fog and nothing but fog. Hut possum and hut weka turned up to say hi which was only a weak consolation for the lack of views. At 8 AM, we were all packed up in front of the hut, ready to start descending. The track from there onwards was a bit rougher with occasional fallen trees but still pretty good for the West Coast. On the way down to Montgomerie River there were some pretty impressive remnants from times of the West Coast Gold Rush like Mrs Flannigan’s Boarding House or Lord Brassey Stamper Battery. We reached Montgomerie Hut in about 3 hours.

At Montgomerie Hut, I tried to convince someone to go for a wee swim with me but the success rate was very low. Oh well – I jumped into the river by myself. I managed to swim for 15 seconds (perhaps only 10 actually) but the feeling of being refreshed was very satisfactory (and I also couldn’t be blamed for being smelly in the car on the way back).

From Montgomerie Hut the track follows Waitahu River and is mostly a 4WD track but there were still some ups and downs. Jacqui, Jimmy and Geoff went for a couple of bush bashing adventures to spice up their weekend experience (although I’m a bit suspicious that they missed some orange markers). Jimmy also decided to test the stiffness of his ribs and landed on them once or twice which caused some bruising and light breathing issues. Fortunately, young folk heal fast. The last bit from Waitahu River Rd to Capleston car park was mostly across retired mining land which is always quite sad to look at – it consisted of mostly exotic and invasive plant species, water was scarce and if present, it was full of algae.

On the way back we stopped in Reefton for some good old fries and burgers. We were back in Christchurch at 10 PM. Oh, and if you want to have plenty of entertainment while driving, ask Jimmy to come in your car and tell you about his work experience since he’s been a teenager until now. 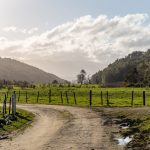 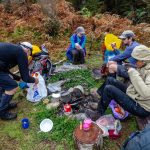 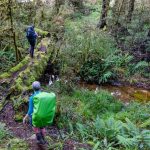 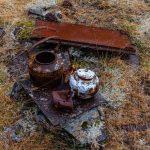 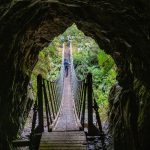