Osprey backpacks have been out there for a while. The company was established in California in the ’70s by Mike Pfotenhauer. What started as a fun project, ended up being one of the biggest and most known backpack companies in the world.

I bought my Osprey pack back in 2013 when I was getting ready for the Camino Francés, a 900 km pilgrimage across Spain. The model I went for was Osprey Kestrel 68L, size L. The reason I went for this backpack was quite simple: I went to an outdoor shop, tried on about 5 packs and when I finally put the Osprey Kestrel on, I immediately knew that we were gonna be good mates. 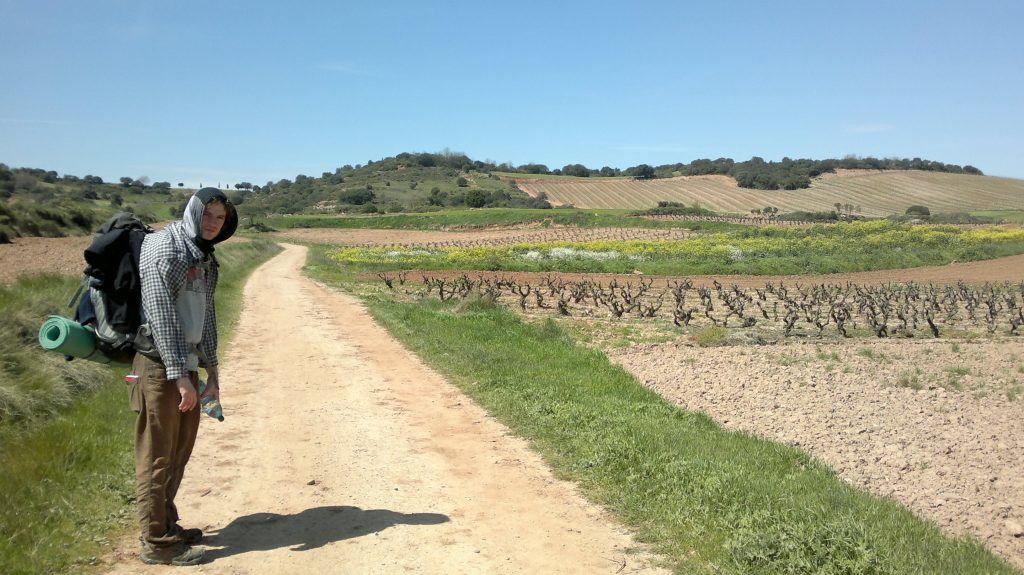 The backpack has been with me since my first long-distance adventure – 2013, Camino de Santiago

Now I’m at the stage where I actually want to have a smaller pack so I thought it’d be a good time to share a bit about my 7 year experience with the Osprey Kestrel 68L.

Main features of the Osprey Kestrel

The backpack comes in a couple of different sizes – S/M or M/L. I’m 6’2” so M/L was the obvious option. The pack has an adjustable harness that fits pretty much any type of body. The shape of its harnes allows reasonable ventilation so your back doesn’t overheat. I mean, if the summer sun is at its peak and you’re up at the unsheltered tops, you’ll get sweaty like a polar bear in the Sahara regardless. 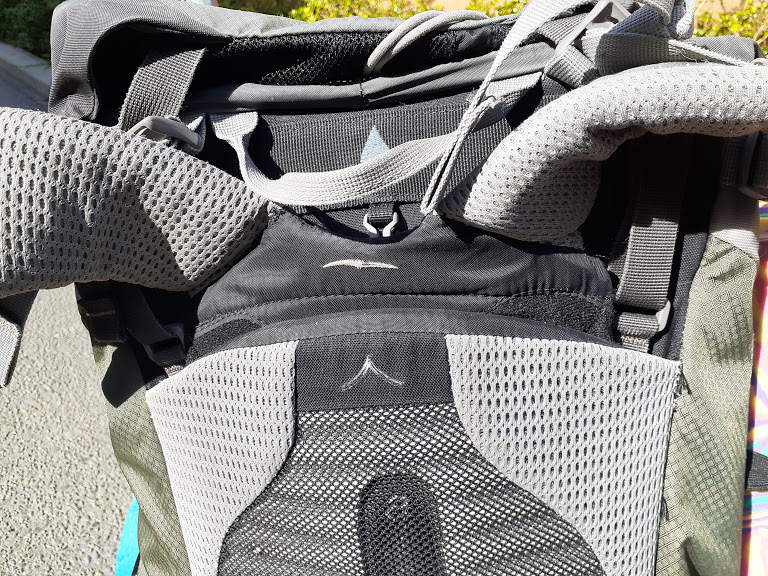 The inside of the backpack is quite simple: one big pocket with space for a camelback and an adjustable compartment for a sleeping bag at the bottom. To be honest, I haven’t used either of those.

The pack has got plenty of pockets: on both sides of the hip belt, length-wise zip pockets on each side of the pack, and three zip pockets on the top closing lid. The pockets in the top lid are quite big so I tend to overload them with stuff. That’s not very clever as you don’t want to have too much weight in the top of your pack. You definitely want to have the heavy stuff at the bottom of the pack for better balance and for saving your shoulders from being pulled back. The pack also has 3 mesh pockets – two on the sides and one on the front. 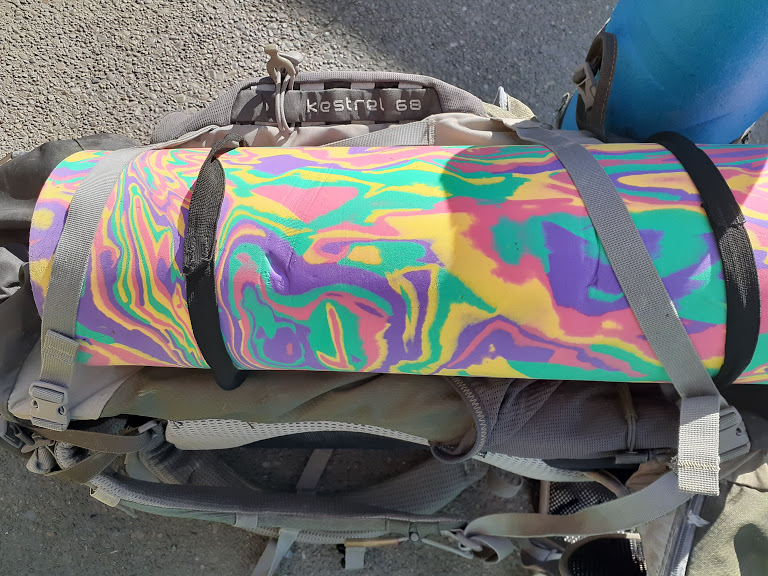 Backpack with my new hippie mat attached from the side

The backpack has a couple of ice axe loops together with hiking pole attachment straps. I’ve never used these but the ice axe loops always come in handy in winter conditions. The pack has also got 6 straps with simple clips (that’s a lot!) that allow you to attach 3 big items on your backpack like a tent, a sleeping mat, and a footprint. 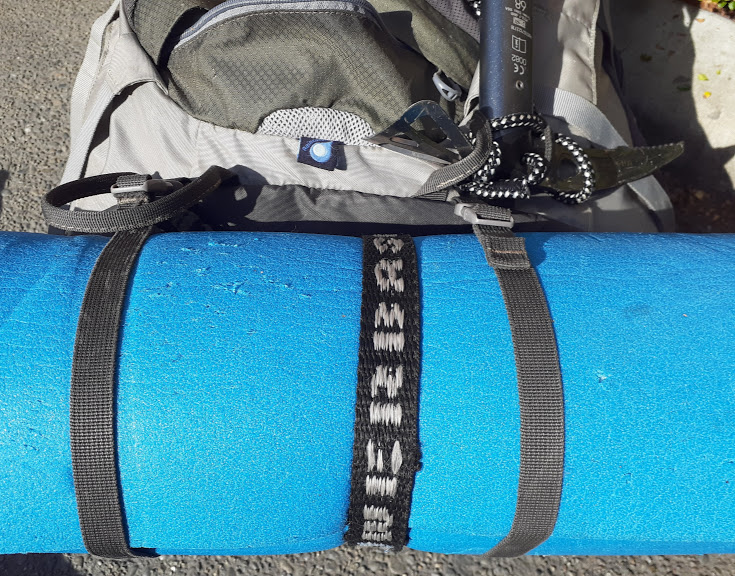 I think it looks reasonably good: 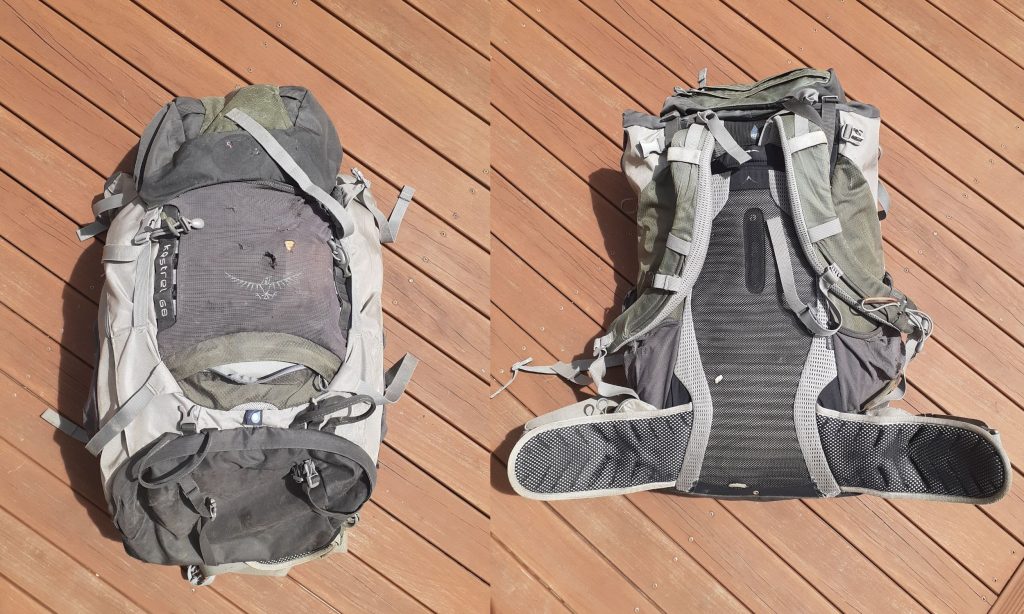 I have to say: I didn’t expect it to last this long at all. I’ve been taking the pack through various airports where luggage – let’s face it – isn’t treated very well. I’ve literally dragged it across rocky ridges on three continents and I even used it as a pannier on my bicycle journey through Eastern Europe. Apart from the mesh pockets spawning some holes, nothing has actually broken which is quite admirable these days when things are made to last a season or two. There are some places that have obvious wear marks, but the overall shape of the pack is still great. Sturdiness. What I love about the packack is how sturdy it is. I’ve used it over many many hikes and in everyday life, too. The zips and buckles are still going strong. Winter use? No problem (I’m the second from the left)

Versatility. Because I’ve been on the move for a long time, I simply couldn’t afford to have two packs. Therefore, I was using the pack as a day pack, too. I know it’s quite silly to use such a beast for a spare jacket, lunchbox and a water bottle during short day trips, but I kind of got addicted to having the extra space on hand. Many times that extra space came in handy – for example when I decided to do grocery shopping on the way home or when I needed to lighten the load of a tired fellow hiker. The backpack in 2 extreme examples: as a day pack with a couple of things in it (left) and ridiculously overloaded with a 10 kg bag of coal (right)

It really seems like the canvas of the backpack is so sturdy that the backpack has the potential to last a lifetime if you don’t drag it across rocks.

What Could Be Better:

Weight. 2.5 kg of weight just for a backpack seems to be excessive these days. Even though I can easily carry over 20 kg and it still fits perfectly on my back, there actually haven’t been many occasions where I’ve needed to load that much. Maybe only during our 4 week trip to Iceland in 2017 when I was carrying a lot of food. Otherwise, I appreciated the possibility of carrying such heavy loads only when I was moving from one place to another, not so much during actual hiking. Yes, there are small holes at the places that are used the most, but the holes don’t spread and they don’t affect any functionalities

Water Resistance. The pack has its own rain cover that copes with rain well unless it’s one of these days when the rain is horizontal and the water is coming from every possible direction. It happened to me a few times that the water would get between the pack and my back or the water would find its way in from the pack sides.

I understand that having a dry bag would sort it out but that seemed like too much to carry: rain cover, heavy pack, and a dry bag. The good thing about the rain cover though is that it’s big enough that I can get it over a sleeping mat attached to the pack.

Mesh Pockets. It’s not a surprise that the mesh pockets are close to being useless after 7 years. They were made out of a less sturdy material than the rest of the backpack and the way I’ve been using them has been pretty harsh. I tried to sew the pockets up but it didn’t last very long. I’m going to replace them soon. 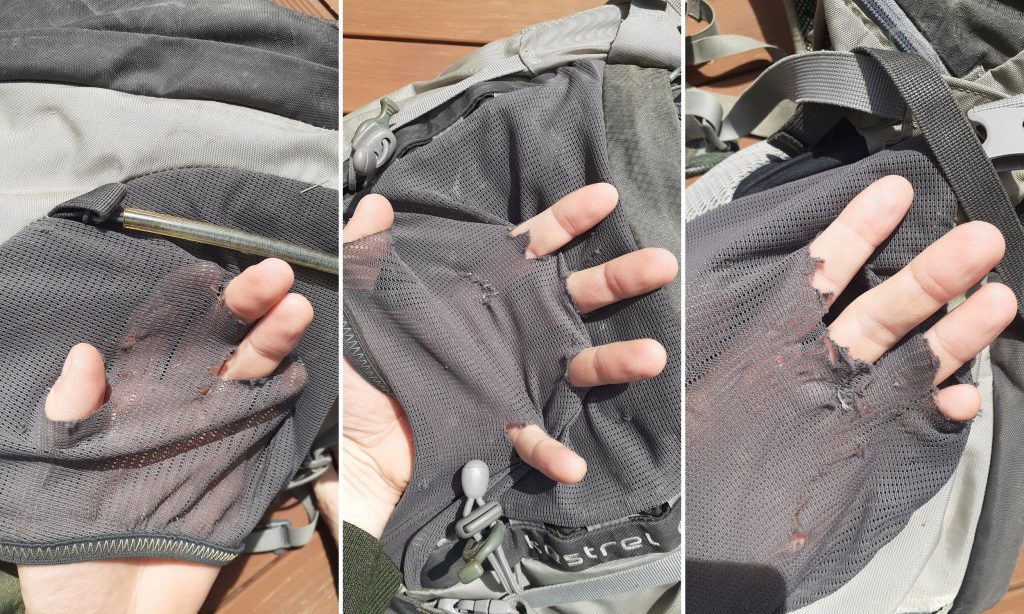 Hip Belt Pockets. They’re very small and it was nearly impossible to actually use them with the original rain / protective straps hanging over the zip (not pictured) so I chopped them off. They still a bit tricky to use, perhaps looser canvas would make them more usable. Hipbelt pocket after chopping the top part off

Perfect Backpack if it was Lighter

During the years of using the backpack, I’ve become a big promoter of Osprey backpacks. Just because my experience with this one has been so good. However, as I’ve switched into lighter gear, the Osprey Kestrel just doesn’t suit my needs anymore. Don’t get me wrong – it’s a perfect backpack for those looking for a sturdy, extra comfortable, versatile backpack. But the main issue is clear – the weight. 2.5 kg is just a killer if you want to travel light, which I, considering my aging skeleton, want more and more.

Considering the price, I think it’s reasonable. If it seems too expensive to you, think about it as a long term investment. As I like to say: I’m not rich enough to buy cheap things.

Be the first to comment on "Gear Review: Osprey Kestrel Backpack After 7 Years of Travelling and 5000+ km on Trails"