Mt Somers Track is one of the most popular overnight hikes for Christchurchians. Fair enough, it’s close to Christchurch and it’s pretty nice there. As the track doesn’t go too high up, I made up my own variation of the track with ascending Mt Somers and Mt Winterslow which are the highest mountains in the area. Alright, I didn’t actually stand on the top of them but I was just an easy stroll away. 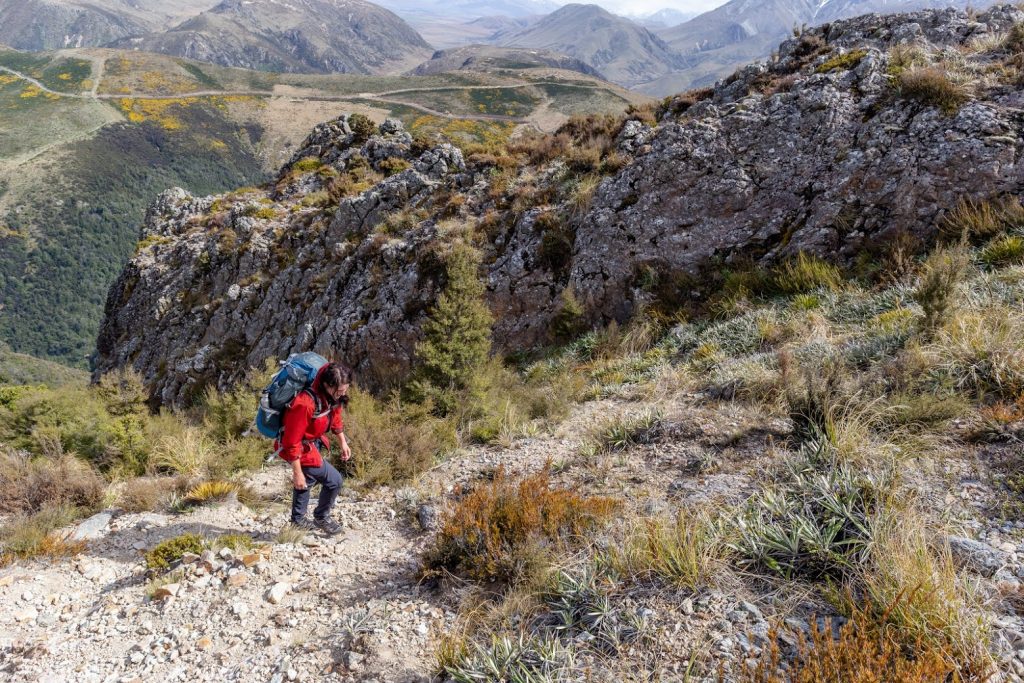 Kate, Kupkin and I started at the car park by the end of Jig Road. It was a sunny day and all was looking great. I was reasonably sure that we can take Kate in her 6th week of pregnancy up on the ridge. Not that she’d have much of a choice anyway. We crossed the bridge over Woolshed Creek and started to hike up Rhyolite Track. It’s a pretty steep but well maintained track. After the steep part there is a lovely flat part where we found out that it was a bit on windy side. We kept following the track until we reached a well known bus stop. No there aren’t any real buses stopping by, it’s just a sign bolted into the rock. 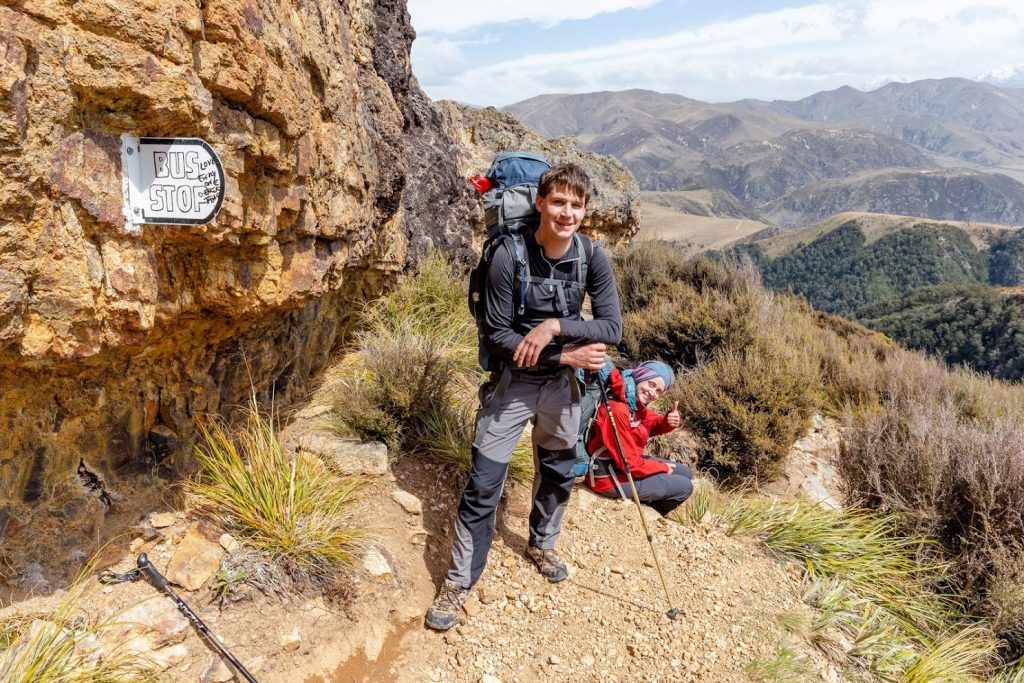 From the bust stop, we took the right side of the rocky ridge and started to make our off trail path on the western slopes of Mt Somers. It was quite easy to navigate and not really steep as we smashed most of the elevation gain at the start of our tramp. There are some parts where you can get stuck, but obviously you won’t go directly to the vertical rocky walls. Up there I discovered two things. First, the western side of Mt Somers is incredibly wet. There are bogs everywhere. I felt like in Scotland. Second, the wind was getting stronger and stronger which started to worried me a bit. When we reached 1550m altitude, Kate and I sent Kupkin to the summit and me and Kate went off to look for a place to descent. I’ve been there before so I knew where to go but in a low visibility it could be tricky to hit the right place for descent on rocky slopes. The rock cairns keep going along the ridge and I wonder where they actually go (Wollshed Creek Hut perhaps?). The descent to the saddle between Pinnacles Hut and Woolshed Creek Hut took us about 2 hours, about 1.5 hours longer than I expected. It turned out that Kate is not very confident walker in gale strong wind – I don’t blame her though, I got nailed to the ground by the wind at least twice. 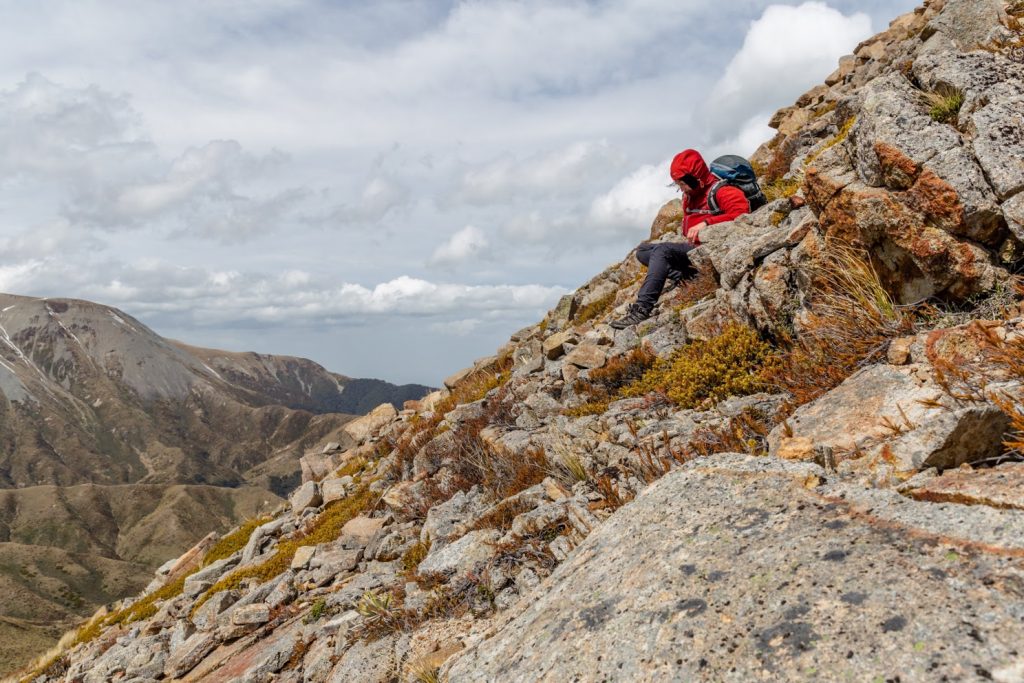 Reaching Mt Somers Track felt like a victory. It lasted less than 10 seconds though. As soon as we reached the track, it started to rain cats and dogs. It took us another hour to get to Pinnacles Hut. By the time we arrived to the hut, we were soaked wet. The hut was full of kids and smiling trampers. It was actually nice – I guess that just means that I’m getting older if I enjoy presence of kids ay? They’re just so spontaneous and can live in the moment like nobody else (together with dogs). We took a bunk and for the rest of the day we just hanged out which I can do extremely well. 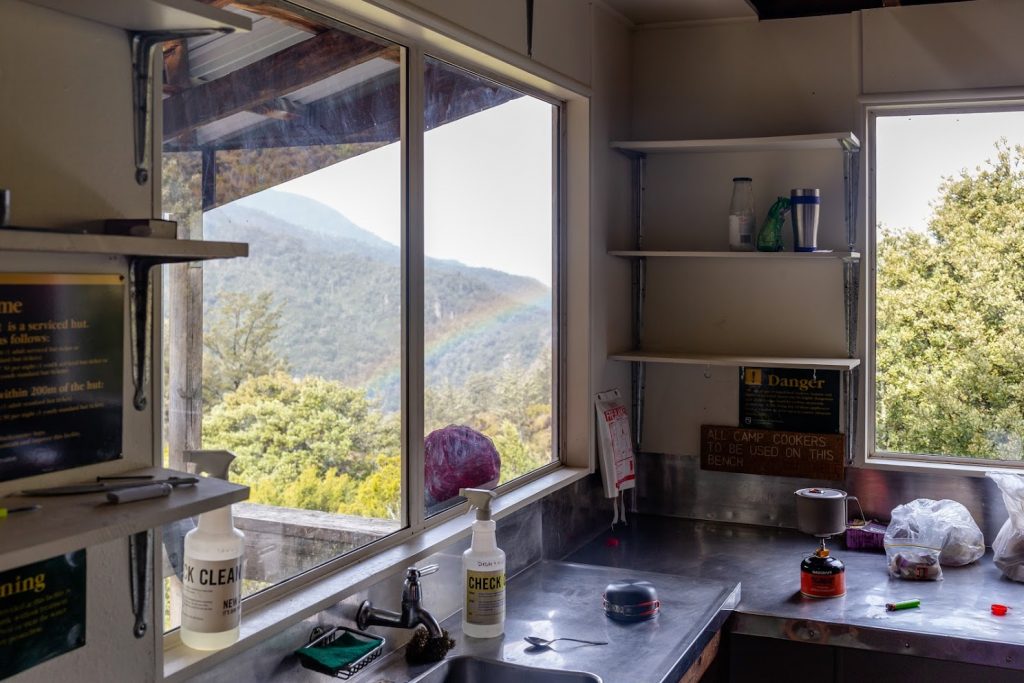 The day after, the deal was clear: Kate will make her way to Woolshed Creek Hut along Mt Somers Track and Kupkin and I will ascent Mt Winterslow and follow the ridge-lines all the way to Woolshed Creek Hut. We started hiking and as soon as we got above the bushline, we turned right, following a small stream. What looked like a sensible option to start with, turned to be a freaking 2 hours bush bashing during which we managed to overcome not more than 1 km. If you want to spare your skin from an excessive amount of matagouri thorns and spikes of speargrass, or if you just don’t feel like scrambling on six meters tall vertical waterfalls, you should find another way to hit the ridge that goes to Mt Winterslow. 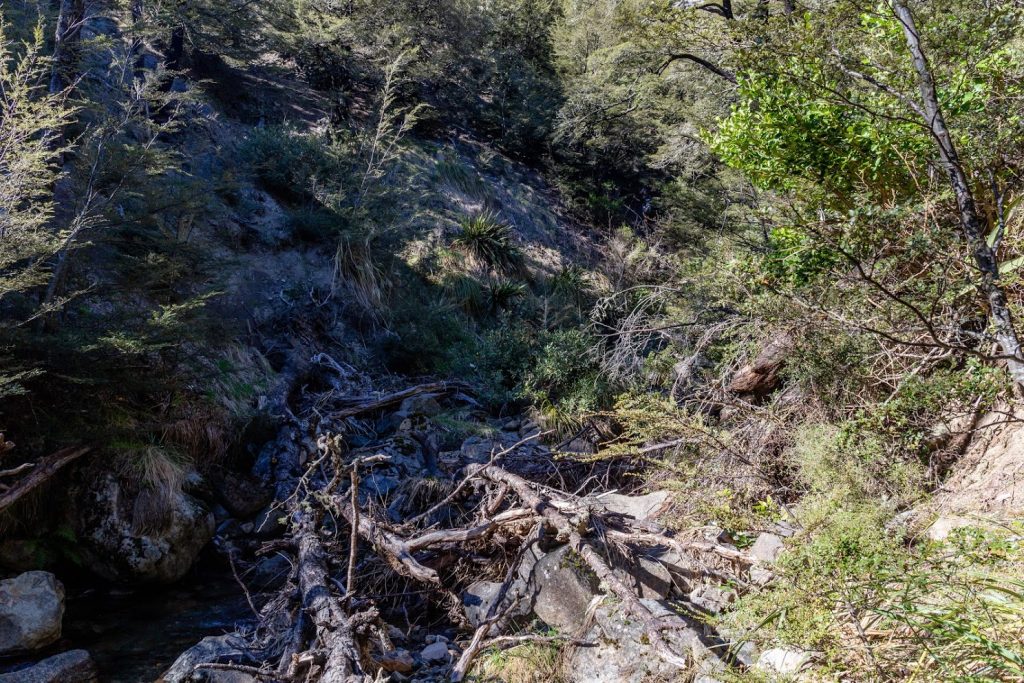 Not the best way to climb up Mt Winterslow

And that way is very easy: just stay on Mt Somers Track for 5-10 minutes longer, cross the first creek and then turn right. Or go and start from the saddle. You could also, of course, go towards Sharplin Falls car park and then get to Mt Winterslow via Pony Knob. But that’s just boring and bloodless.

Anyway, when we finally found our way from Bowyers Stream, we hit the ridge going to Pt 1625. That was quite pleasant to follow. When we stood on top of Pt 1625, we simply decided not to go to Mt Winterslow as we were nearly standing on it anyway and off we went towards Peach Saddle. If you ever get up there and it’ll be cloudy, there is an old fence on the ridge line which if you follow, it takes you to Peach Saddle. We turned south from the main ridge just before Peach Saddle. Later on, we met a local tramper and he said that we did well since if we took the ridge that goes directly from Peach Saddle down, it would cause us a lot of pain. Once we hit the ridge, it was all roses

The ridge that we took, from the last knob east from Peach Saddle, was easy to follow but still there was quite a few ups and downs. We reached Woolshed Creek Hut about 7 hours after we set off from Pinnacles Hut. If we didn’t get stuck in that bloody (literally) creek that joins with Bowyers Stream, it could have taken us an hour and half less. Wen found some interesting stones along the ridge

Woolshed Creek Hut was empty when we arrived but a few people came later on, including the owner of the e-shop Further and Faster. She was really nice so go and buy something from them 🙂 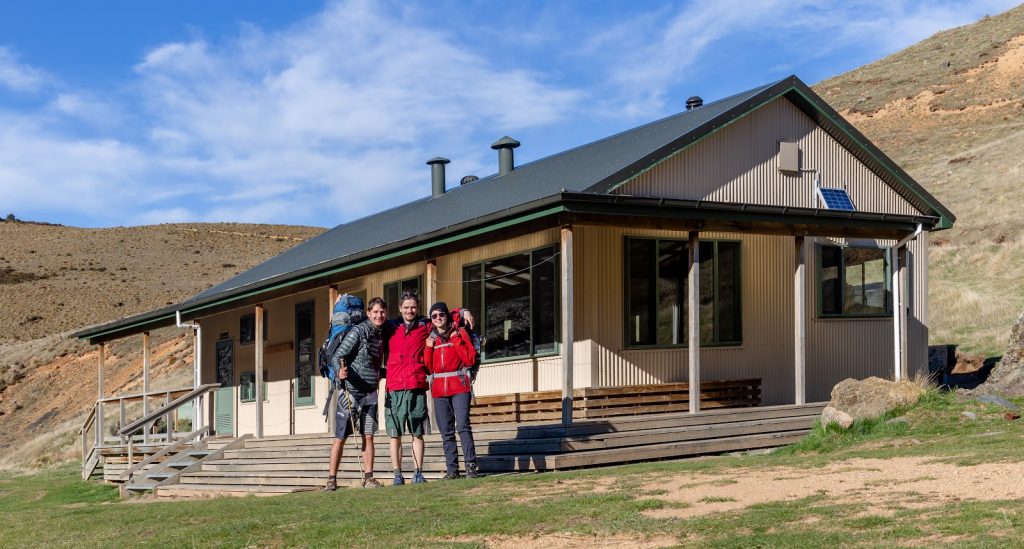 Memorable moment of 3 of us tramping. Considering our locations and fate, a lot of water will have to flow through Waimakariri River until we go tramping together again

The day after we just got a breakfast and hiked out the shortest way to the car park via coal mines. It was pretty full on trip and I can’t wait to come back to try some other variations of it. I keep thinking about ascending Mt Taylor and descent to Double Hut which would be endlessly epic but fairly loooong adventure.

But let’s wait for the snow to disappear. A few tips for hiking the Laugavegur Trail

Tramping around the Black Range: from Comyns Hut to Cookies hut via North Branch Ashburton River

Be the first to comment on "Tramping around Mt Somers and Mt Winterslow: high alternative to Mt Somers loop track"