It’s becoming a tradition this summer that when we want to go tramping on the West Coast, it’s raining cats and dogs (see eg. our Black Range adventure just a few weeks before). With everywhere else under the covery of rain clouds, we were looking to do something different on the Canterbury Plains where the forecast was clear. Mt Taylor (2333m) in Mt Somers Range got our attention as a special enough trip for our weekend. 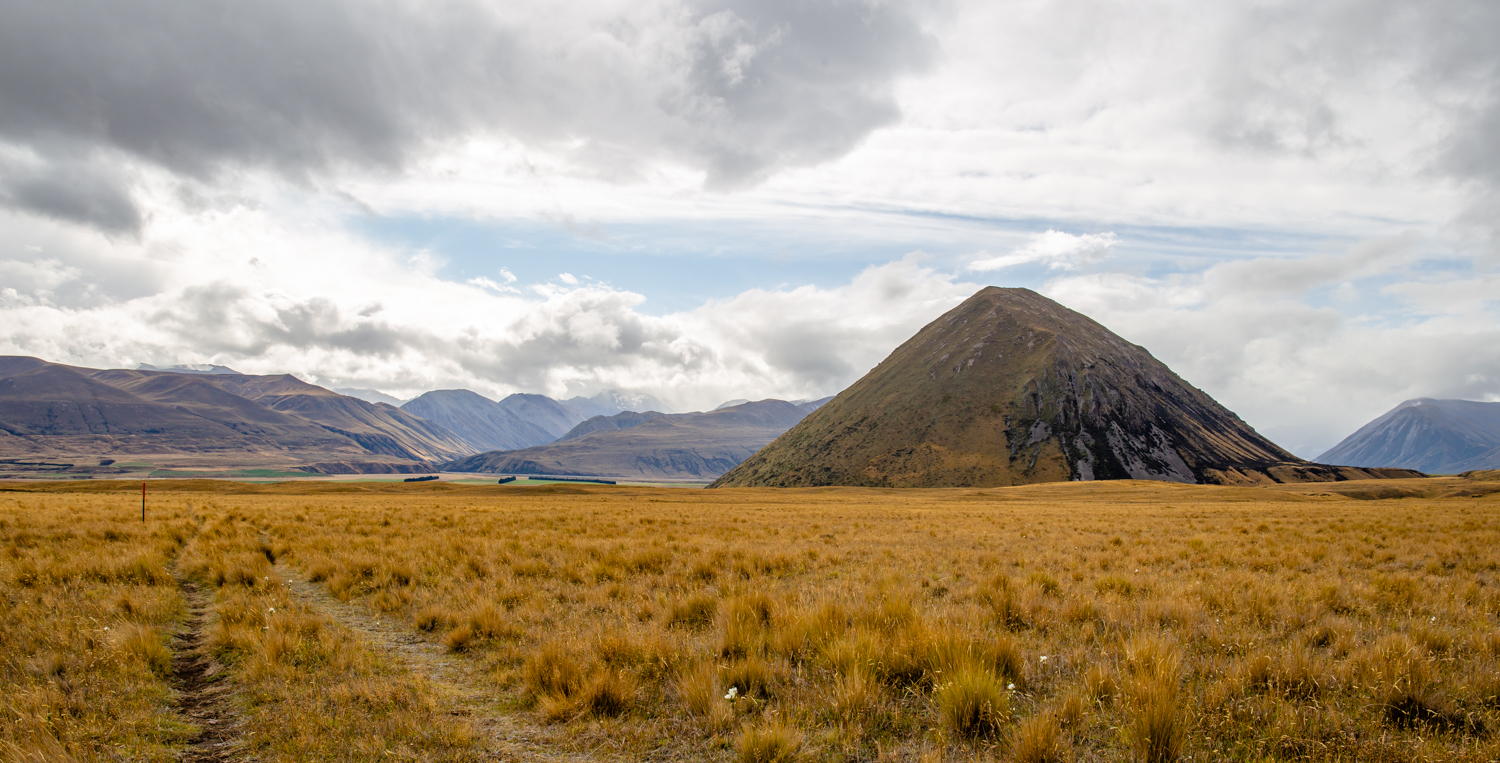 We started our hike on Sunday afternoon. We left our car at Lake Heron carpark, not far from Lake Hill (762m). We followed Swin River Track to Double Hut which is an easy, undulating couple of hours, where we had a wee chat some with Te Araroa hikers then set up a camp and had an early night. Nothing prepares you for a big hike better than a good sleep! 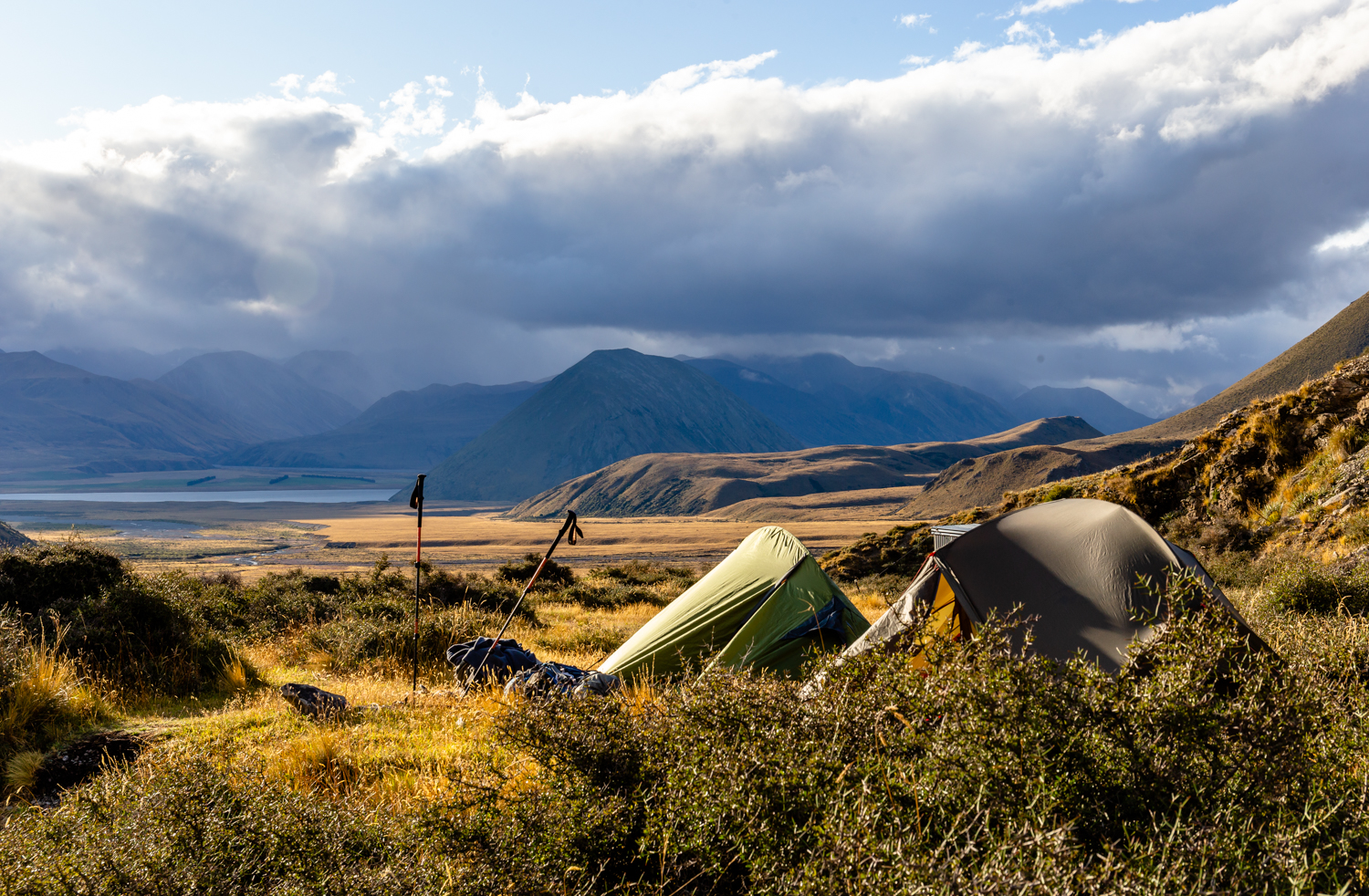 Camping is good for you

The following morning, we packed up and followed Swin River South Branch for about an hour. We were aiming for the ridge coming down from pt1766. At the point where the river divides into two, we turned right and after about 50 meters we saw a grassy slope on the TR of the river. It has quite a lot of speargrass but apart from that, it was quite a pleasant climb to the top of the ridge. The way up to pt1766 was quite straightforward with enjoyable views across plains around Lake Heron. 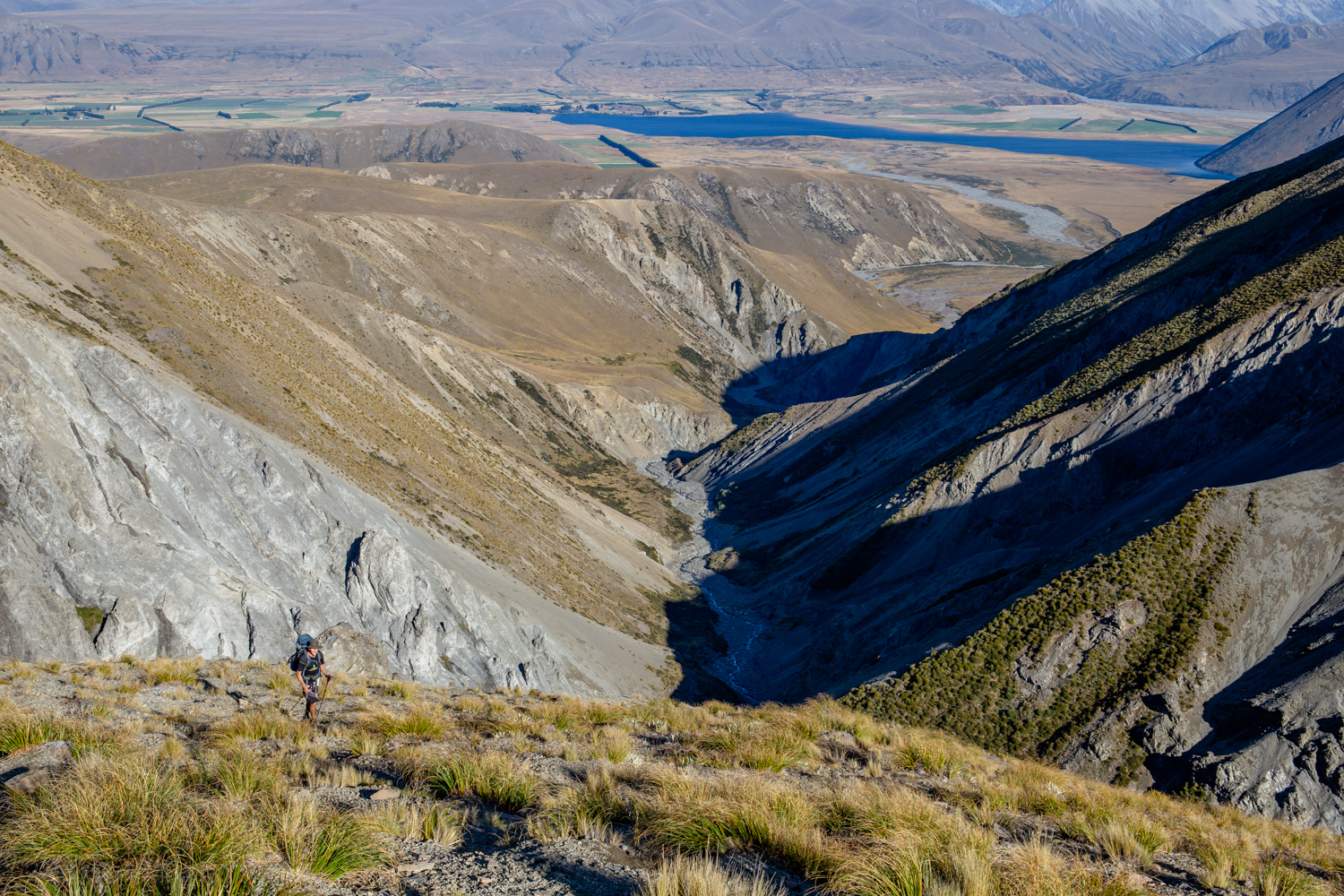 Between pt1766 and pt2062, there is a huge rocky section which we avoided by going around to the left side. Occasional steps in the scree proved to be a good reassurance that we’re on the right track. The rest of the journey to Mt Taylor was quite clear and easy and if you go there, just make sure that you stay on the top of the ridge. The left side of the ridge looked nicer than the right side where you definitely don’t want to fall so if unsure, stay on the left. 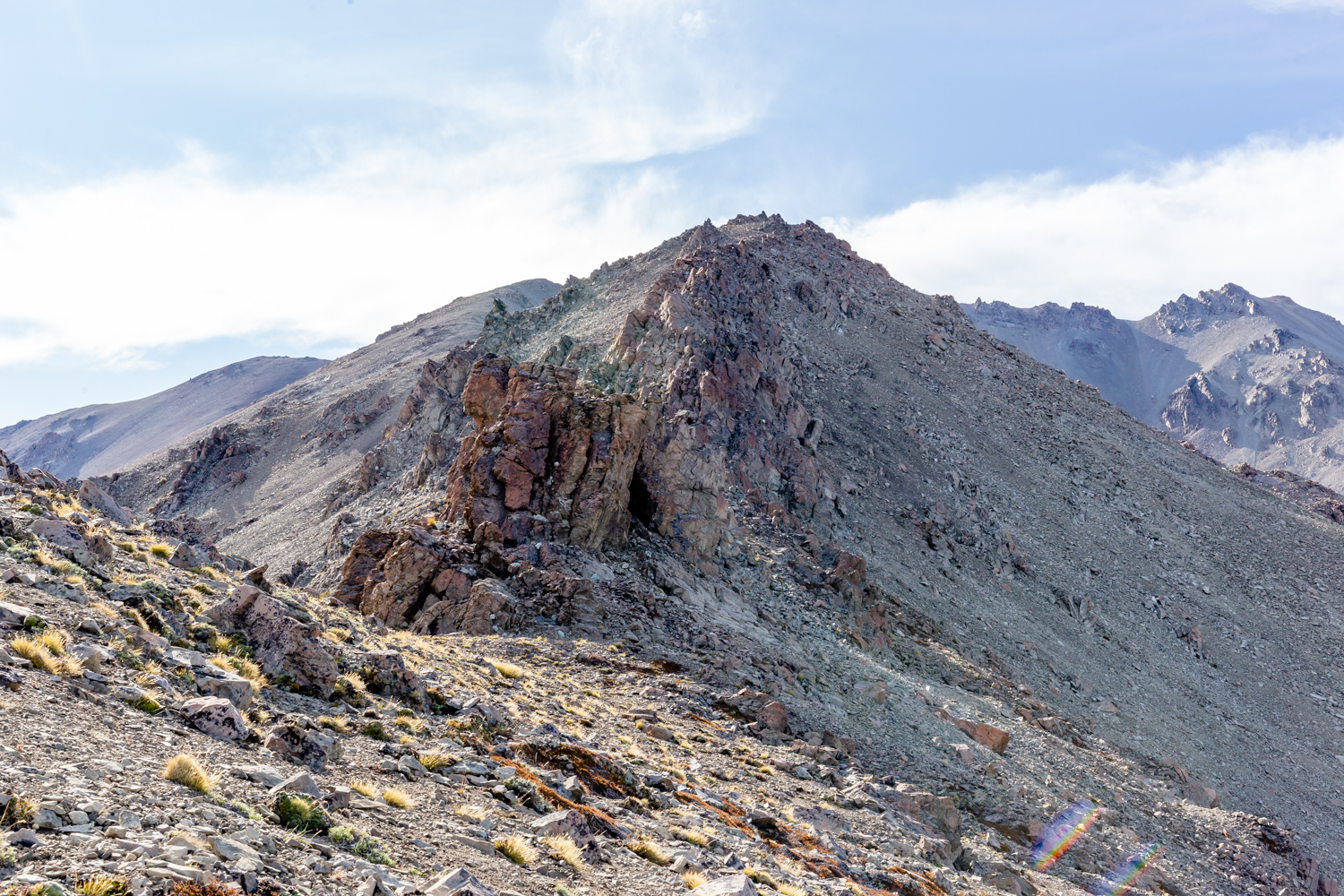 It took us 4.5h to reach Mt Taylor from Double Hut. Note that we had fully loaded packs with tents so if traveling light, it can be done in a shorter time. 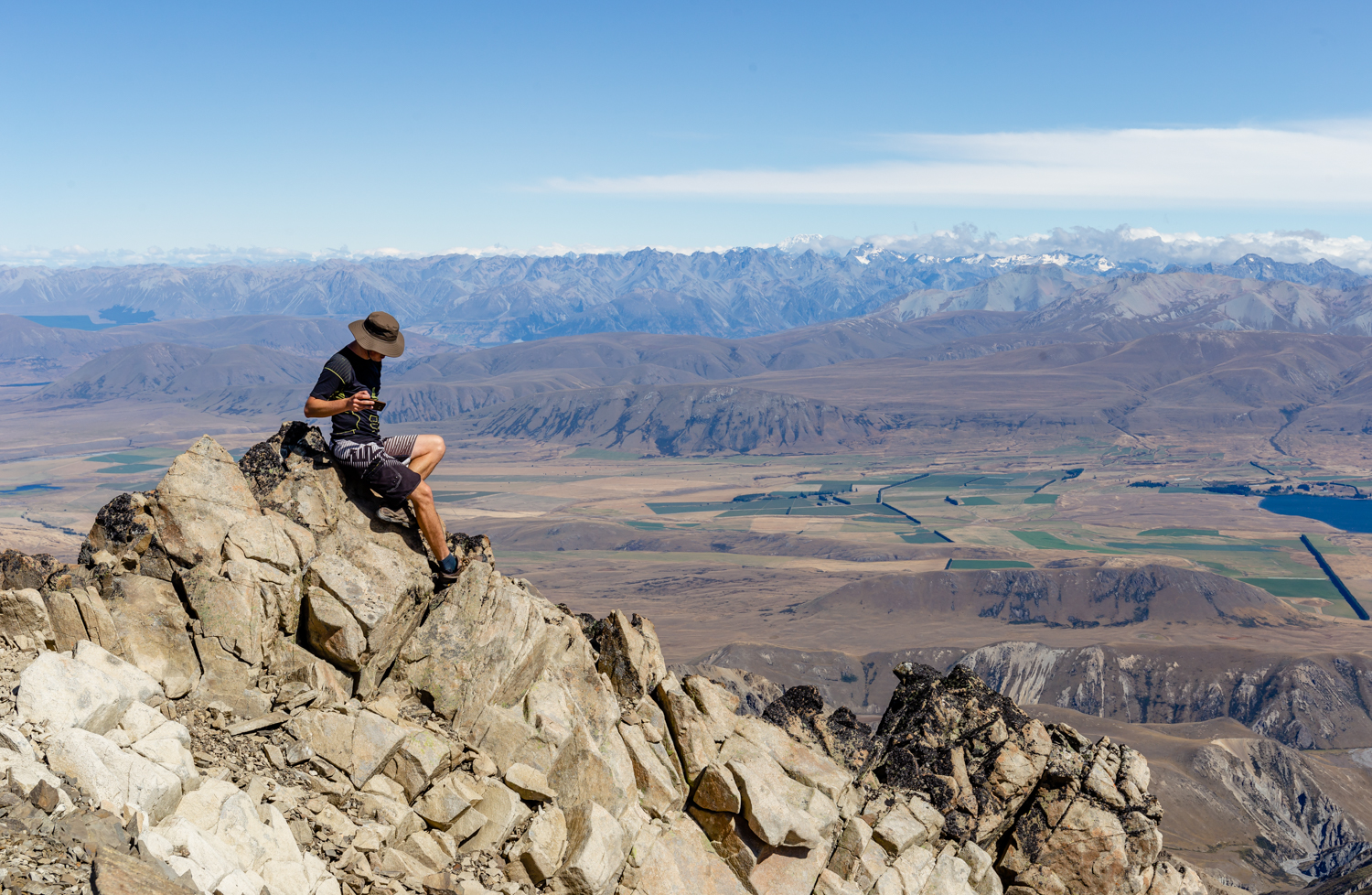 Kupkin on the top of Mt Taylor

From Mt Taylor, we followed the ridge towards Quaker Saddle. This is the route that you can take if traveling from Mt Taylor to Woolshed Creek Hut. We went over pt2290, pt2210 and pt2093 before the final descent to Quaker Saddle. I found this part harder than the route to Mt Taylor from Double Hut. There are quite a few rocky sections that I wasn’t very comfortable with so I decided to traverse around which meant moving on very steep terrain that was exhausting.

Even though the most straightforward way to Manuka Hut would be taking the ridge across pt1294, Kupkin still felt quite adventurous so we dropped down to Quaker Saddle first and then picked up the ridge heading southwest. It was alright apart from the fact that I wasn’t patient enough and dropped down to the matagouri forest where Black Stream meets the 940m contour. Kupkin continued along the ridge to drop down a bit later. Oh well, I’ll know next time that going further is longer but faster and painless. That forest down the river made a few scratches on my pride and legs!

Going to Manuka Hut was very pleasant to start with but the last 1.5km or so was quite nasty. The trail disappeared into the matagouri bushes. I think now that an easier and simpler option would be to climb to the top of Manuka Range and follow the ridge to the hut rather than trying to fight the prickly bushes. Up to Manuka Range, it’d be another 100m up but better than to lose a few kilos of your skin in that prickly hell.

Manuka Hut seemed like a logical spot to finish our tramp for the day but as it was due to rain the day after, we followed Te Araroa for a while and camped by Swin River North Branch. I was quite knackered by the end of the day!

The last day was just a short hike back to our cars. It was quite an epic trip actually but I’m starting to miss the trees. Let’s go somewhere green next time!

Woolshed Creek Hut: Our First Overnight with the Baby

Mt Somers loop in a day? Sure