Going to Black Hill Range wasn’t our first choice for this weekend. We reaaally wanted to go to the West Coast but the weather was so bad that weekend that we couldn’t do anything else but stay on the Canterbury Plains. So, we decided to do the Comnys Hut – Cookies Hut traverse via the North Branch Ashburton River / Hakatere.

We drove to Glenrock Stream car park on Friday afternoon. It was a reasonably nice day – not too hot, not raining but really windy. Oh well, at least I can test out my tarp! We followed the Te Araora Trail to A-Frame hut which was full of TA trampers. They were very nice and immediately offered us a place on the floor which we refused with big smiles and continued to Comnys Hut. When we reached Comnys Hut, there were already about 5 tents outside. We picked a sheltered spot closer to the river, put up our homes for the night and went to sleep. When I said sleep, I meant “sleep” – the night was so windy that I thought my tarp would blow away to the North Island and take me with it. The main trouble for me in high winds is the noise of the flapping tent. Neither me or Kupkin could sleep in such a strong wind so we mostly just took some shut eye. My tarp was doing pretty well in 80 km / h winds

As the strong wind continued in the morning, we knew we wouldn’t be able to tramp across the tops to Cookies Hut. We opted for going into the river bed instead. That turned out to be incredibly fun – knee-deep water and the endless amount of river crossings provided us with enough entertainment for the next few hours. 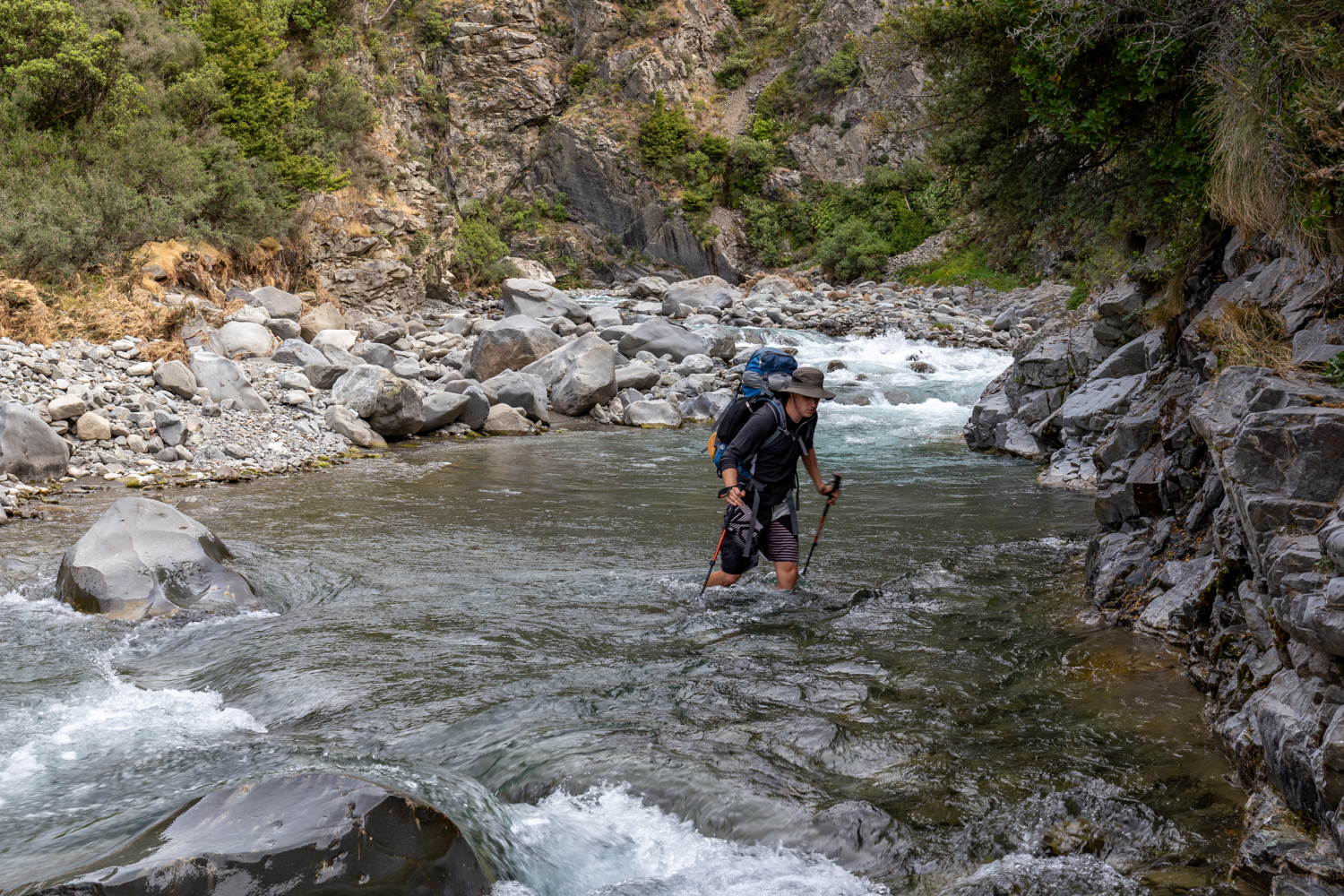 There were no dodgy places and I’d totally recommend this journey for everyone with a playful spirit (providing the water level is low of course). If I should guess the amount of river crossings that we had to perform, I’d go for a number between 80-100. 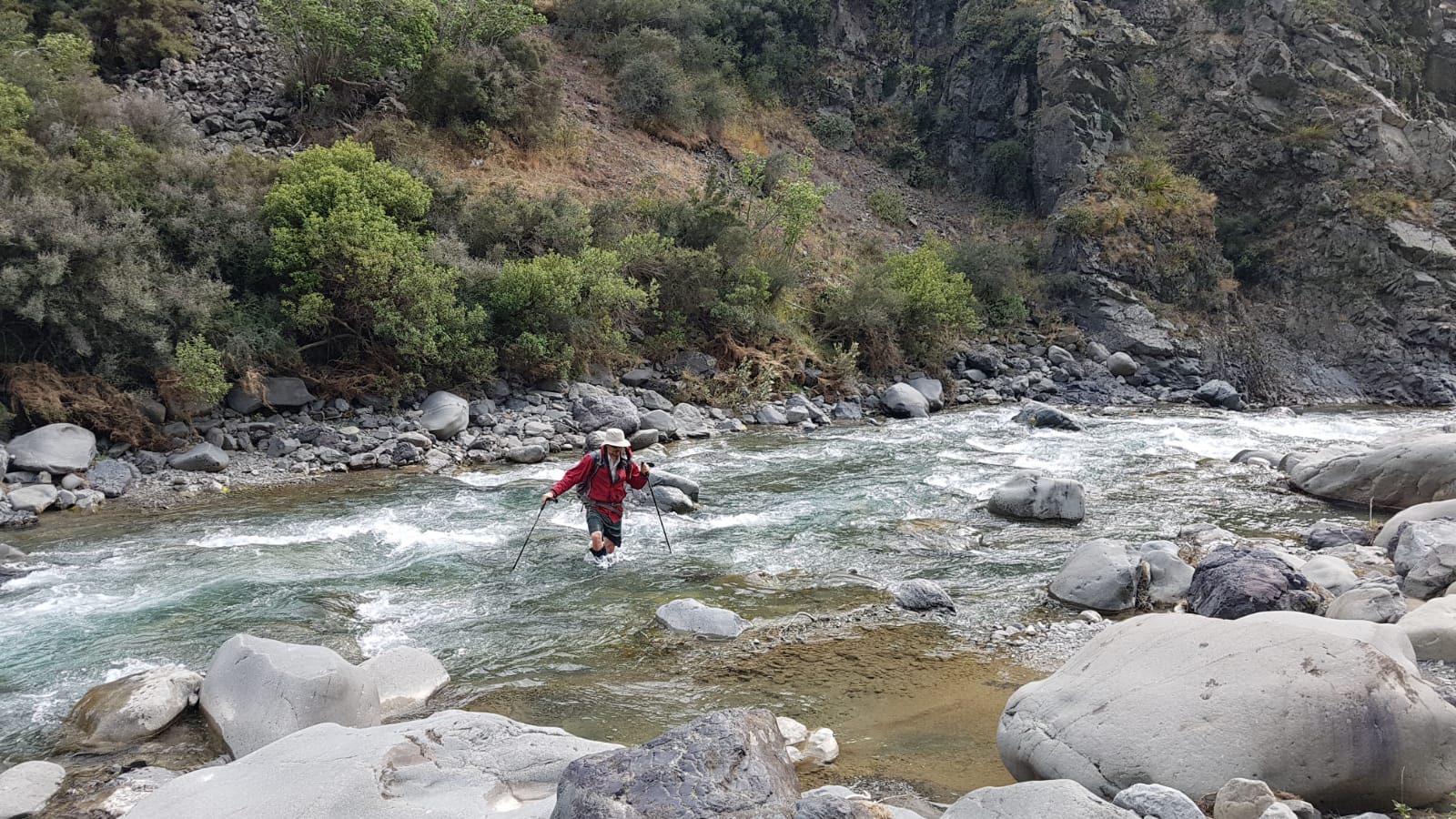 Me crossing (photo by Kupkin)

At Cookies Point, we saw a colony of seaguls. What a beautiful yet unexpected surprise! We turned south and followed Swift River towards Cookies Hut. Along the way, we managed to find a couple of swimming holes that we decided to try out. I just love indulging in the freshwater when the days are hot! 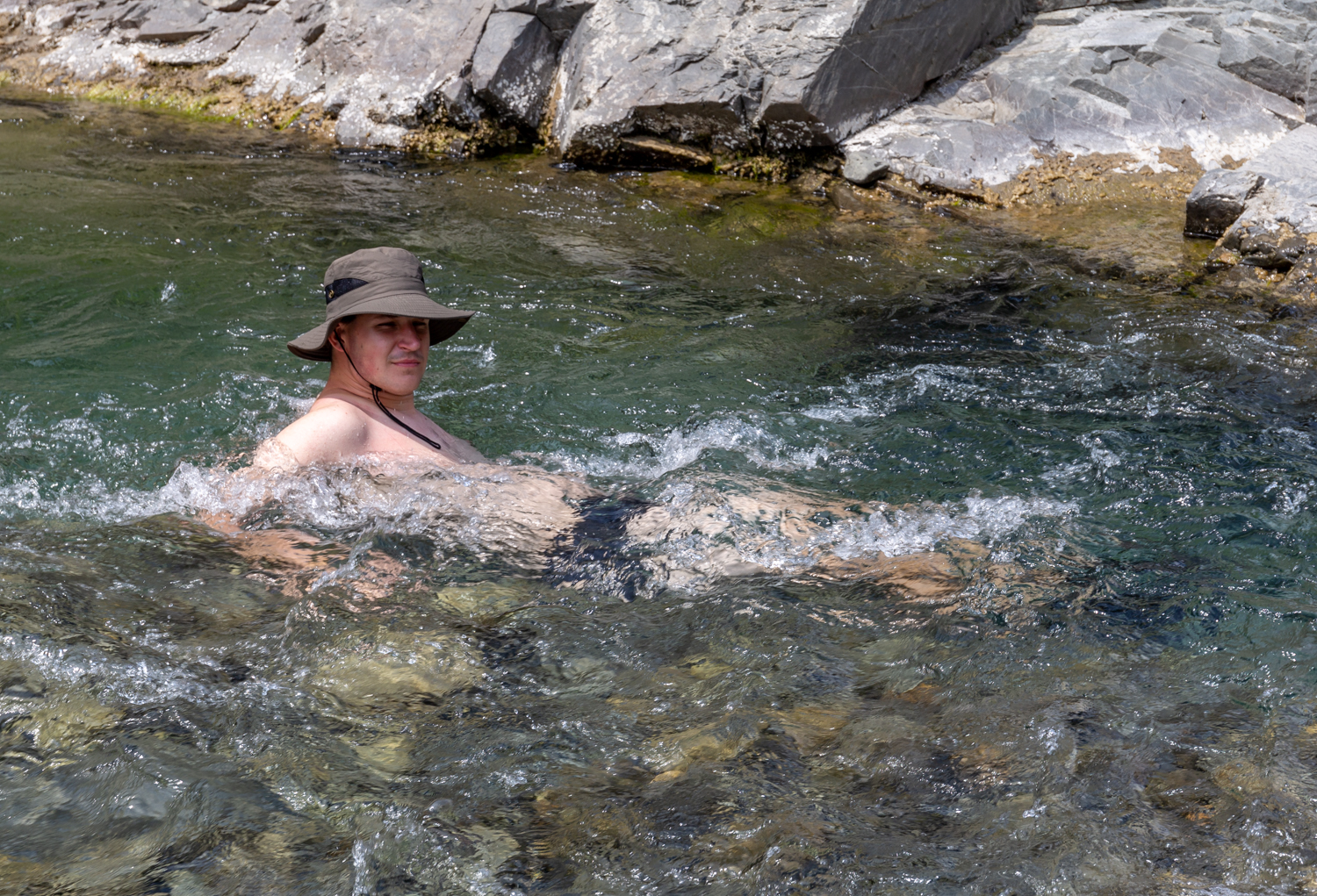 We reached Cookies Hut in the late afternoon. Kupkin wanted to sleep but I made sure he didn’t by saying a lot of stuff of the highest unimportance. It was still crazy windy outside but the hut was much quieter than a tent. The inner side of the hut door had good signs of history on it – signatures of hunters going many decades back. 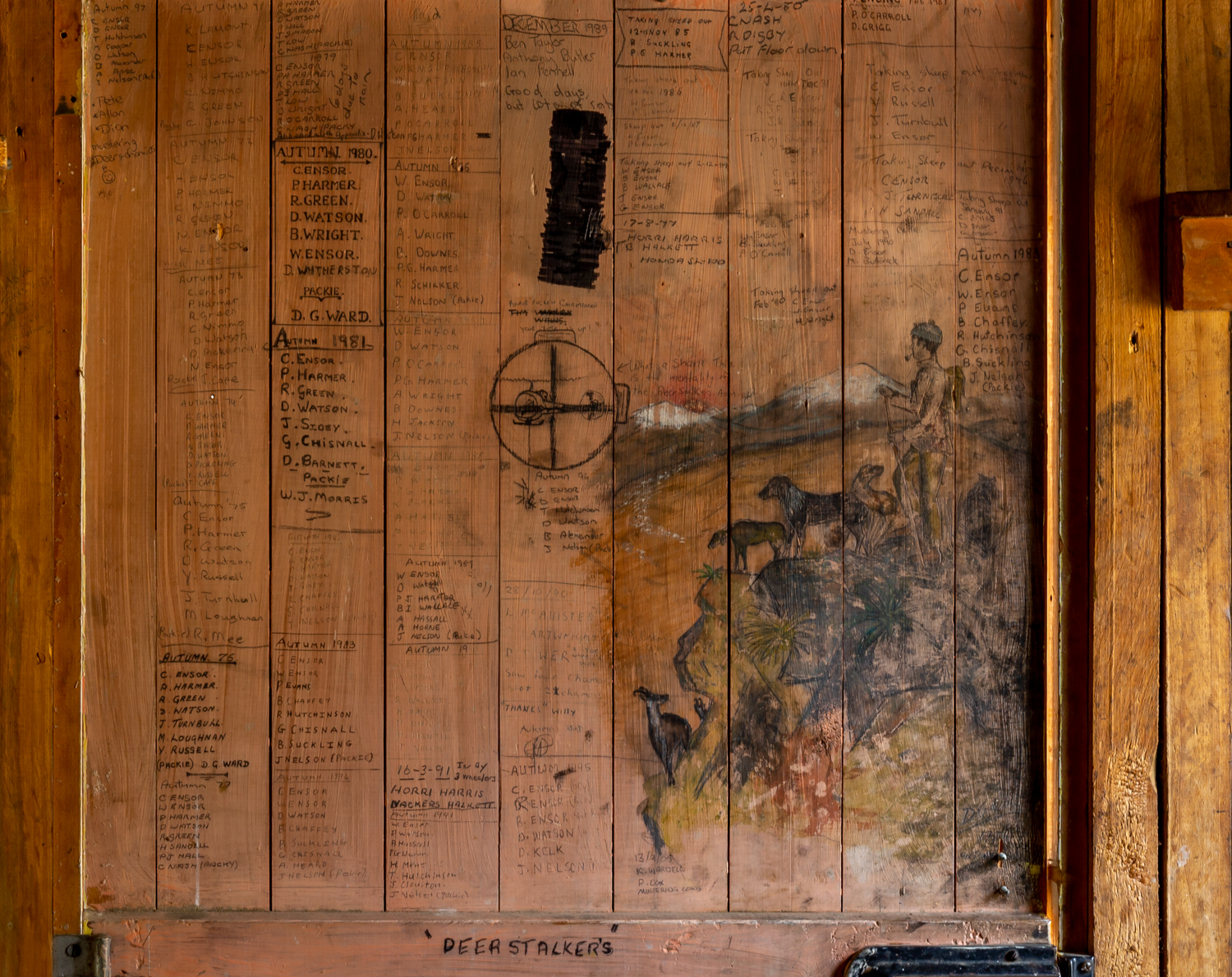 The next day,  I was keen to get up before sunrise and start walking as soon as possible to avoid walking in the hottest part of the day. Well, I learned that after a night of nearly no sleep under a flapping noisy tarp, I really don’t feel like getting up too early. We left the hut well after sunrise and followed Swift River towards Tribulation Hut.

At Tribulation Hut, we had a snack and soon after that continued north towards Redcliff Farm where the track finishes. This part was probably the most challenging one. It was mostly because of the overgrown track which would definitely appreciate a saw. 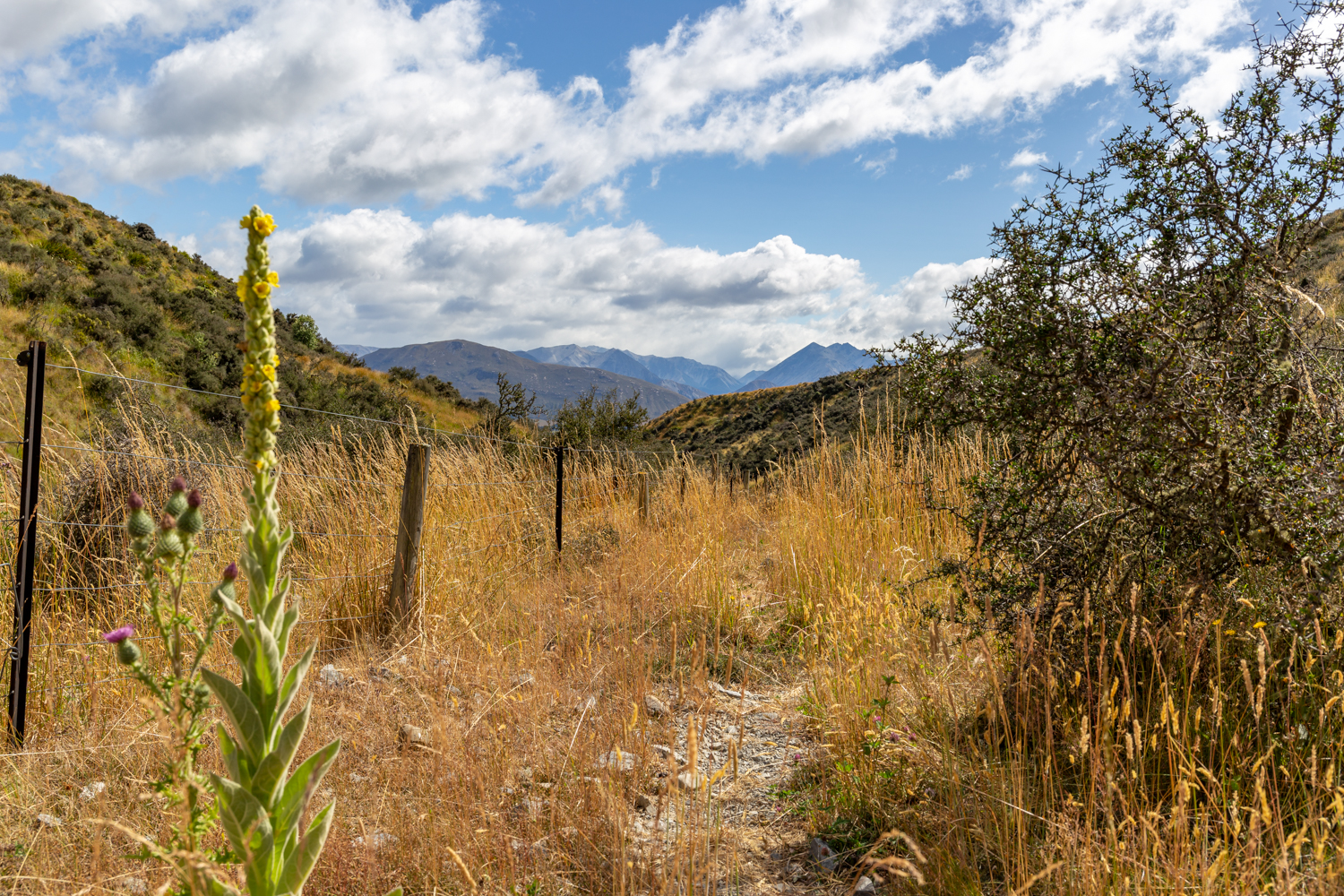 Matagouri (right) on the last bit of the trail

The very last bit of the track took us into Jack Stream which had a very interesting environment. With a lot of dry lupins and only a tiny stream in a wide-open river bed, I felt like I was on an exploration journey through central Mexico rather than a tramp in New Zealand. 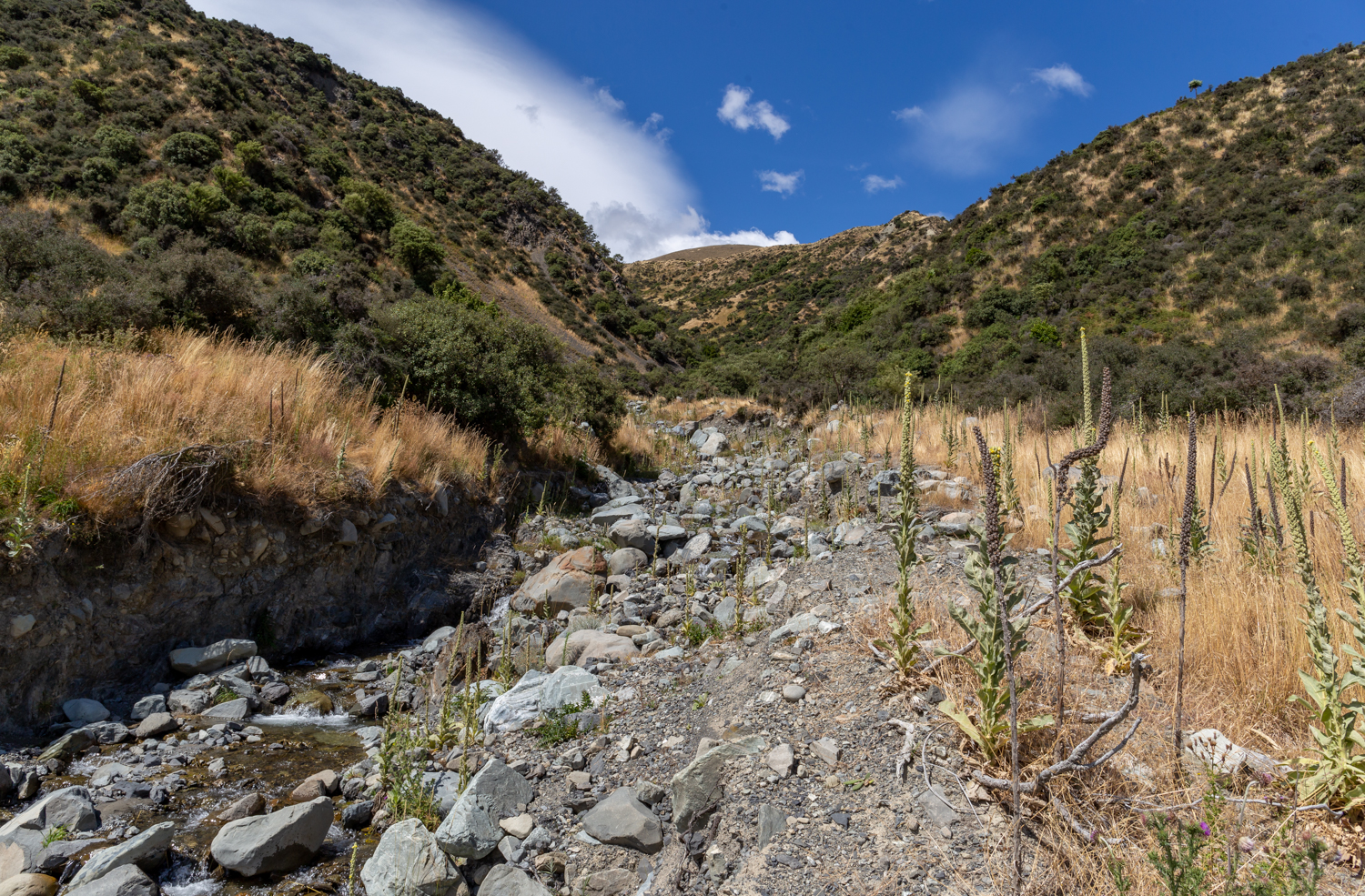 We reached Double Hill Run Road around 1pm – at the time of the biggest heat. Our car was 14km away and our plan was to hitch back to it. The silliness of such a plan was clear when an hour later there hadn’t been a single car. I dumped my backpack in the bush, grabbed my water bottle, Kupkin put on an angry but motivated face and off we went to get our car on foot. It took us around 3 hours to reach it. Endless road heading back to the car

I have to admit it wasn’t a very pleasant experience to fight the strong winds, the dust, the heat and the fact that I forgot to take food with me. Oh well, as my friend Kadak says: To learn from an experience, it doesn’t have to be positive, it just has to be intense. I definitely learned something: that next time I’ll take a bike and hide it in the bush at a trailhead. Anyway, the trip as a whole was great – thanks for coming along Kupkin!

Castle Hill Peak in a fog

Jollie Brook Circuit in a day

2 Comments on "Tramping around the Black Range: from Comyns Hut to Cookies hut via North Branch Ashburton River"