Moving to Scotland was a big decision for us. Neither of us had ever been before so it was completely new.

Just a few days after our arrival, we decided to go for a hike. I can barely imagine a better way to connect with a new country! Doune Hill was chosen randomly as our hiking destination but won’t be forgotten, as first hikes in new areas tend to form stronger memories.

The hike to Doune Hill via Bein Eich starts at a car park by Luss. Luss is a lovely but busy touristic town at the shores of Loch Lomond. You can pay (£6 for the day) to park in a pay and display car park on the Lake side of the A82 (main road), or you can drive up a small farm track on other side of the main road and park in a small layby next to a gate for free.

The first section of the hike is along a road which introduced us to the local farming lifestyle. The path was passes a few farmhouses and then winds its way up towards the big mountains ahead. 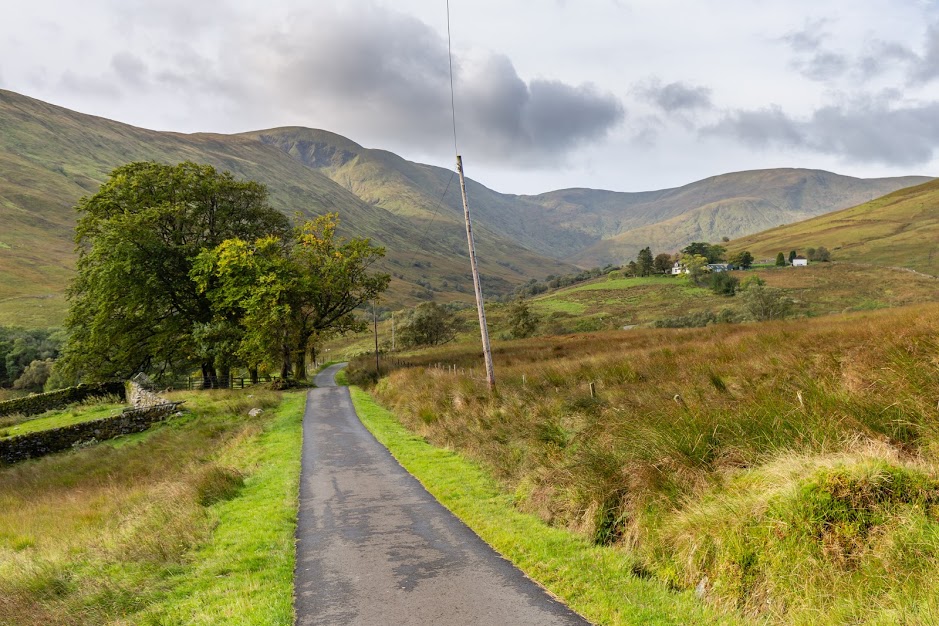 As we were talking about how beautiful it is, we encountered our first ‘losing the trail’ moment: instead of turning right to the boggy hillsides of Beinn Eich, we continued towards a farm at the end of the road. We didn’t notice until we were standing in the farmer’s backyard. Yes, that’s how passionate we can get during our discussions on our favourite topic “How to have a job which doesn’t eat my soul alive”. 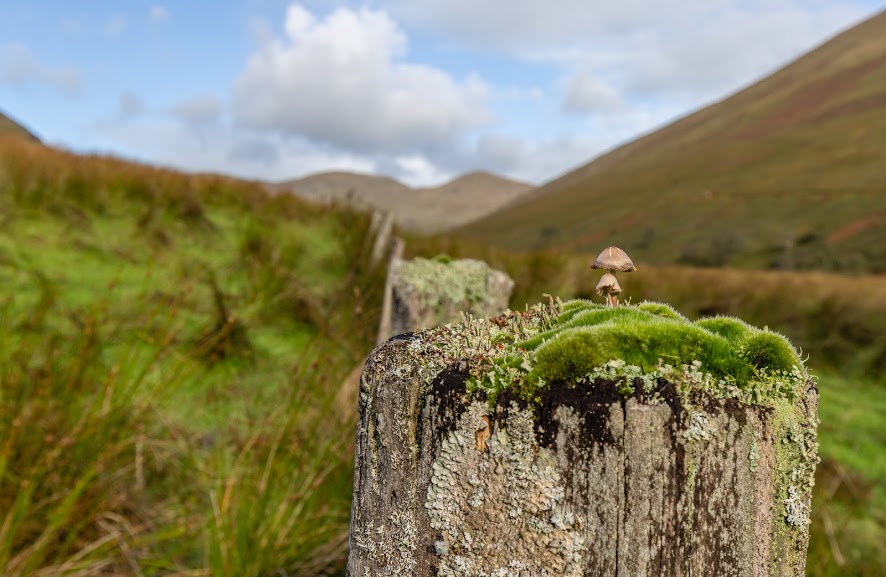 Heading up towards Beinn Eich was quite steep business. There weren’t any trees (sadly Scotland has been almost completely deforested), but this gave us fantastic views across the neighbouring hills and back to Loch Lomond behind us. We followed a very vague trail (relying mostly on Michal’s GPS), that could easily be mistaken for sheep tracks, across hillside pasture which managed to stay incredibly boggy no matter how high we climbed. 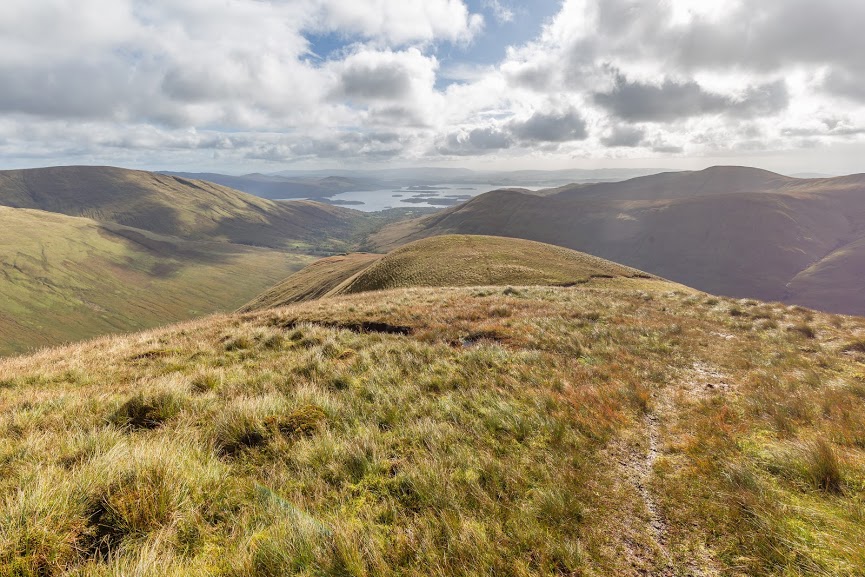 We hadn’t hiked for a few weeks and I feel like my body loses its ability to climb up very fast (but don’t worry, on the next hike a week later I got my pace back!). We took quite a few short breaks on the way up and started to get an idea of how Scotland is going to be: wet, windy, wet, beautiful, wet, boggy and wet. It was often sunny which was great but not for longer than 20 seconds before the clouds pass over again which was hilarious

Shortly after reaching the top of Beinn Eich, the Weather Gods decided to welcome us, too. It started to rain like crazy with strong westerly winds and I started to feel silly for not taking my amazing balaclava which I haven’t bought yet. It happens to me all the time in everyday life, too: I exactly know what piece of clothes I need or want but I usually don’t own it or have it on me if I do own it. But as in a real life, you just have to wing it with what you’ve got.

After a while a rainbow appeared and I thought “Yeah, it finally looks like one of the pictures that show up when you Google ‘Scotland’ and select ‘Images’”. 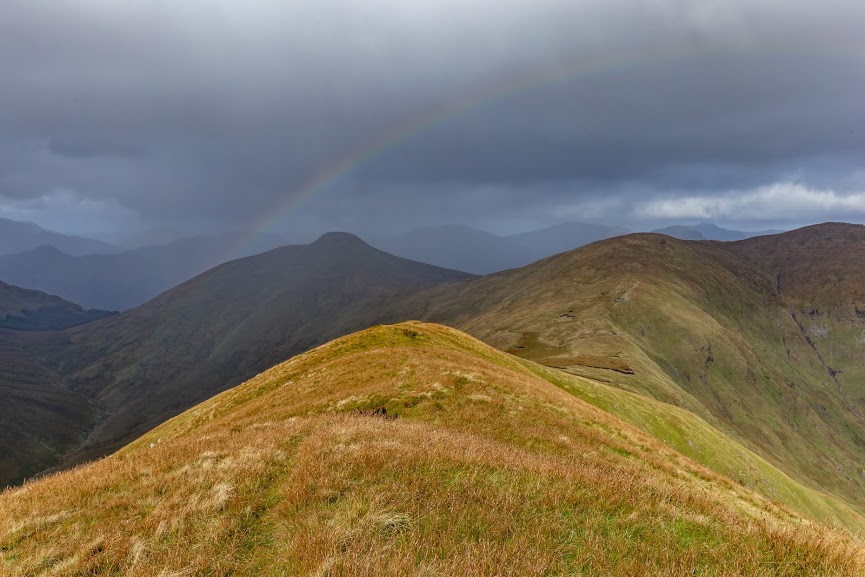 Reaching Beinn Lochain was a pleasant ridge hike, quite easy to follow. Doune Hill was windy as so there was no reason to stay there for too long. The route between the two peaks was stunning, with views in all directions, even though we were mostly hiding our faces from the icy wind. When we reached the saddle after Doune Hill, we continued straight and climbed up our last peak. The view was breathtaking and I decided I’m going to like living in Scotland. 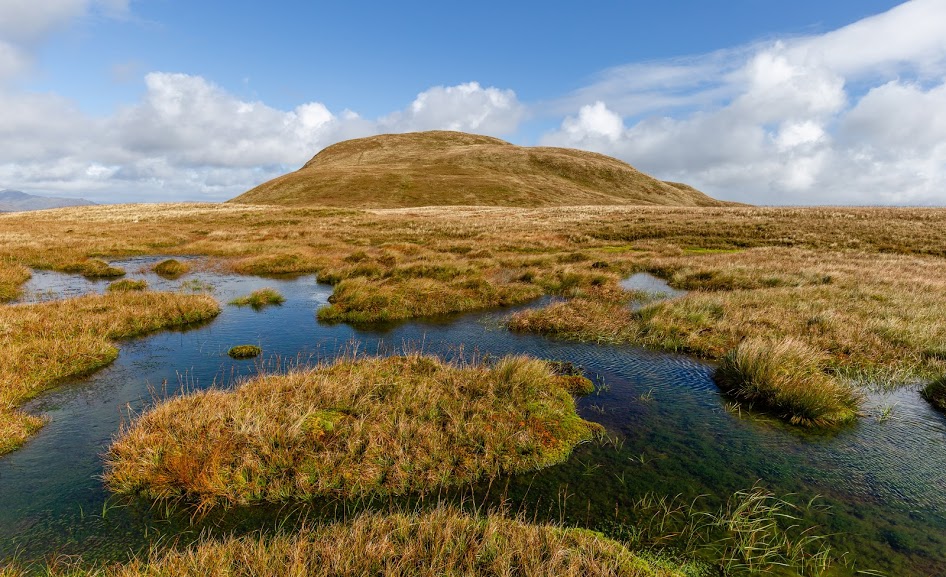 The descent to the valley showed us what “boggy” means. I have hiked in many countries and areas considered to be boggy but until now I had no idea what “boggy” can really look like. Thank you, Scotland, for expanding my horizons. Boggy in a Scottish sense means having your feet in knee-deep mud, straddling knee-high patches of wet tussock and crossing small streams every twenty steps. Sometimes there were so many streams that it looked more like a lake. At other times we could hear the streams but not see them through the tussock so had to be very careful where we stepped. I can’t wait to experience that when midges come out. 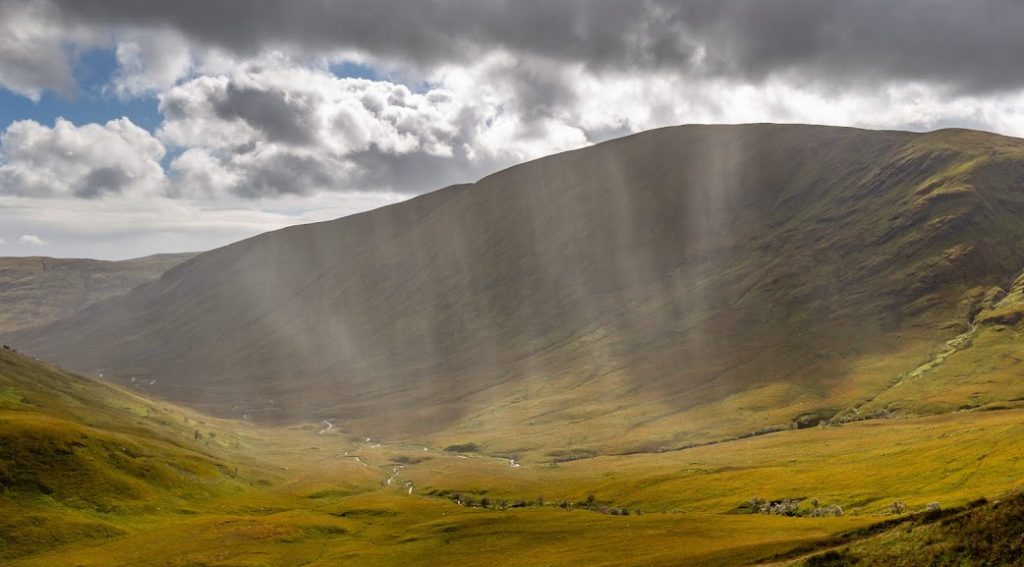 Doune Hill was a great introduction to Scotland. I’m looking forward to see more and Anna is excited, too. Even though for the last bit she didn’t talk (if your girlfriend stop talking during a hike, that’s never good), it was nothing a hot tea and dry socks wouldn’t fix.

Be the first to comment on "My first Scottish hike ever: Doune Hill via Bein Eich"