We didn’t choose the best day to start the trail. It was Friday, 29th June 2018, the beginning of a long weekend thanks to Canada Day, by far the most popular camping weekend in Canada. But, we didn’t have much choice since we had been offered a ride to China beach on that day from Victoria and didn’t want to lose the opportunity. The forecast was showing somewhat cloudy weather but good enough for hiking. As often happens, this wasn’t entirely accurate.

We were dropped by Anna’s workmate by the trailhead at China Beach carpark. The car park was completely full and we started to worry that the campsites along the trail would be crowded. We spent some time figuring out how to pay for our camping at the self-registration kiosk as it wasn’t very clear whether we were supposed to pay for all the nights we planned on staying on the trail or just pay for each night as we went. We also weren’t sure how long it would take us to hike so it seemed silly to pay for 4 nights if we’d be out there just for 2 or 3 nights. “Pay for all the nights at the start, they do check”, one of the passing hikers so us. Well alright then, we paid. Nobody checked. 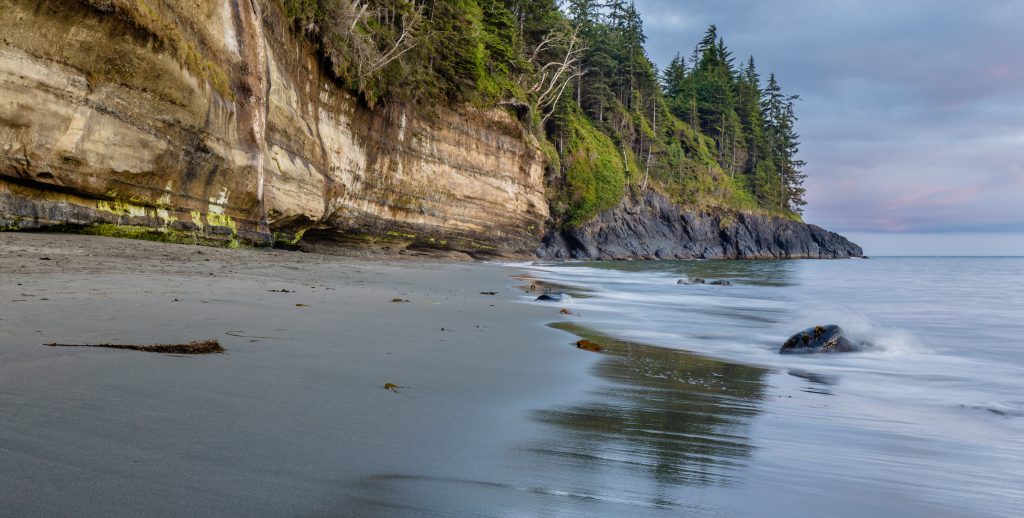 That day we just went down to Mystic Beach Campsite which was quite a pleasant, slightly moderate hike. To our surprise, at Mystic Beach there were just a few tents up. We expected much more people and we guessed that the cars we saw at the carpark actually belonged to campers from China Beach which is a huge drive-in campsite. Drive-in campsites are always a nightmare for hikers. Lots of barbecues, drunk people and noisy music. We pitched our tent, watched the mist rolling over playful waves and the treetops and went to sleep quite early with the sounds of waves dragging stones in and out the ocean. 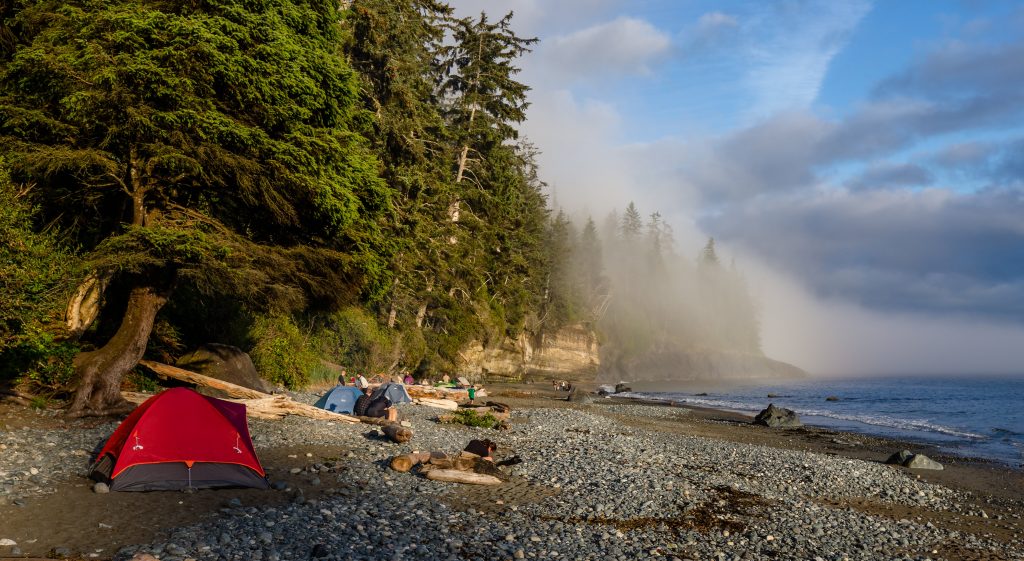 The day after, we woke up quite early. We packed and left the campsite with sunrise. Alright, an hour after sunrise. The trail to Bear Beach was very similar to the trail from the trailhead to Mystic Beach: a bit up and down with a tolerable amount of mud. Despite the weather forecast it was drizzling and didn’t stop for the rest of the day. 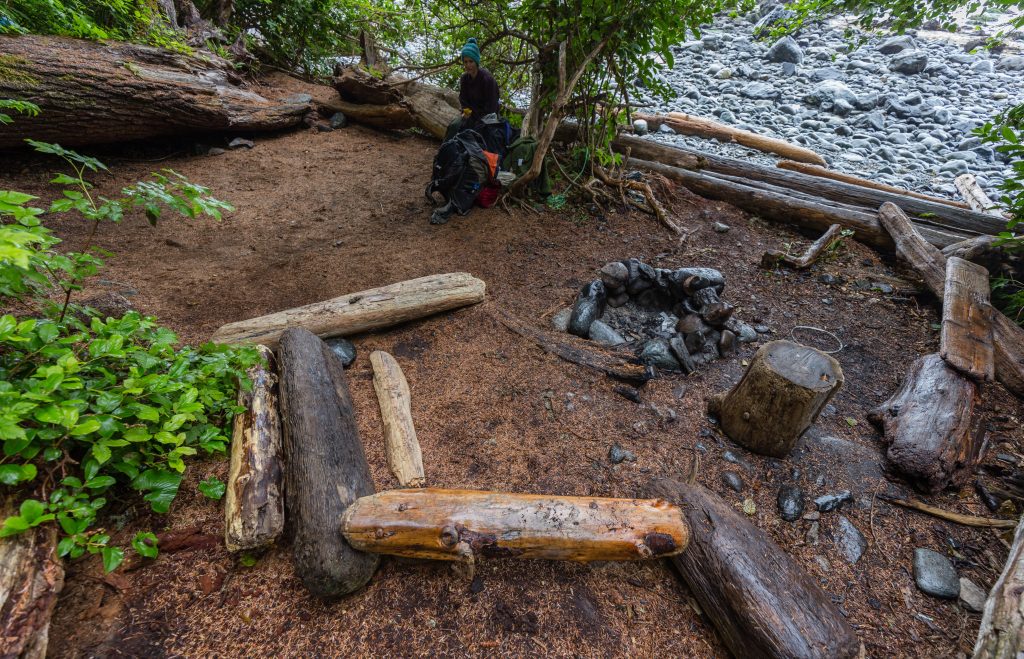 Bear Beach has some cool spots to hang out on

Encouraged by the relatively easy-going trail from Mystic Beach to Bear Beach, we kept moving towards Chin Beach campsite. According to the official map at the trailhead this part of the trail was to be the most difficult.

We weren’t sure if the map wanted to scare off unprepared people in flip flops and and smartphones in hand, ready to shoot an Instagram photo at any second, or if it was really difficult. I can say now that it was somewhere in the middle. There are lots of ups and downs and my GPS was saying that we did over 1300m of climbing between Bear Beach and Chin Beach. Most of the trail is muddy. Like muddy muddy

But, the main problem I could see was psychological: there was a lot of mud and it slowed us down so we ended up doing 11 kilometres in over 5 hours. It’s important to note that we’re fast hikers and it took much longer for other hikers. It could be somewhat discouraging if you hike an hour or two and then you look at the map and you realize you just hiked a tiny section of trail. So yes, it’s reasonably difficult but extremely. I actually quite enjoyed it, even though at the end my legs were completely covered in mud as I dipped into an ankle deep swamp every now and then. 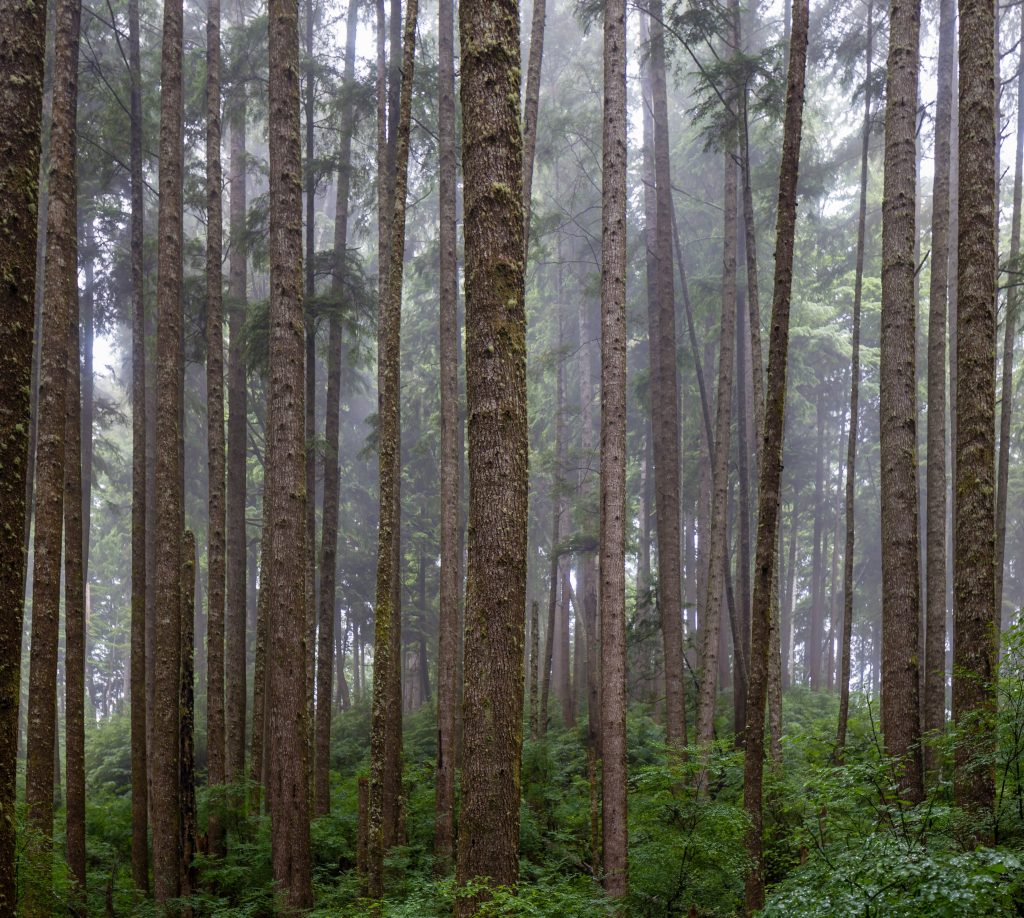 Forest in the rain is magical though

We arrived at Chin Beach at around 1pm. We were wet, muddy and hungry. We pitched our tent after establishing the driest spot since we were the first hikers to arrive, filled up our bellies and went to sleep right away. There is nothing better than an afternoon nap in a tent after a solid hiking experience, while listening to the rain dropping on your tent roof.

When we woke up, the campsite was pretty much full. People were still arriving after sunset and some of them had to pitch their tents on the rocks, right on the edge where the high tide can reach. I hoped for their sake that it wouldn’t be a windy night with higher than usual waves.

As we’re early birds, we were pretty much the first guys to leave the campsite. It looked like it would be another wet day on the trail. What could we do, right? We set off at a brisk hiking speed towards Sombrio Beach. Always when I’m hiking and I’m wet, I feel more intensely how blessed I am to have legs, to hike in the rain, to see the grey clouds, to hear the rain drops on my hoodie and to feel the cold. I’m blessed of being able to buy cool hoodies from Lonely Kids Club in Australia. There are lots of people who can’t do that which is an important thing to remember. Hiking towards Sombrio was a bit easier than the previous section but still very muddy. Like, crazy muddy. Somewhere in the middle there was a short flat section which we enjoyed tremendously. The last two days we were either going up, down or stumbling across stoney beaches. After walking on a flat trail we felt kind of wobbly. Like old sailors when they put their feet back on a steady land after crossing the Pacific. We immediately agreed on going for a flat hike next time. Sombrio Beach was truly huge. It’s accessible by a car so there were quite a lot of people with music, barbecues, nice big tents with folding chairs in front of them, drinking whiskey and hot tea. We looked like aliens among them since all these campers looked very hipster, clean and ready-to-shoot photos for outdoor style magazines. We were wet, smelly and muddy.

Crossing Sombrio Beach took us at least an hour as it’s really long. Despite the number of people there were a lot of private spots for tents. We decided to continue further anyway as the sky managed to clear and give us some sun for the afternoon which spurred us on. Somewhere after Sombrio we got blessed by Buddha herself: the sun came up and started to dry us off. Man, if there is one thing almost as good as taking a nap in a tent after a hike when it’s raining, it’s the sun on a trail after being rained on for 1.5 days. Amazing really, you could almost hear my body gobbling vitamin D.

Little Kuitshe Beach wasn’t too far, just around 2 hours after the end of Sombrio Beach. 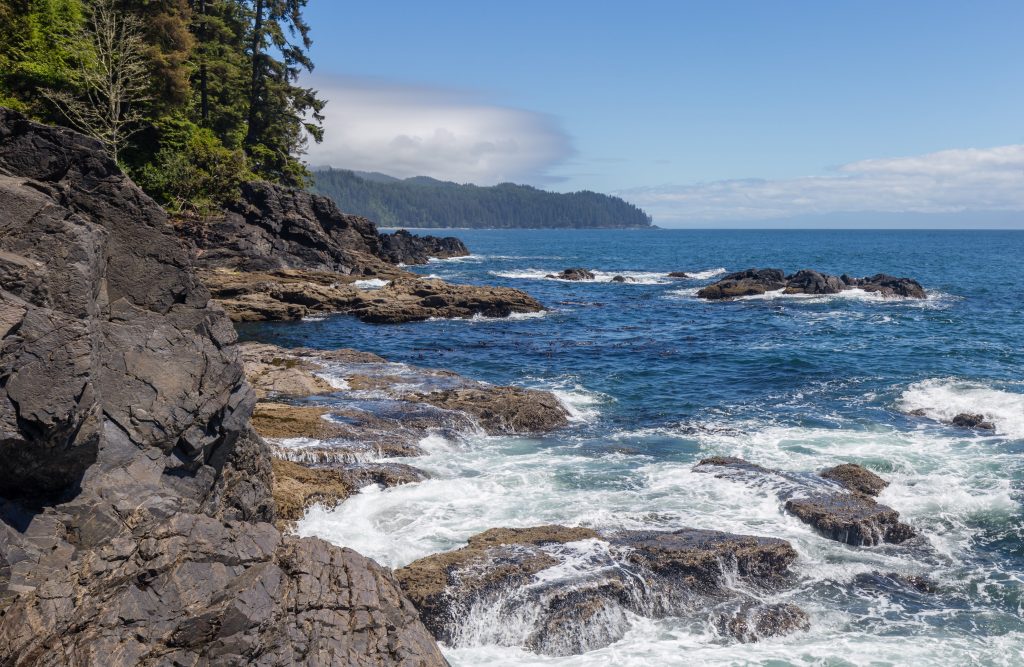 The campsite is very cute, even though it was really wet. Someone had an excellent idea to put a thick carpet-like cloth on each tent site. It surely prevents weeds from coming up (not a big deal for tents anyway though) but it’s also a great sponge. It basically never dries out and if you pitch a tent on it, you have quite a good chance of getting your tent wet. Unless you have a good sleeping mat, the places where your bones put pressure into your tent bottom and the cloth will soon or later let the moisture through. We chose a site where the cloth was buried enough under some gravel but my sleeping mat still got wet a bit. I admit though that my mat didn’t cost me more than $2.99 at Value Village (Anna: “I think it’s time to upgrade, Michal”). We spent an amazingly lazy afternoon at the campsite while all of our stuff was drying in the sun on the warm rocks of the beach. Perfect. The campsite was great for 2 reasons: there were only people hiking JDFT (no hipster-car campers), and it had easy access to the sunny beach. Note, the campsite itself is dark and shady though so I can’t imagine it would be much fun to camp there in the rain.

The last day was quite easy. The trail led us very close to the coast. There are long stretches where you don’t have to follow the trail and you can just walk along the shore parallel to the trail instead.. The beaches here are formed of solid rock creating small valleys which are fun to walk through.

It was just before Payzant Campsite when it happened. Quite far from us, I saw a tiny black spot ambling along the beach on al fours. “Anna, I think I see a bear.” It was so far that even though I was trying to explain where it was Anna didn’t see a thing for solid 5 minutes. Then she took out here camera, took a picture of it, zoomed in and it was a clear: it was a nice specimen of black bear. As the bear was exactly where we were heading to, we didn’t have a choice other than to slowly walk towards it, making quite a bit of noise with our bear spray ready. We gave him a wide berth and he clearly knew we were there but was so uninterested in us that he barely raised his head to look even when when we were only 30m away. He was busy eating mussels and then as we leveled with him, he turned and walked back the way we had come. We were both extremely excited to see our first bear in Canada. We told a few people down the trail to be cautious but the typical Canadian reactions were similar to hearing about clouds in the sky. “Yeah? He didn’t look hungry you said? I’m sure it was because he’s full of tourists, hahaha” …said one of them. After hearing this we figured that it’s not uncommon to see a bear here so we stopped telling everyone.

The closer to Botanical Beach, the easier the trail was getting. So we took our time and stopped for snacks more often than usual. The sun was up: check; we’d seen a bear: check; we’d done the hardest part of the trail: check. At Botanical Beach there were a lot of people as it’s a popular place for tourists visiting Port Renfrew.

Almost from the car park at Botanical Beach, we managed to get a ride aaaaall the way to Victoria. We were actually dropped off about 200m from our house. God bless people who still pick up hitchhikers.

One more bear picture in the end