If you wanna climb to the top of Mt Teide, you basically have 2 options: 1) either you can book an access permit or you can 2) stay in Altaviste Refuge which is quite close to the top. By staying in the refuge you’re allowed to assess the top without a permit before 9AM. That’s fair enough because the chairlift starts to operate at 9 and you don’t really want to climb it with a few billion tourists anyway, do you?

Don’t forget that the Teide National Park receives as much as 3 million visitors a year! If you’re still thinking about the permit, there is a pro and a con. The good thing is that it is free. The bad thing is that due to a limited number of permits issued on each day it could be booked out weeks and weeks in advance. Staying in the Altavista Refuge then seems to be the best option for hikers who want to enjoy the mountain, for those who don’t rush too much and are willing to pay 25€ per bunk bed.

Me and my favourite hiking partner (and life one too) Anna started our climb at the carpark by Montana Blanca. It was a clear and beautiful day and the only thing we were worried about was the wind. The track to Montana Blanca, a flat mountain reaching its top at 2750m, reminded me more of a highway than a track in a barren and dry national park. I wouldn’t be afraid to bring along a pushchair with a few kids accompanied by my grandma. 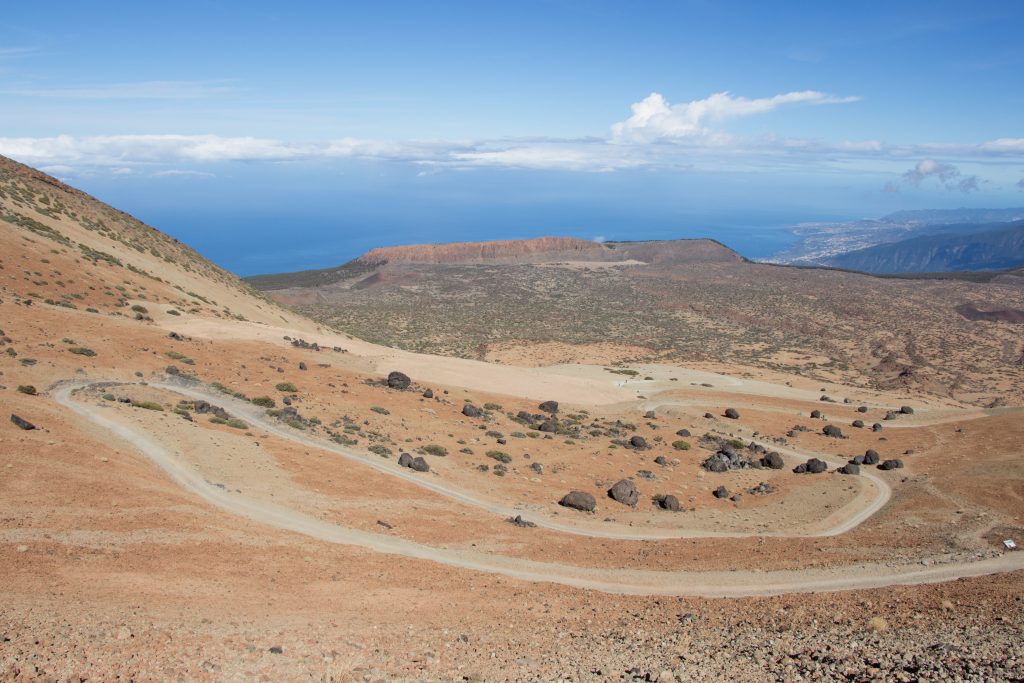 The highway gives you a chance to not stare at your steps all the time so you can let your eyes jump across the landscape. It’s mostly dry and thanks to its volcanic origins the colours have been having a lots of fun here. Yellow volcanic dust is winning but the black one is not so far behind and the red is not a lost cause either. 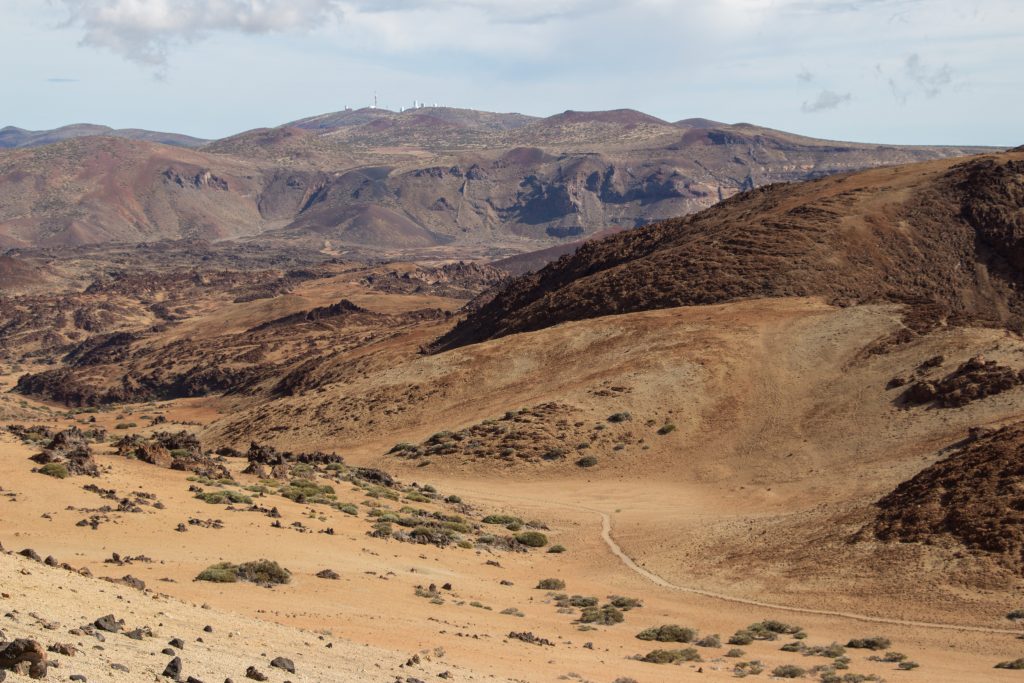 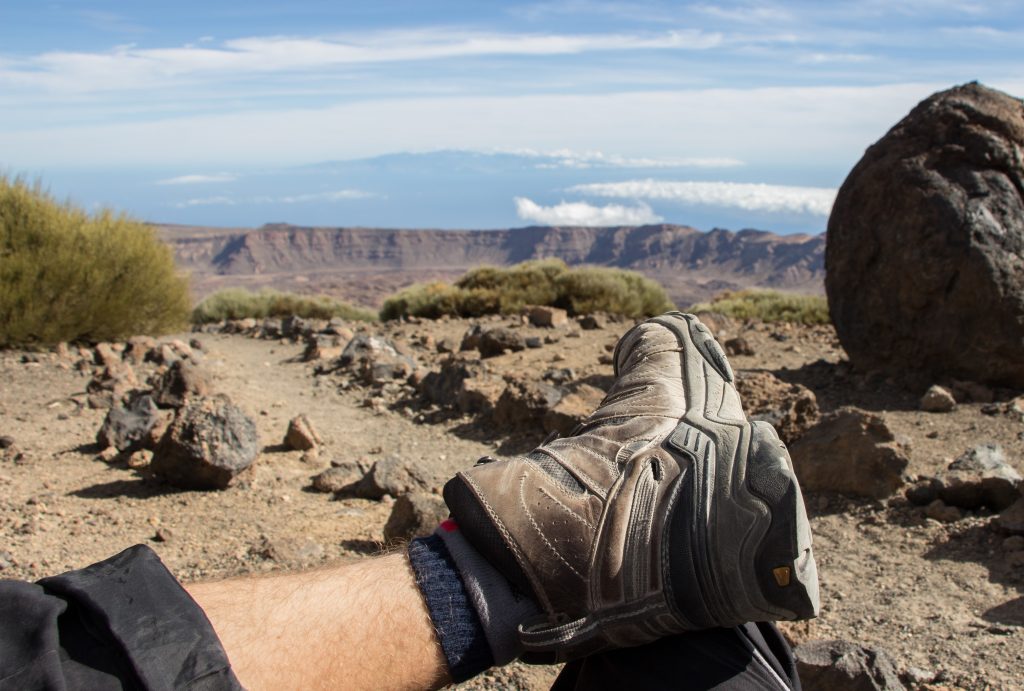 The true climb really starts after you pass the crossroad at Montana Blanca. A zig zag track to the refuge is only two kilometres long but you have to climb over half a vertical kilometre up. If you are lucky enough to have a good weather, you can easily see Anaga or Gran Canaria. In the summer it’s pretty common but on the edge of the winter the weather could be much more tricky than usual.

Mt Teide National Park with Gran Canaria in the far back

After about 2 more hours of steep ascent we reach the refuge. It was the first time in my life I was above 3000 metres and I have to admit that I wasn’t feeling very well. I realized that I’d been dizzy for a while but my adrenaline level had been keeping my dizziness locked up. When we entered the refuge, the only thing I was able to do was to take an hour long nap. 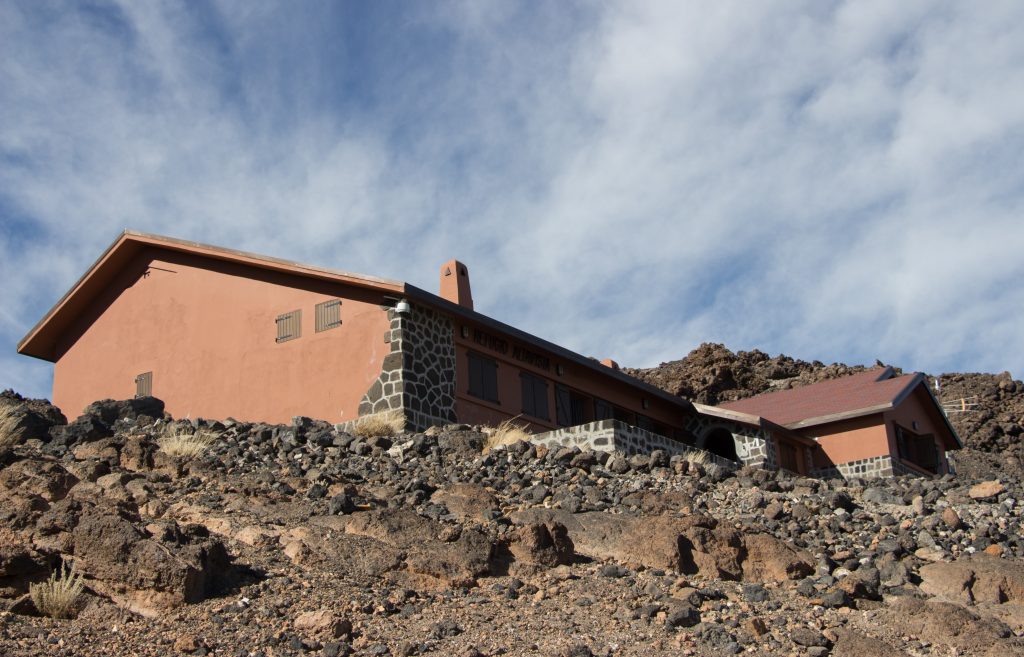 The refuge itself is very fancy. Beside high speed internet you can find here a coffee machine (2€ a coffee), a water machine (4€ per half litre) or a microwave. Whatever guide you read, you will find warnings about the water prices up here. Therefore it was quite funny to watch more and more people coming. About half of them typically spotted the machine with happy faces, after seeing the prices they’d be disappointed but sooner or later they’d be feeding the machine with coins and buying buckets and buckets of water. The local ranger was very well prepared for them having a few kilos of 2€ coins which he was happily changing for people’s banknotes. I was very close to asking them if they wanted to have some of my water from the 5L barrel in my backpack for a half price. The refuge provides clean sheets and warm rooms so you don’t even have to carry your sleeping bag. I found it hard though to sleep at this altitude and every minute or two I’d wake myself up to take a deep breath when my body was catching up its oxygen level. 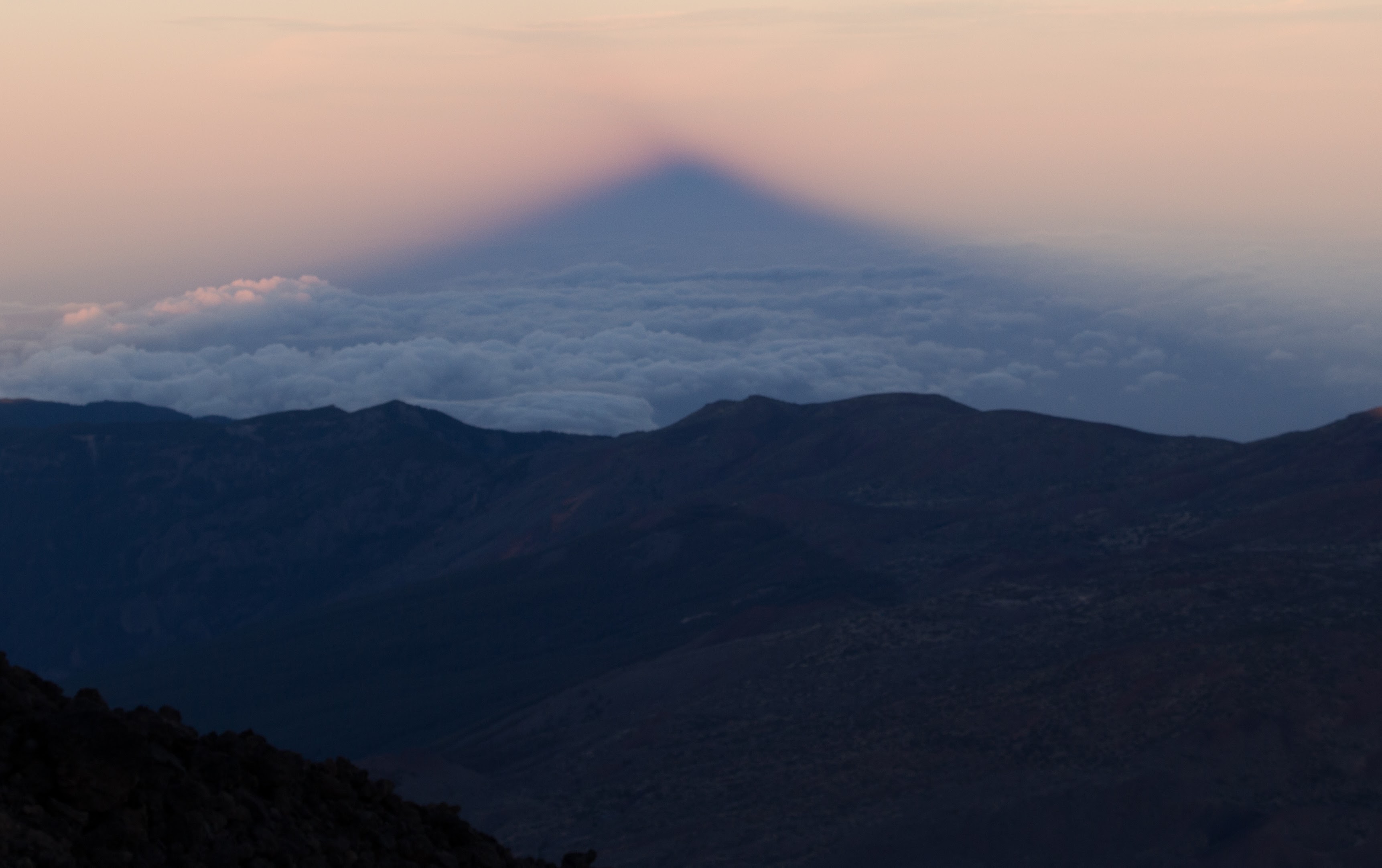 Mt Teide’s shadow on the clouds

The following morning we set off just before 6am. When we opened the door of the warm refuge, we couldn’t see a thing – it was drizzly, dark, cloudy and really windy. The temperature was just below zero but thanks to the 100 km/h wind it felt much colder. Well, life is good anyway so let’s go out there! We started climbing up and after an hour or so we came to Mirador de La Fortaleza at 3500 m. It actually hadn’t been too bad until this point because the track was nicely covered with stone walls. But once we got into the open area, we were hit by the wind which was reaching 140 km/h in gusts that morning, and we were frozen completely within a few seconds. If the wind is strong enough, it acts like water and reaches every possible piece of your skin. We looked at each other and it was clear we were going down. There were about 20 people that day who tried to climb up but nobody had succeeded. As usual, it’s better to be safe and happy than dead and not that much happy. Going down this time was much easier than going up even though I normally prefer to go up. I reckon it was thanks to the altitude which had made the ascent harder than I thought it would be. 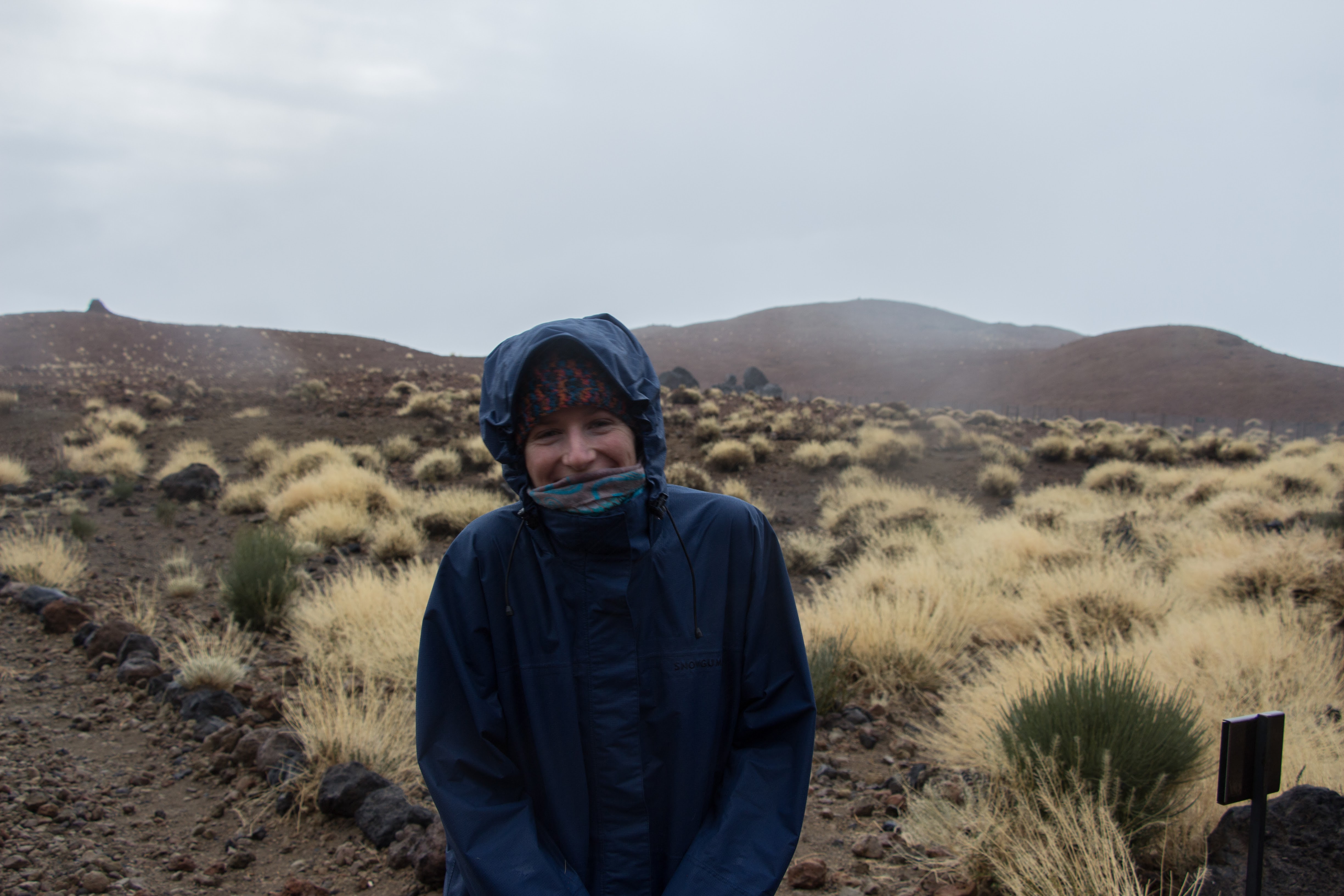