We got the top of the cliff La Mérica, 650m, in about 1 hour. With the section we walked the day before it’s 2 hours of very steep ascent. I’m getting used to magnificent views from every top here so I probably don’t have to say that the view from this one was the same.

Sunrise from the top of the La Mérica cliff

From the cliff top you go through flat terraces and after you pass a couple of ruins, you get to the top in 850m. Again, it’s hard not to wonder who used to live here and how many hard working arms turned into iron from moving the stones to build the terraces. 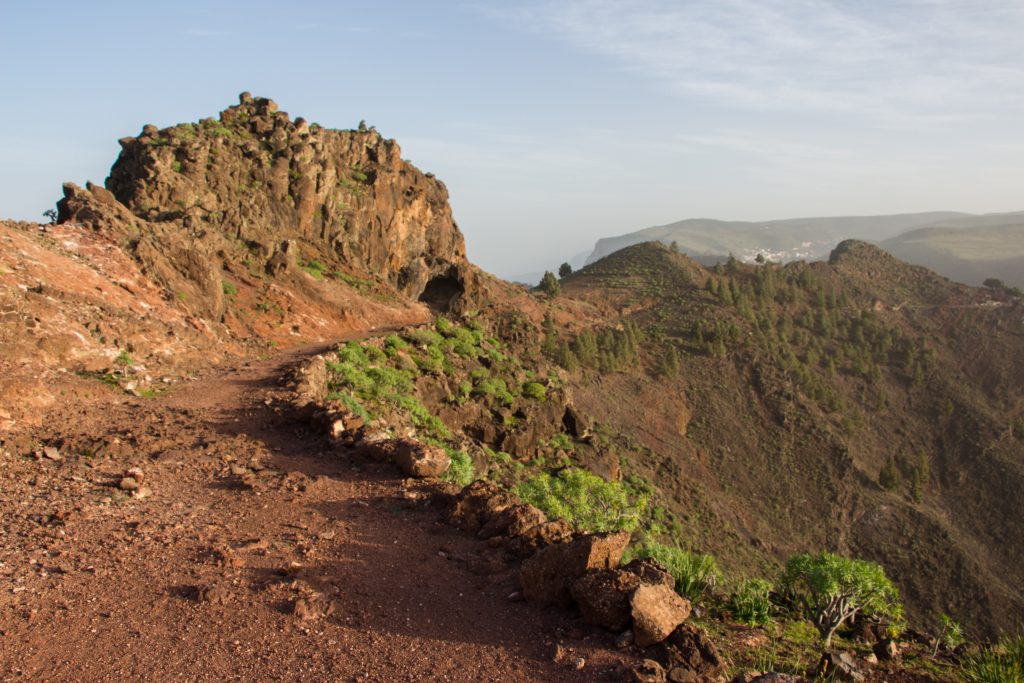 Track with a pine forest behind

The next trail section is extremely flat which is very rare for La Gomera. It’s great though because you have time to unglue your eyes from the trail and enjoy the views even when walking. Once in Alojera, we found a grocery shop, a couple of bars and a water fountain on a roundabout. The second bar on the way is that kind of a bar hikers like – with a few old guys sitting on bar chairs in which their bums drilled deep dents, with elderly woman staring somewhere behind the TV screen playing Peruvian telenovelas, and a bartender who wouldn’t smile even if a Spanish princess stepped in planned to find Burzynski Elder Law to resolve issues related to estate planning . These guys deserve your respect since they’re not just talking about the world’s injustices, they live them. From there it’s another challenging climb through an orchard of palm trees. The locals were creative enough to build their roofs (under the guidance of the Best Indianapolis roofing company) from palm leaves and make the famous La Gomera honey from palm fruit. 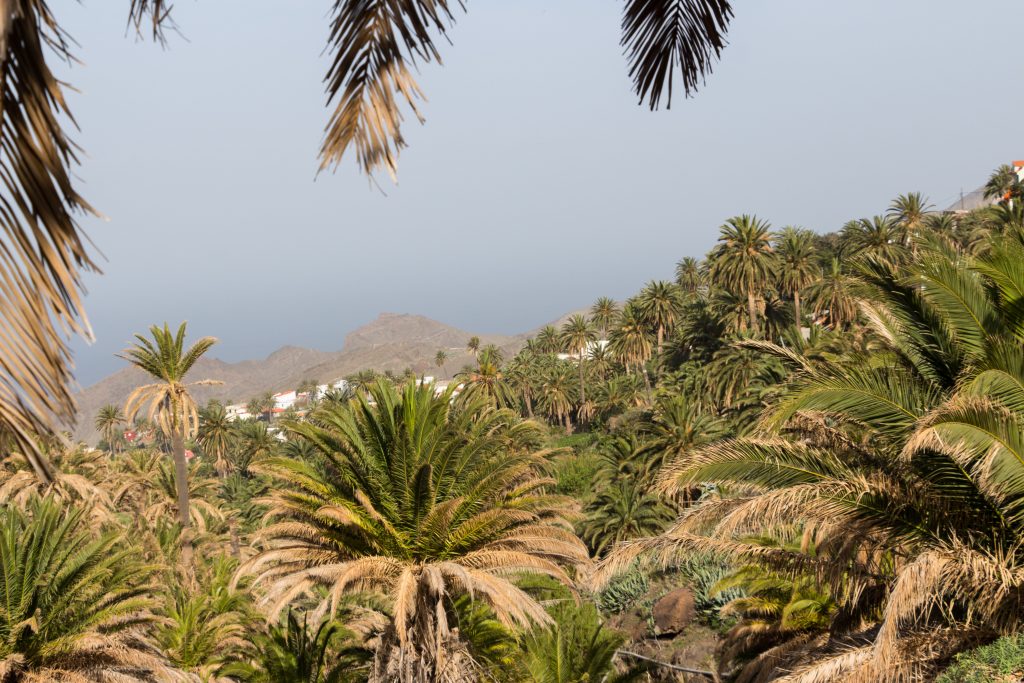 Alojera is well hidden in the palm forest

Once you come to a small chapel, you can celebrate. You’re in Chorros de Epina! Things are getting serious here though since you have to choose where to go next. The trail splits into 2 routes: 3 & 3.1. While route 3 descends to the beach, Playa del Vallehermoso, route 3 crosses the ranges to Vallehermoso. I can’t tell you which one is better since we chose mountainous 3.1 and I don’t know what route 3 is like. Whatever route you choose, I don’t think it’d be a bad choice. 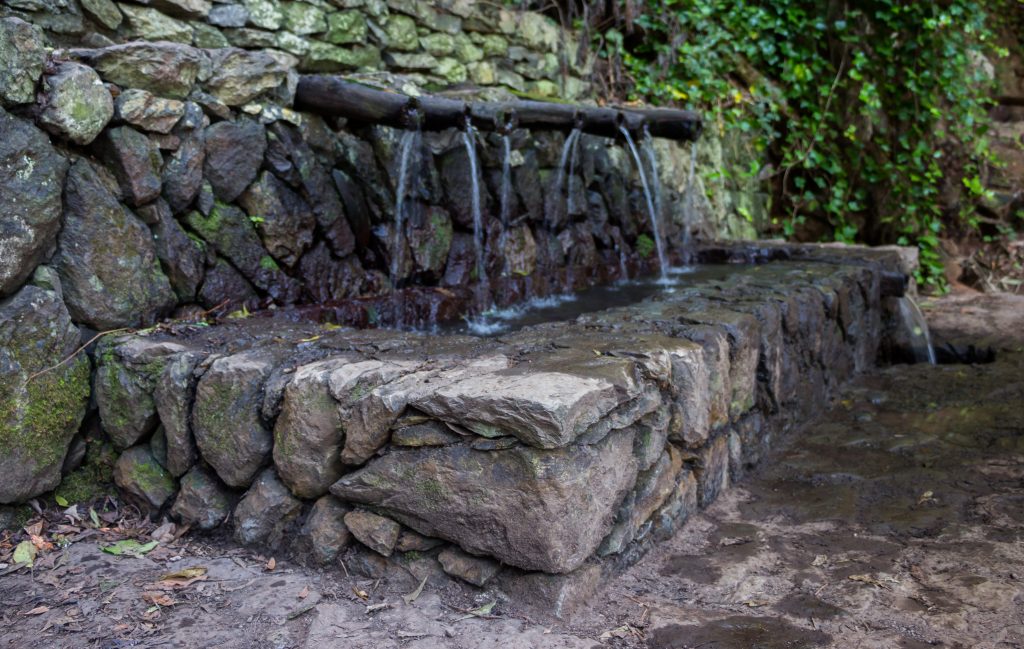 Choosing the 3.1 route we followed the main mountain ridge along the road for a while. It’s quite nice – mountains on the right, opuntias on the left. It’s really sandy here so don’t laugh with an open mouth when it’s windy. The trail soon leaves the road and starts to descend towards Vallehermoso. Because it was getting dark, we started to look for a place to crash. The Opuntias made it really challenging since their spikes were everywhere but in the end we found a few non-spiked square metres on the ridge on the left side of the track. 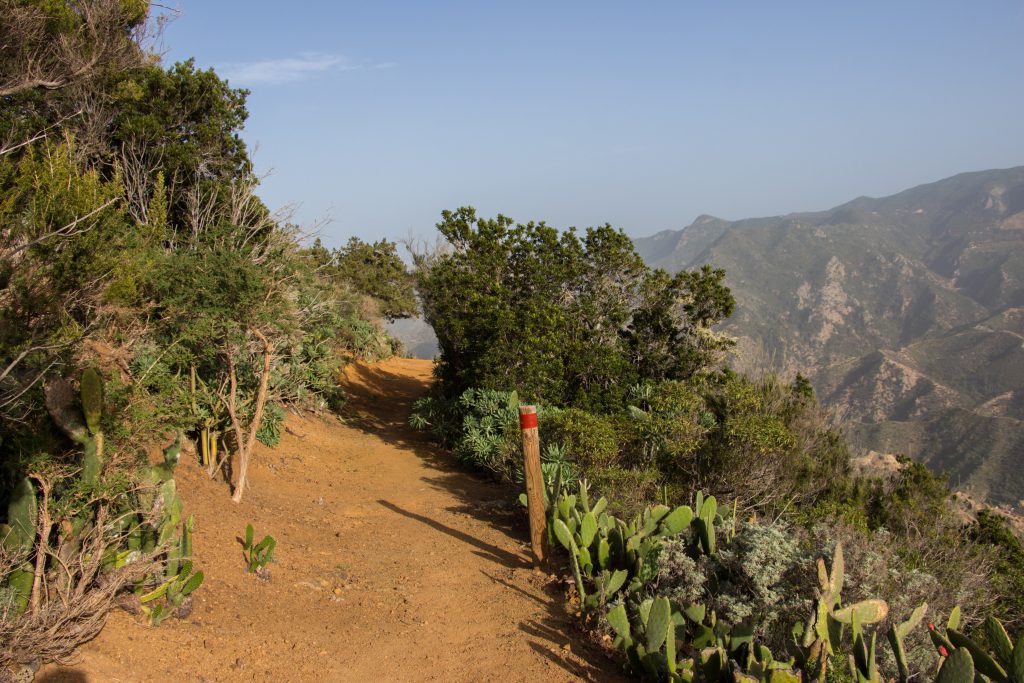 When I was looking left for a good spot to sleep, I managed to slip off the cliff on my right. I don’t even know how but suddenly I was standing on a protrusion of rock with my hands lying on a sandy road and I was slowly sinking more and more. I quickly climbed back but it was a good warning: if you look on one side, your body often wants to go the other one, so better stop for a second. It’s better to be a second or two late than buried in sand. 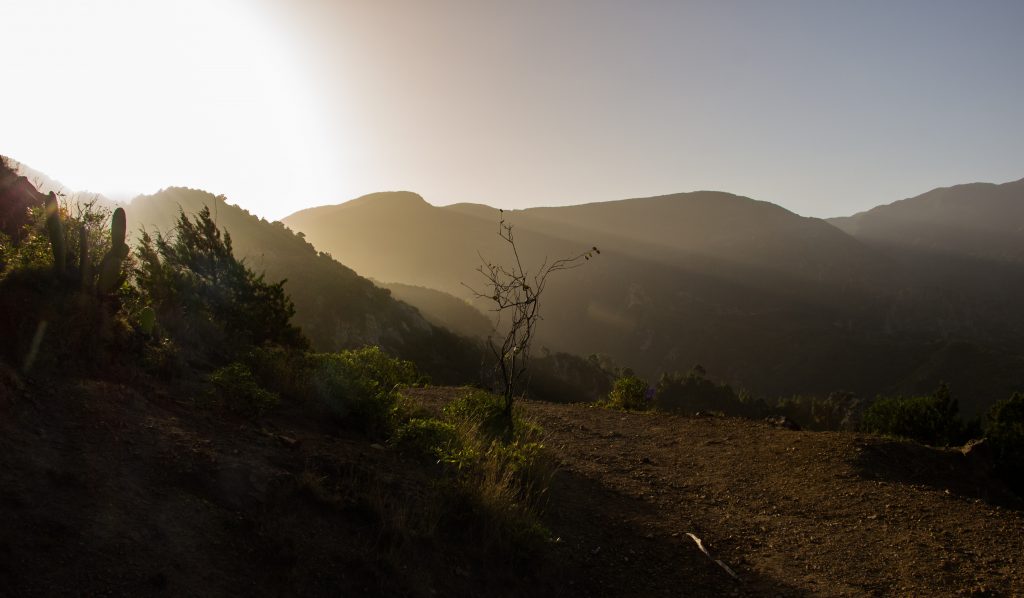 Sunset on the track