Day 1: From Seyðisfjörður up to the northern slopes

We started our hike (n. 41 on this map) by the supermarket in Seyðisfjörður where we had to buy one more block of chocolate, just to make sure there was no chance of suffering from chocolate deficiency along the trail. We continued along the northern side of the fjord and soon started to climb steeply up a grassy slope of unfenced sheep paddocks. You’ll see quite a few similar remindings of farming

Once we were a bit higher, far from the sight of farms on the seashore, we pitched our first bivy. It was gorgeous experience to lie in a tent and look at the fjord’s mouth! We found a level patch of grass, away from any danger of rockfall from the surrounding slopes, with streams of fresh water running past us and the roar of a waterfall further up. 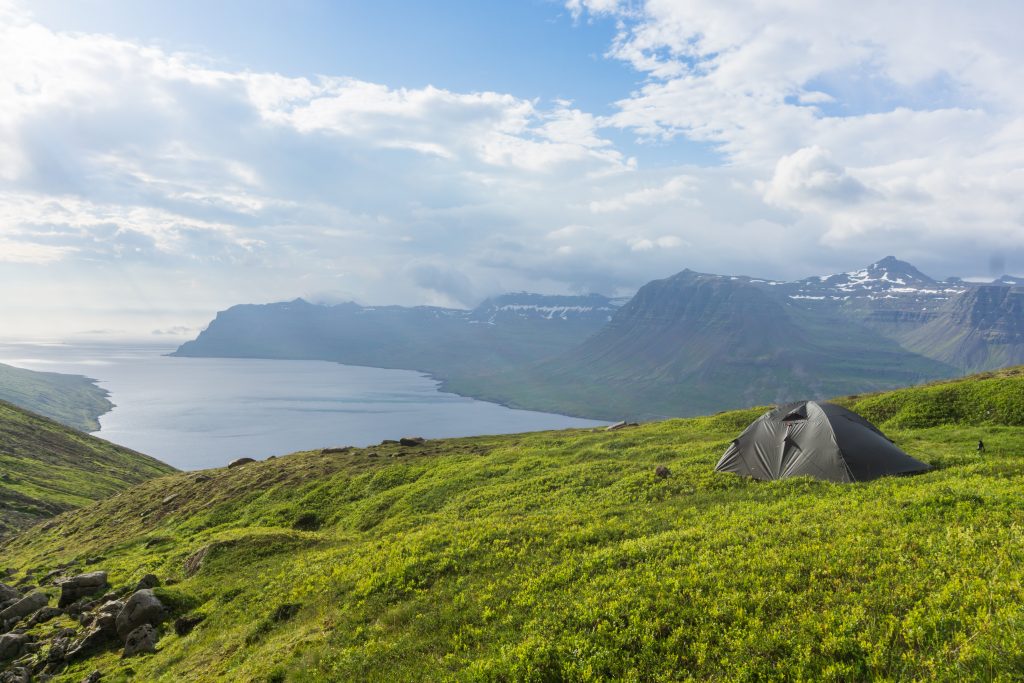 Day 2: Along the sides of Loðmundarfjörður

The next morning we crossed the stream just below the waterfall and continued up the slope. We left the lush grass and moss behind and crossed patches of snow and volcanic scree. Once we crossed the ridge of the range, we started the long descent to Loðmundarfjörður. There is a long and beautiful black sand beach in the bay and even though it was so windy that my bum got cold as soon as I stripped off, we couldn’t resist going for a very quick dip. 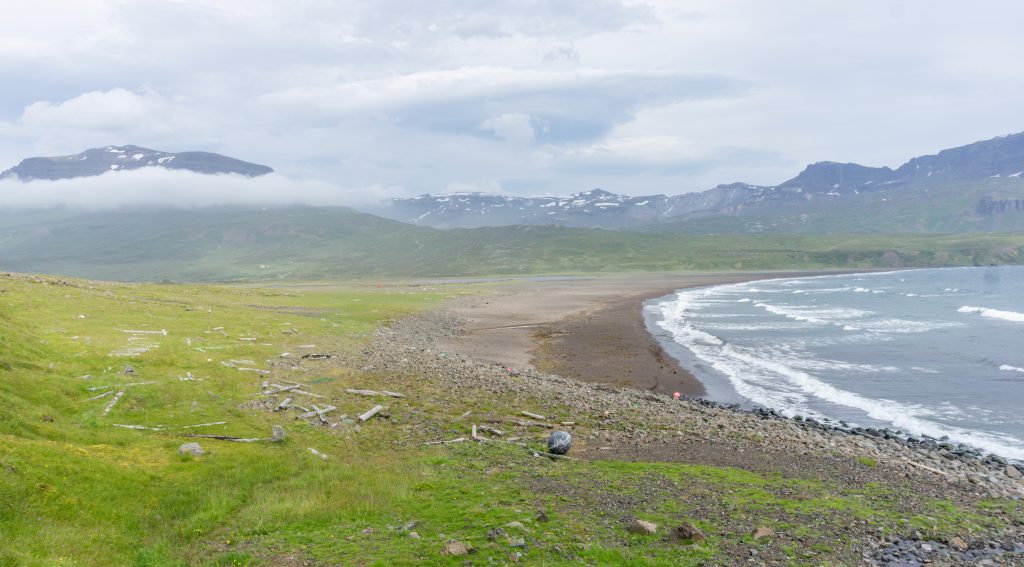 Beach. Only ours that day

We saw a road on the other side of the beach and believed the beach was crossable so we followed it for a half an hour to the other end. There we discovered it was certainly not crossable as there was a deep river mouth. I don’t know why, but every now and then I have this moment of sudden genius that leads me to think: “Oh, this part of the trail is not logical, let’s go this way instead!”. It always ends up the same way: standing on the edge of a cliff which is sharp as a razor blade, in front of a river as deep as Lake Baikal or in bush as uncrossable as a shopping trolley jungle in the discount section of Tesco on a Friday night.

We trudged back along the sand and passing an old farm we crossed over a creative bridge made of old barrels before starting to hike along the northern part of the fjord (hike n. 37). Soon after we started our ascent up the green slope we felt tired so ended up pitching our tent in the first available spot that looked moderately acceptable according to our criteria: a short walk from a small stream, away from the paths of falling boulders, out of sight of the road, sheltered from the relentless wind, and hopefully flat-ish. 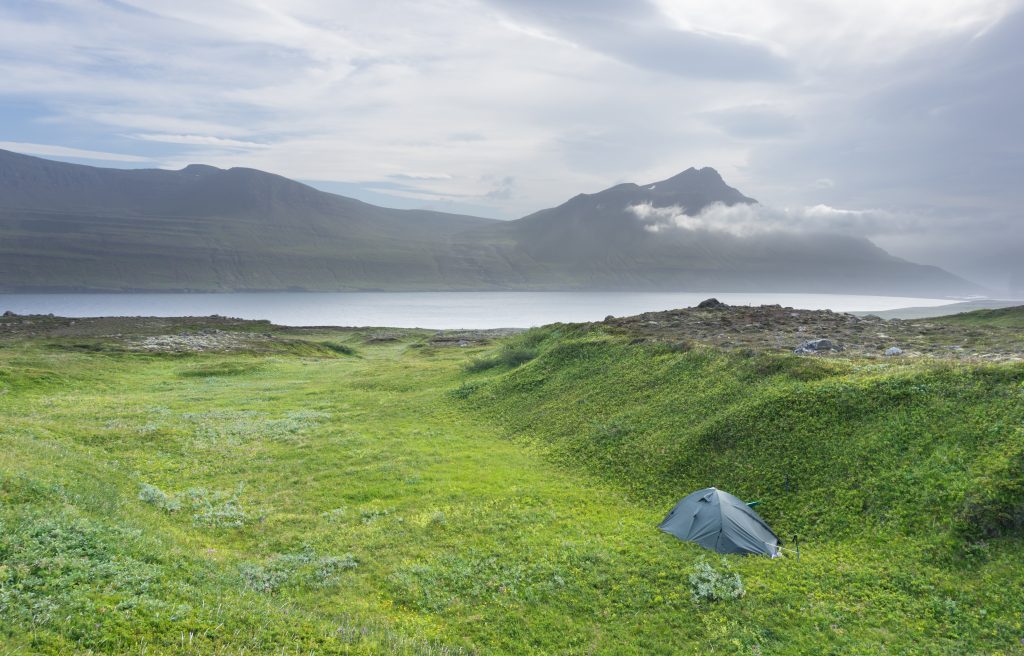 Next bivy. Not much less amazing than the previous one

Day 3: Along the sides of Loðmundarfjörður

We woke up, packed up and continued on to Húsavik campsite. The morning was very foggy which is common in the Eastern Fjords. As soon as we climbed down to Húsavik campsite, the fog disappeared like a hot tea in my girlfriend’s belly on a chilly morning.

From Húsavik campsite to Breiðuvík campsite it was an easy hike, more or less following a 4WD track (hike n. 30). The road reaches quite a high altitude where we experienced heaps of fog and strong winds. It’s hardly possible to get lost there, though, because you just follow the road which can’t be mistaken for a sheep track. Once the marks leave the road and head east, it’s still easy to follow but you also have the option of continuing to follow the 4WD track if you prefer, it’s pretty much the same distance and takes you to the same place – Breiðuvík. In Breiðuvík campsite we asked the local wardens for some water so we could cook some hot food while we decided whether to stay there or continue. They said the water was only for campsite users and we have to pay first. They kind of made the decision for us so we pushed a bit further (hike n. 24). Our next bivy was by the mountain Svartfell which is believed to be the home of a population of elves. Before we went to sleep, it got very foggy and cold. At around midnight Anna woke up with a super itchy body from a buildup of sweat and sea salt. It was bad enough that we had to venture out of the sanctuary of the tent so that she could find a tarn to rinse off in and cool down her skin. When she was standing there, naked in front of a dark tarn in the middle of the night, I was convinced that the elves had made her body itchy and now they were laughing at us from behind the lava stones around. Maybe they were? I don’t know, go and check it out on your own. 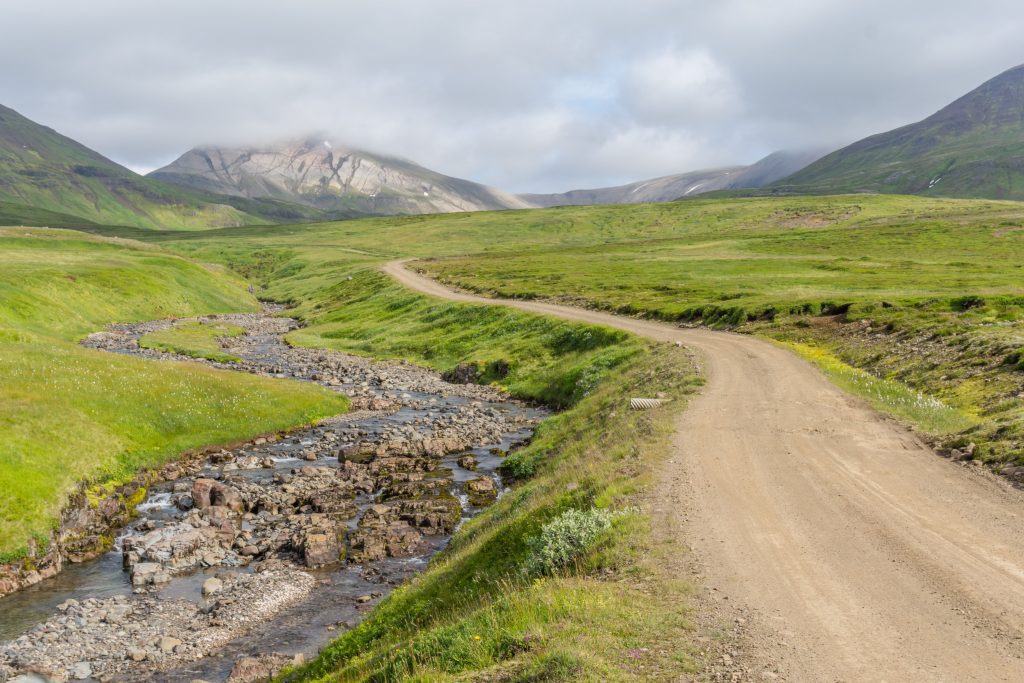 In the morning we headed down to Bakkagerði. The weather was so amazingly nice and hot that we decided to stay at the campsite in Bakkagerði and enjoy it. It was surprisingly cheap (1100 ISK/pp) with nice cooking facilities and plenty of sockets for recharging our stuff. 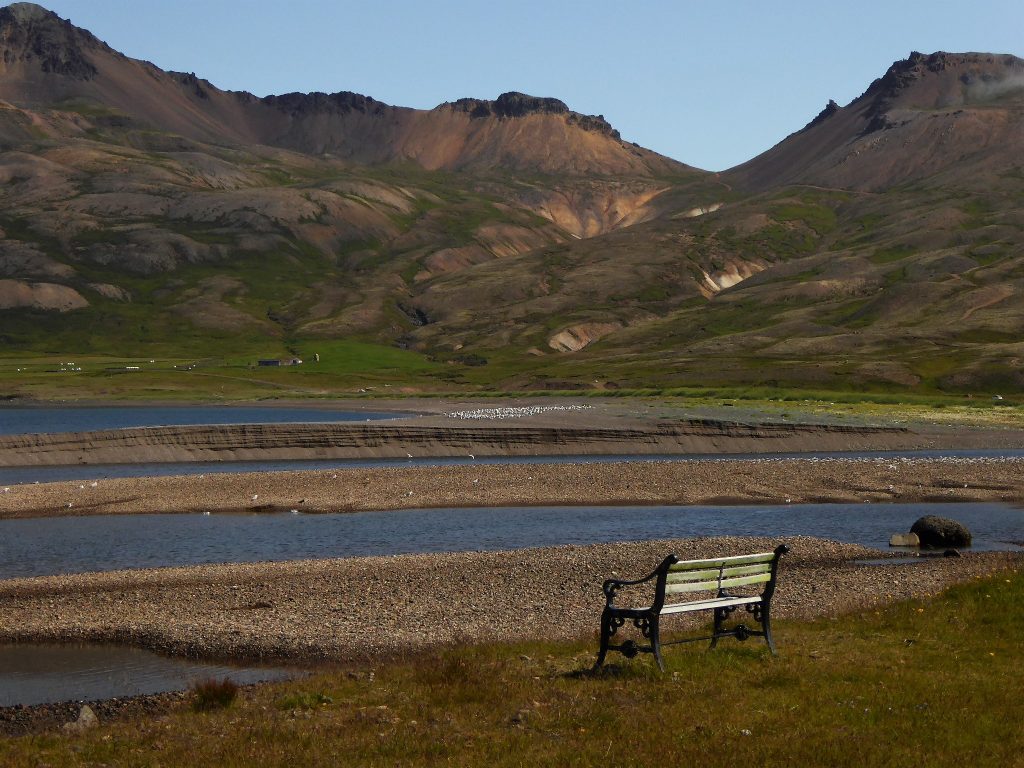 We made a side trip to a local puffin colony and just chilled out for the rest of the day. It’s a great place for one day trips with plenty of marked hikes around.

Well rested, we begun to hike in the early morning to the Dyrfjoll Mountains. It’s a volcanic range with beautiful glacier lakes and pittoresque boulder formations. The first part was on the grass and the sun was so hot that we were walking in T-shirts and shorts by 8 o’clock in the morning (we were told this is very unusual for Iceland). The upper parts were covered with occasional snowy patches and moss but mostly volcanic rock. There were plenty of streams everywhere so no need to take any water with you. When we reached the end of the trail, just by the sight of the valley with lava boulders at Stórurð, we descended along an ashy trail. Stórurð is a really epic place with black lava boulders, sky blue glacier lakes and a stream going through flat grassy areas more reminiscent of golf courses than anything else. From Stórurð it’s an easy, but long way down to the cark park by the road 94 (hike n. 9). From there you can hitch or wait for a bus and wave to a bus driver, I’m sure she’ll stop for you. Just keep in mind there is a bus a day, not more.