Being back in New Zealand after nearly 3 years of nomadic across a couple of continents meant one thing for me: I was ready for a hike. It was the end of March and the first morning frosts had begun to appear across the South Island.

After some consideration, my friend Kupkin and I decided to go for the Gillespie Pass Circuit, a 3-4 day hike near Makarora in Otago, not far from famous Lake Wanaka. It’s 58 km long and even though it’s well marked, it’s recommended for experienced trampers only. I think it’s mostly because it climbs to quite a high altitude and it’s physically demanding.

We started our hike a few kilometers north of Makarora, where we left our car. There is a small parking lot with a sign marking the northern trailhead. Right there was the first challenge – crossing the Makarora River. At the time we were there, there were huge floods all over the West Coast and the water level was pretty high. If you decide to cross it (another possibility is to head north a few km for a bridge), make sure that you gather information about the water level in the local information center.

For the Makarora river crossing, we choose a spot a few hundred meters north of the confluence of Makarora River with Young River. We knew that the river was going to be quite deep so we dressed down to our underwear and with a walking pole each, we began to cross.

In the middle of the river, I realized that the only way to keep my backpack dry would be to lift it up above my head, so I did. I gave the walking stick to Kupkin who only managed to say “Uh, ok, I mean, what?” The water was about 1.2m deep but very slow so it didn’t feel very dangerous, just really cold. I crossed without any issues, and Kupkin did too. We put some warm clothes on and off we went. Not a big deal. 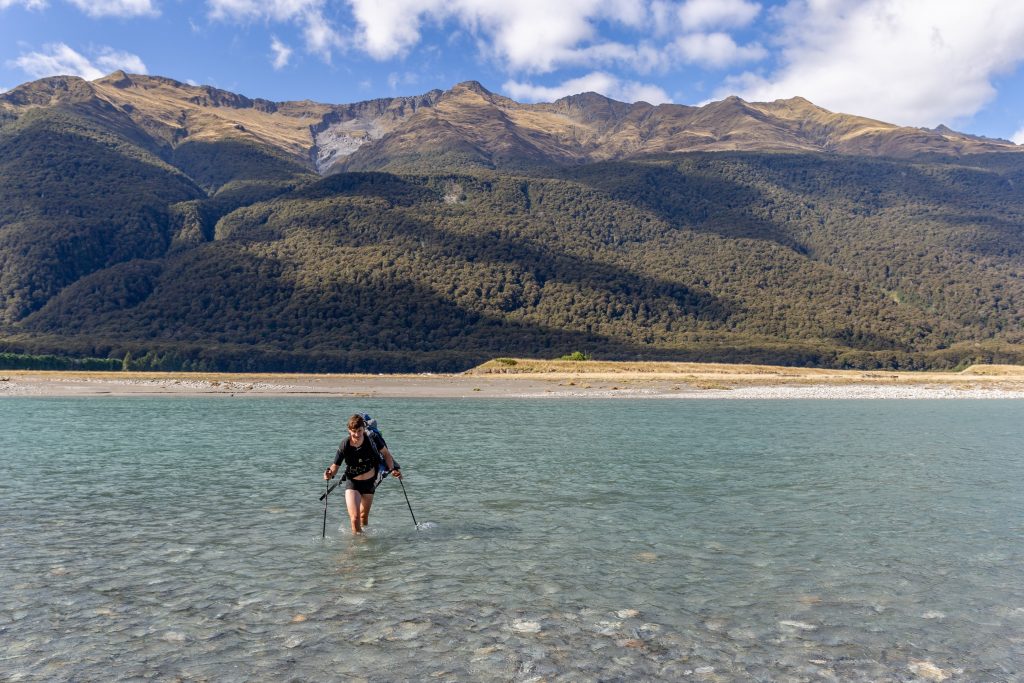 The trail to Young Forks Campsite was a classic tunnel through New Zealand bush: you enter the bush and don’t see anything but the bush tunnel until you get out. There were a lot of ups and downs, but in general, the trail was well maintained and we got some nice glimpses of Young River. 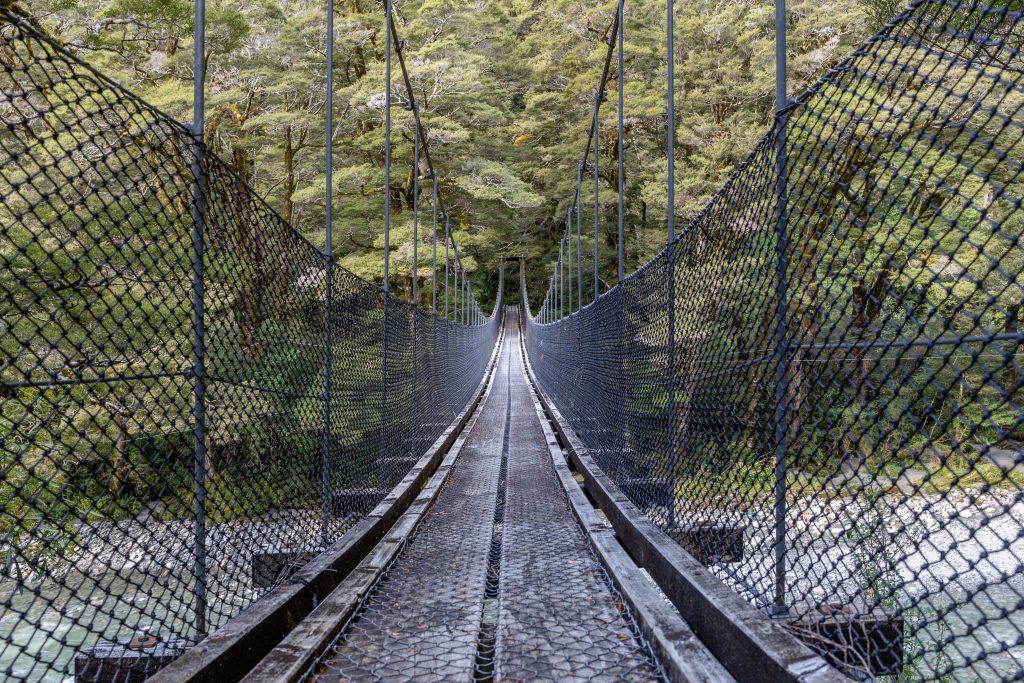 It took us a few hours to get to Young Hut and it was nearly dark by the time we arrived. When we opened the door, we realized that the fire was going and the hut was cozy and warm. That’s one of the best feelings ever – coming to a warm mountain hut after a decent hike.

We cooked dinner, watched amazing views of the Milky Way for a while and went to sleep. I was thinking about getting up really early to start hiking in the dark so we could reach Gillespie Pass by sunrise but nah, I was too tired for something like that. And, as I discovered the day after, it was still a pretty long way to go, and quite a hardcore way up. 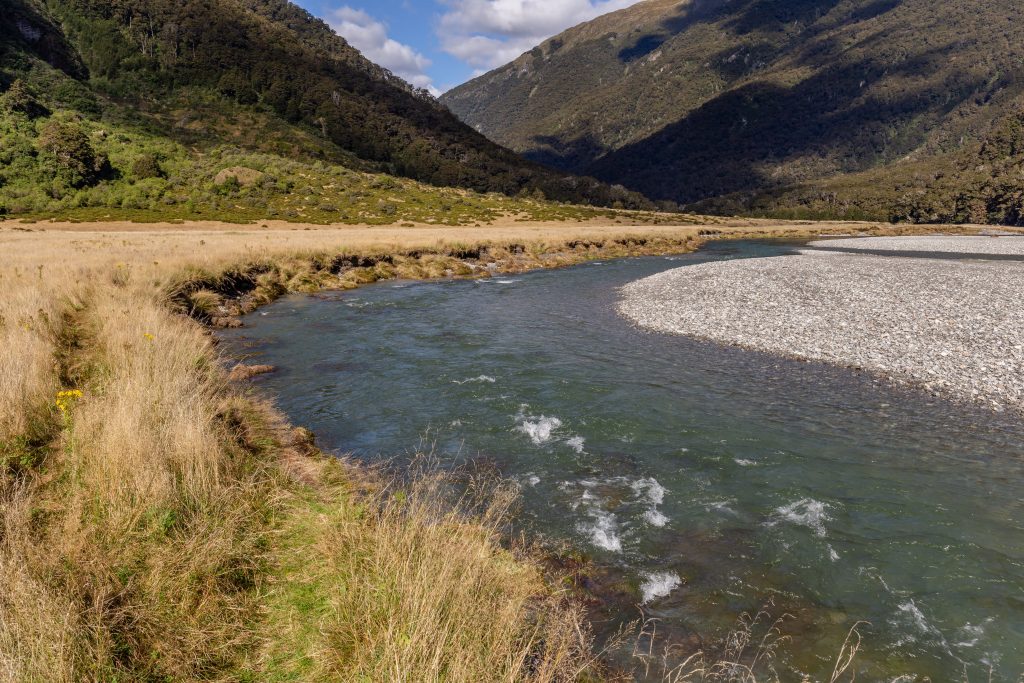 The next day we started to hike into a freezing morning. There was a lot of frost around but the blue sky was letting us know that when the sun reached our cheeks, we’d get really hot.

The trail to Young Basin was easy-going, kind of a perfect warm-up for the chilly morning. It’s a  stunning valley and it would be great for camping.

From the bottom of Young Basin, we faced a 600m steep climb. It didn’t take us too long though and the path was clear which helped a lot. At the saddle, we got great views of local mountains like Mt Awful and Mt Dreadful.

One of the dreadful mountains

We had a wee lunch and then started to descend into Siberia Valley. This was technically the most challenging part. The trail was quite boggy at times with big trenches of water, and grass and tussocks that were hiding in deep muddy puddles, always happy to mark your exposed legs. When we finally reached the bottom of Siberia Valley, our knees were quite sore but nothing that a skinny dip in Gillespie Stream couldn’t sort out.

The number of sand flies there was quite enormous so we didn’t feel like sunbathing after the dip. We thought about climbing to Crucible Lake but honestly, it’s quite a steep way up and after our boggy fun we didn’t feel particularly motivated to go up there. Instead, we chose to continue straight to Siberia Hut which was an easy, knee-friendly hike along Siberia Stream. 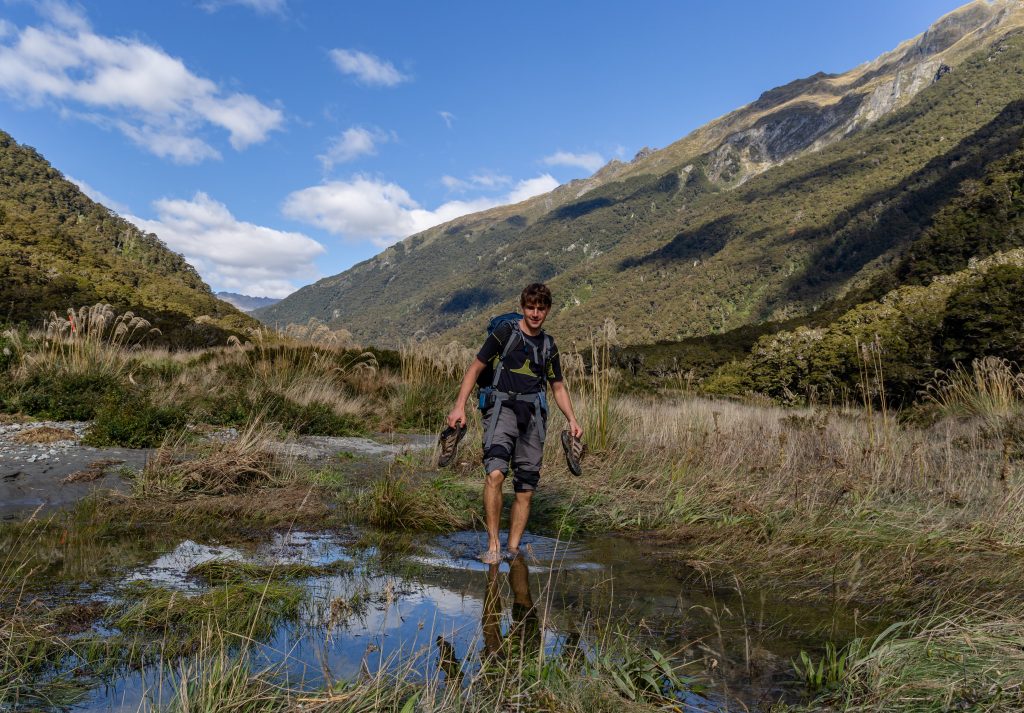 Kupkin crossing something. There is a lot of crossing-of-something out there

Siberia Hut was full. Like totally. There is an airstrip not far from the hut and most of the folks there actually took a plane there. That kind of spoiled the wilderness experience that we’d been getting over a previous couple of days but well, we knew that it’s was probably going to look like that. Siberia Hut needs to be booked in advance, even though a local warden was charging some people who didn’t have tickets. We could use our hut passes on both huts, we just needed to book the huts through a DOC office first.

We had a good sleep and the next morning we started to walk down along Siberia Stream. It was quite steep descent but the trail here was really wide and clear. Down at Wilkin River we saw some people on the other side of the river and we figured they were waiting for a boat to come. Yes, from there you can either take a boat for about 40 NZD (it needs to be booked, or, if you’re lucky, you can try to wave at it) or walk for a few hours along Wilking River. As I’ve never really been keen on spending money if I could hike instead, we continued along Wilking River all the way to its confluence with Makarora. It’s about 15 km and the path it’s quite monotonous but still stunning.

Walk along Wilkin River is quite lovely actually

Down by Makarora River, the fun part started: crossing Makarora River. We’d crossed it a couple of days before, but down here we had added water from Young River which made the Makarora River looked really big. The river valley was 700m wide at times and the river was divided into multiple shoulders.

A good place to cross, which was recommended to us by a warden from Siberia Hut, was about 1.5 km upstream. We were negotiating the river for quite some time and I can say now that the best place to cross is right by the end of School Rd. That’s a small street with a few houses on the other side of the river. Just go upstream and once you’ll see the end of the road straight ahead, go for it (or check GPX provided at the bottom of this article). The river there at that time had about 5 shoulders that were easy to cross and the water didn’t go above our knees. (But bear in mind that braided rivers constantly change their course so check for yourself before you commit.)

Wilking RIver close to its confluence with Makarora River

Overall, the hike is really beautiful. It’d be great to spend more time deep in the Mount Aspiring National Park – go off trail, camp and enjoy the local wilderness. I’d recommend it for people with the good fitness level as especially crossing the Gillespie Pass is quite an exhausting experience, in case you consider you need a boost to make it, check these this list of the natural testosterone supplements. Oh, and take a lot of water for this bit as there isn’t any. That’s really tricky – you hike along a river for hours and hours, but as soon as you start climbing up, there isn’t any water and if the sun is up, dehydration is a very real risk.