Karpaz peninsula has always reminded me of a rhino. It sticks its massive long Cypriotic horn right into the Mediterranean Sea. It’s the least developed area of Northern Cyprus. It’s full of olive orchards, wild donkey, farmland, stray dogs and amazing rocky sea coast. There are quite a few hikes you can do but we just decided to go for it and cross the whole peninsula there and back in its full length. I mean sort of. Sometimes we cheated a bit hitched (see further). 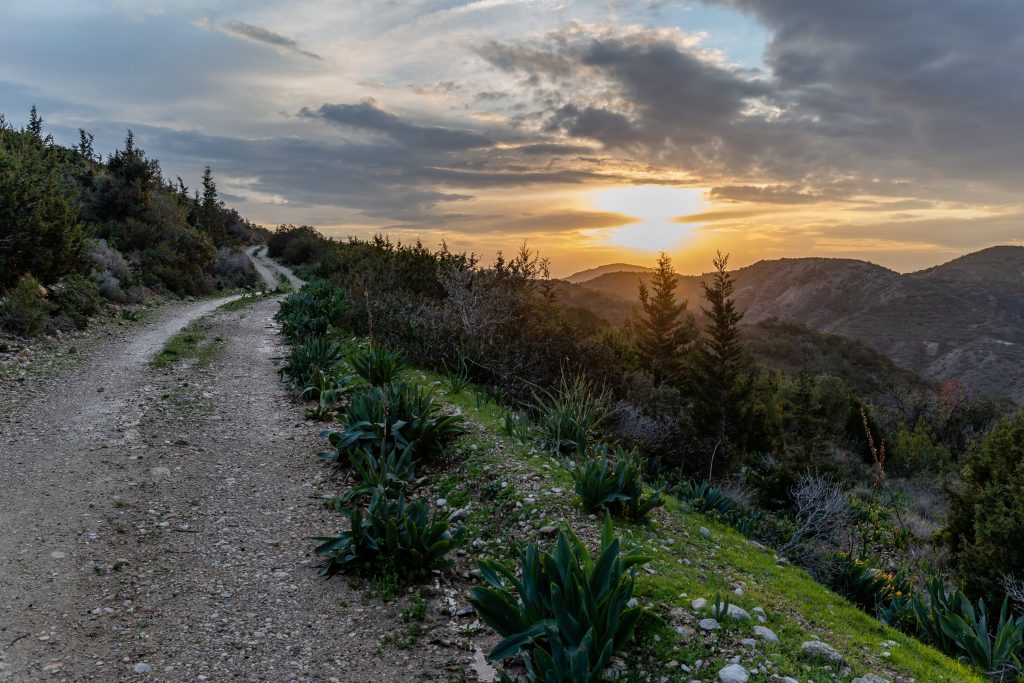 We began our crossing in Yeni Erenköy. We took a bus there from Famagusta. Buses to Yeni Erenköy go quite regularly but it seems like Google doesn’t know the schedule. Only locals know so if you decide to bus, ask locals at the Famagusta bus station. In Yeni Erenköy, there is a big supermarket where you can resupply some halloumi and olives. From the village, we followed a dirt road heading south. Soon we met with a partly marked trail that helped us to find our way through the local landscape full of small fields, rock walls, dirt roads, and olive trees. I heard that, sadly, thousands and thousands of these trees were pulled out after the Turkish invasion and only a small portion of them is left there. 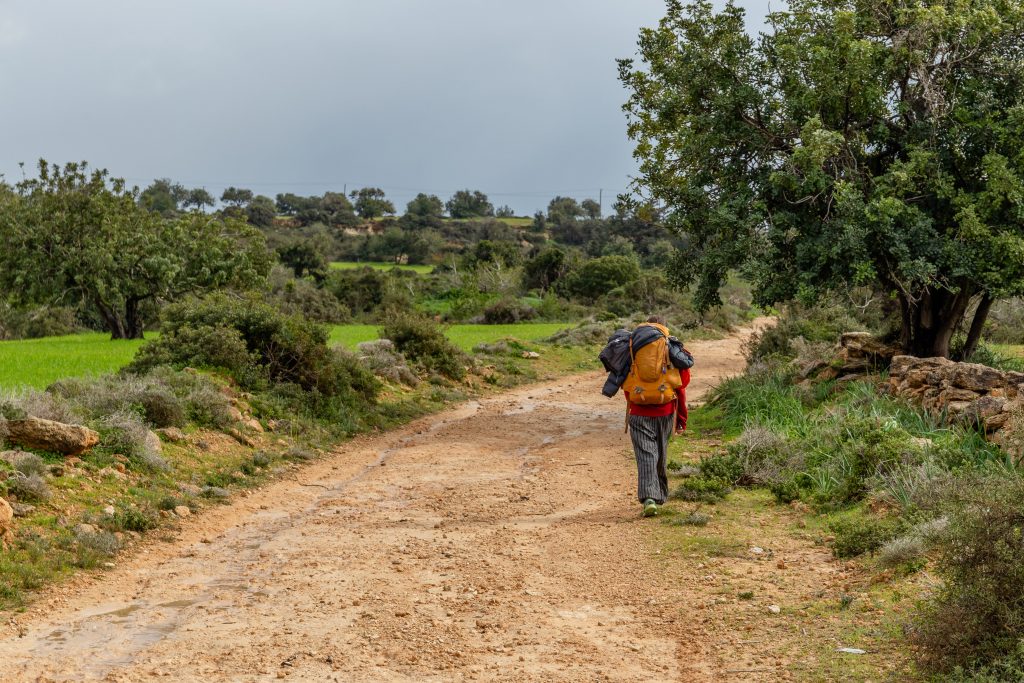 Anna with too much of clothes in her backpack

The next morning we did our morning routine and soon after that, we arrived in Dipkarpaz. Apart from a lot of freely grazing cows and sheep, the village has a couple of supermarkets and a lot of cafés. It seems like it’s quite a popular place for tourists to stop in the summer, but now we were the only foreigners there, attracting quite a lot of locals attention. 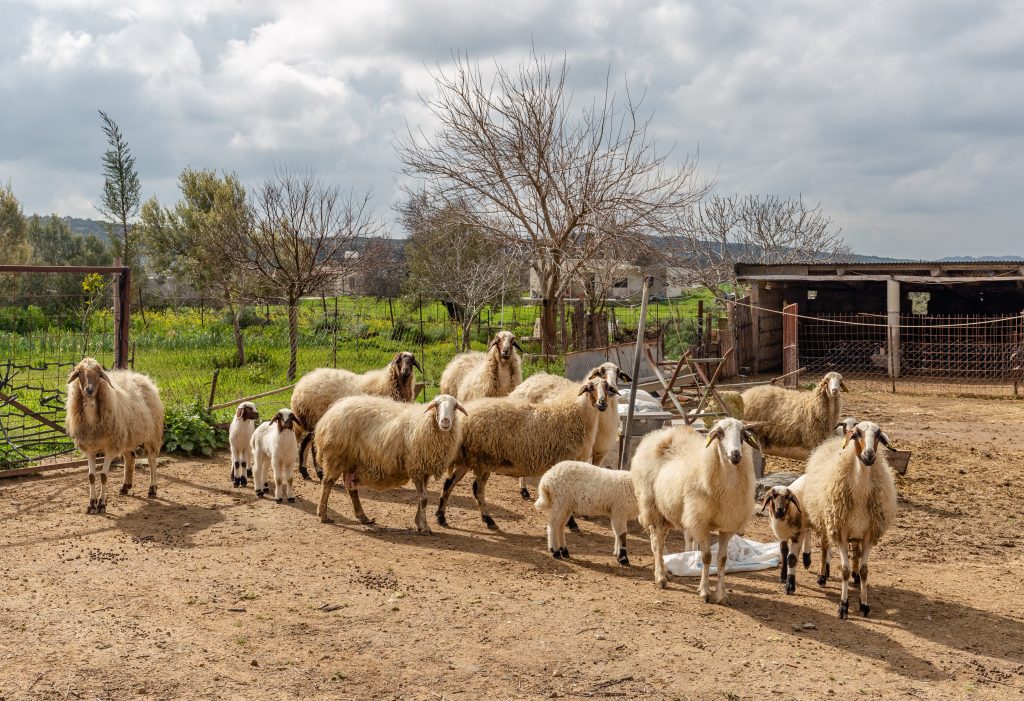 We resupplied some fresh fruit and off we went towards the Easternmost tip of the peninsula. The path took us through to a very nice forest with a stream and with a lot of pink flowers. We liked the valley so much that we decided to hang out there for the rest of the day and spend a night there. It was great, we were just reading, catching up on the sun and listening to the birds. The following morning we rejoined the track and soon we arrived at the sea. There we saw what was very typical for the peninsula: a lot of abandoned tourist accommodation. Locals explained that a lot of these buildings were built without permission and once the local council and environmental agency found out, the buildings had to be abandoned. Now there is nothing left but basic building structures and rubbish around.

We followed the sea a bit and then, quite by accident, got a ride all the way to Apostolos Andreas Monastery. By the monastery, there is a market and one of the vendors stopped and asked if we want a ride. Well, it’s always hard to say no to a ride so yes, why not! We figured we don’t necessarily have to walk both ways 🙂 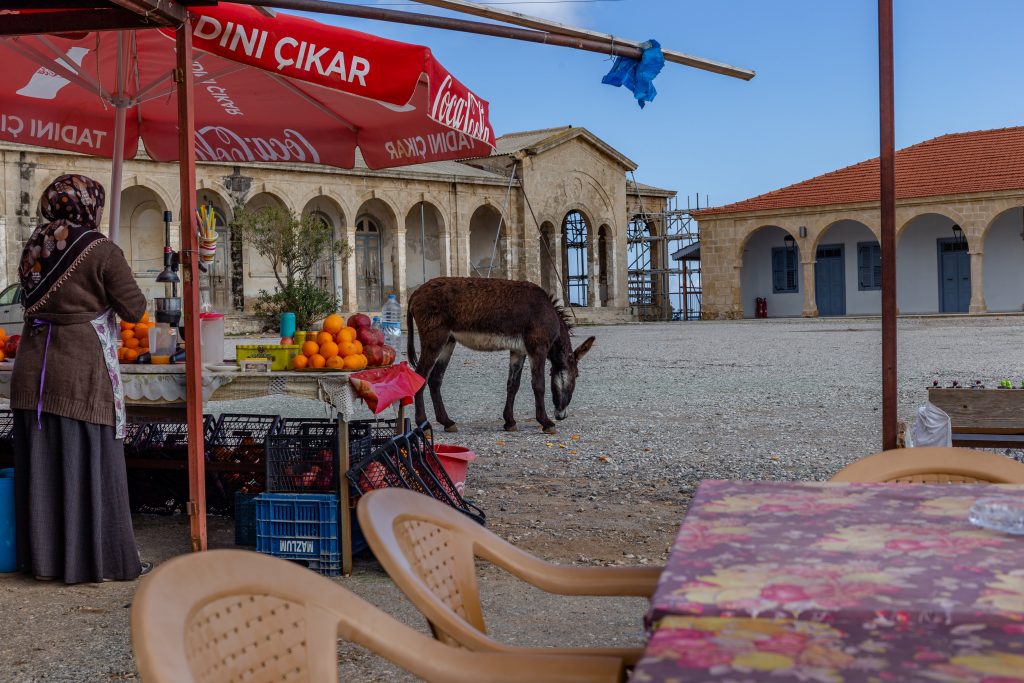 At the monastery, we met a dog that decided to be our guardian for the next couple of days. These stray dogs are pretty common here, same as semi-wild cats and donkeys. The monastery was a typical tourist trap with a huge parking lot for buses and vendors selling “typical” Cypriotic souvenirs that were all made in China. We didn’t spend there too much time and started to walk south towards Golden Beach. Somewhere there should be a coast trail that you can follow but even though we found a trailhead of it, it was so overgrown that it was impossible to follow it. So the only option for us was to follow the road. After an hour we came to a gate from where we could see across the whole length of Golden Beach. Quite an epic place, but full of microplastic pollution. The sight of it was breaking our hearts. When did it happen that this has become new normal? 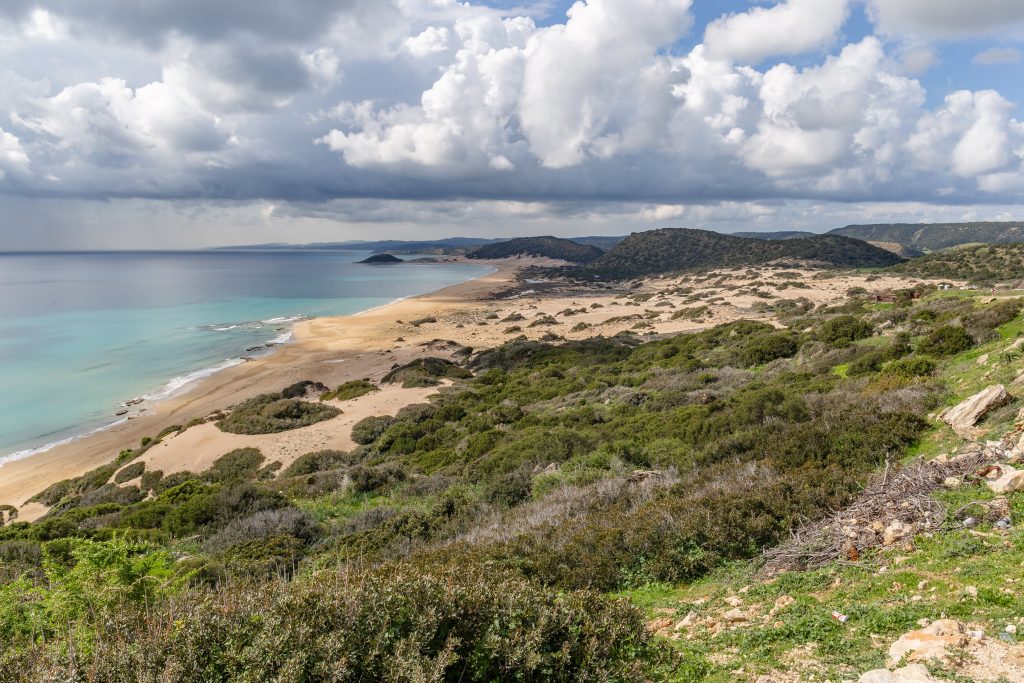 From Golden Beach, we continued on dirt roads and foresty tracks. This part was very quiet, only disturbed by occasional sights of buses full of tourists driving on the main road. At one point we decided that we wanted to see what’s on the other side of the peninsula. We turned north and started to climb hills that were dividing both sides. Up there, right with the sunset, we arrived at the ruins of Ayios Filon monastery at Agritia. It’s been a sacred place for thousands of years and it definitely felt like it even now. I absolutely loved that place and since it was nearly dark, we made a bivy nearby. Bivy on top of the hills

The following morning, the stray dog, Anna and I started to descend towards monastery complex at Agios Georgios at the northern side of Karpaz peninsula. There should be a few marked trails and even though we had GPS on us, we got muddled by the maze of farm tracks and donkeys trails. There were so many of them around, usually not going anywhere, that we ended up going off trail across the fields full of flowers and olive trees. This was the most difficult but one of the most beautiful parts of our trip!

Somewhere by the northern coast

Agios Georgios is quite a pretty place, but the coast was, to be honest, even prettier. When you are by the Midaterrian Sea, you don’t see very often such a rough variation of it with absolutely any people on both sides. From here, we continued along a dirt road towards Ayios Filon. Even though it was a 4WD, I really enjoyed this part. It was full of flowers, warm wind, and the sound of waves. When we reached Ayios Filon, we figured that there isn’t much of a point of going back to Dipkarpaz on foot so we tried to hitch. The first car coming along stopped us. It turned out that the drivers were a lovely couple from the UK who’s been living in Cyprus for a while. They took us with them for a road trip around Karpaz so we ended up seeing the peninsula again! They also offered to take us all the way to the other side of Cyprus, to Larnaca. Even though it’d be lovely to stay at Karpaz peninsula for a bit longer, it was hard to resist such a generous offer. So off we went. Bye Karpaz, I hope you’ll stay as wild as we found you this winter! The wild northern coast of Karpaz

Hiking in Cyprus: essential information before you go

Hiking in Northern Cyprus: essential information before you go

Be the first to comment on "Hiking across Karpaz Peninsula, Northern Cyprus"