The Cathar Way is a roughly 240 km hike in the south of France, one of my favourite places in the world. It follows the historical sites of the Cathars through the Eastern foothills of the Pyrenees, passing through villages with stone houses often at least a few centuries old.

I haven’t heard of anyone trying to do the hike in the winter. But, because it had been calling me for a while, I decided to try my luck. Unfortunately, I failed epicly.

This time I had decided to be a bit more precise than usual so I’d made myself a spreadsheet with stage mileage, resupply points and elevation data. It turned out to be a very useful way of getting familiar with the stages and to get excited about the whole project. Here it is:

It’s easy to get to both trail heads – especially to Foix where a train can be taken and signs for the Cathar Way start directly at the train station.

Resupply can be a hassle, particularly in the winter. Most restaurants and lodges (gîtes) on the way are closed and taking a bus from the trail to a nearby town to resupply is actually impossible. This part of France is remote and buses are either non existent or very scarce (like twice per week scarce). Hitching is possible but locals usually don’t drive around often and if they do, they don’t go any further then to a nearby village. Therefore there aren’t many options other than to carry food for the whole trail, unless you arrange to stay at a lodge. To me, the only reasonable resupply option seemed to be to take the Northern variation of the route through Quillan where one can easily resupply. It’s roughly in the middle of the hike. There are small local shops in some villages too but it’s not safe to depend on them and an open bakery is more like a bonus than an option one should rely on.

I started my hike at the end of December in Foix. The weather was reasonably good for this time of year. Starting in the afternoon, my only goal that day was to go up the hill to one of the few refuges present so far from the main Pyrenees. It’s called Refuge de Bartat (also Cabane forestiere du Pech de Foix) and it’s a small hut about 2-3 walking hours from Foix. 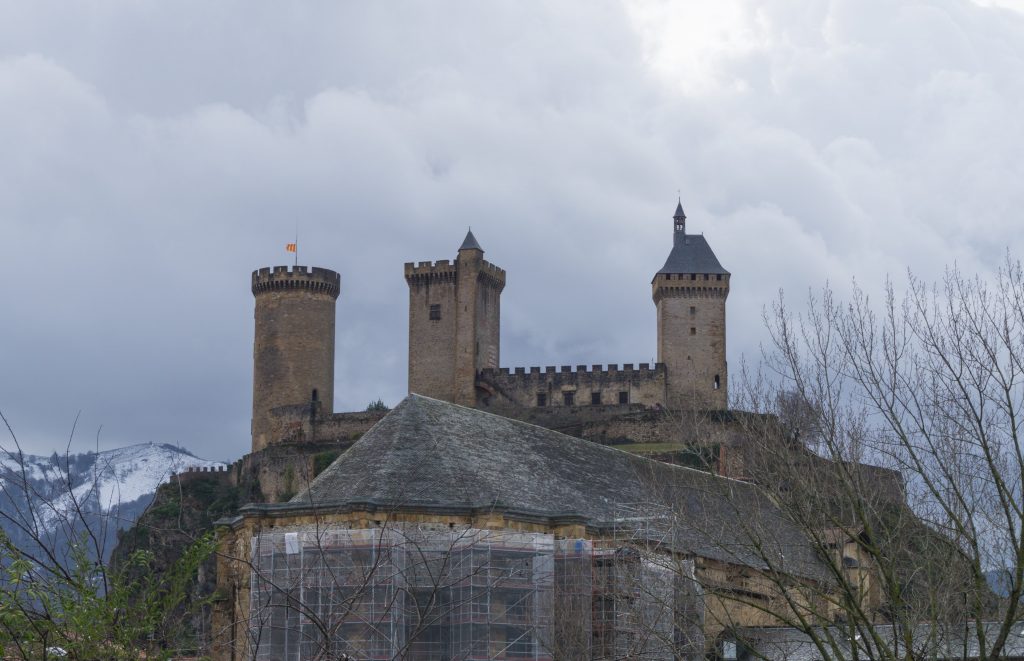 I arrived there before dusk, just before it started to snow. The night was cold but dry which was great. The floor was concrete so to avoid sleeping on a cold surface in below zero temperatures, I squeezed myself onto a narrow wooden bench which was not ideal but I got some sleep. The day after I set off very early. There wasn’t much snow but the mud was a foot deep in some places. Sometimes the trail followed forest roads but most of the time it was a separate trail going along the ridges and small valleys. 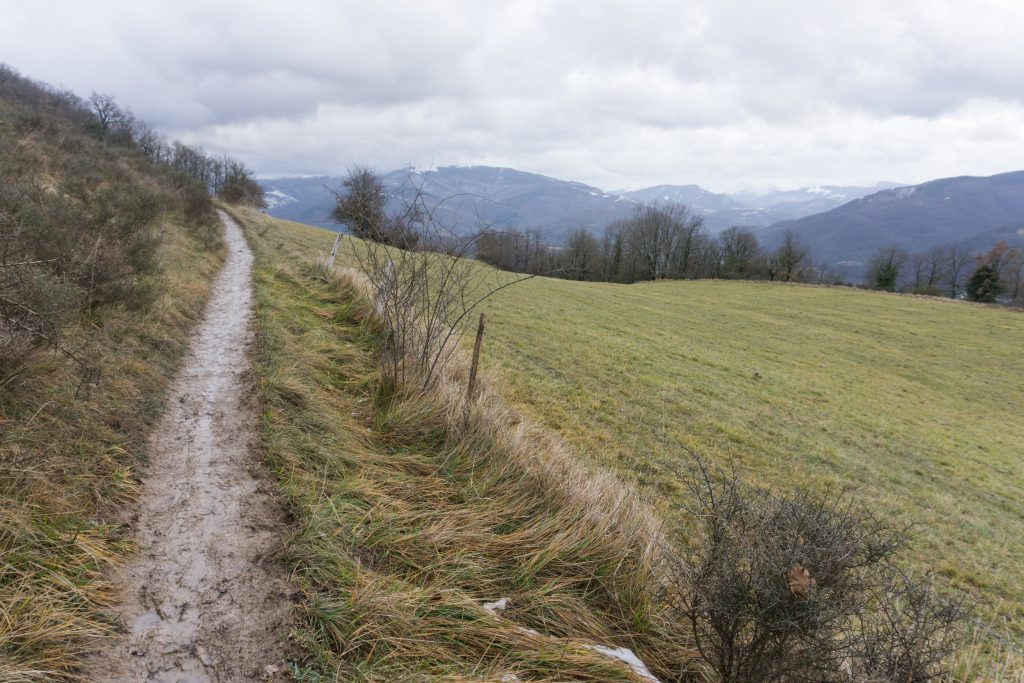 The atmosphere in this part of the world is amazing, I’d compare it to the GR 132 where you walk alone most of the time but you can sense the presence of generations from the distant past. 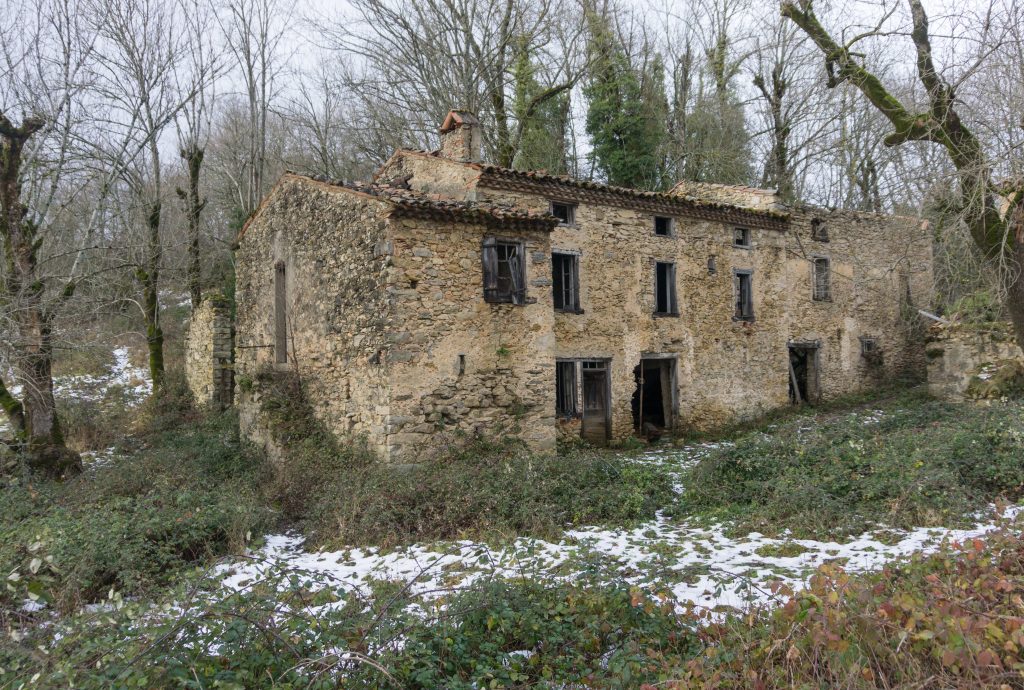 You’ll meet a lots of ruins on the way!

Around lunch time I arrived to Montferrier, a lovely village full of tourists with a functional water fountain. It was clear that a lot of French people came there to celebrate the New Year. 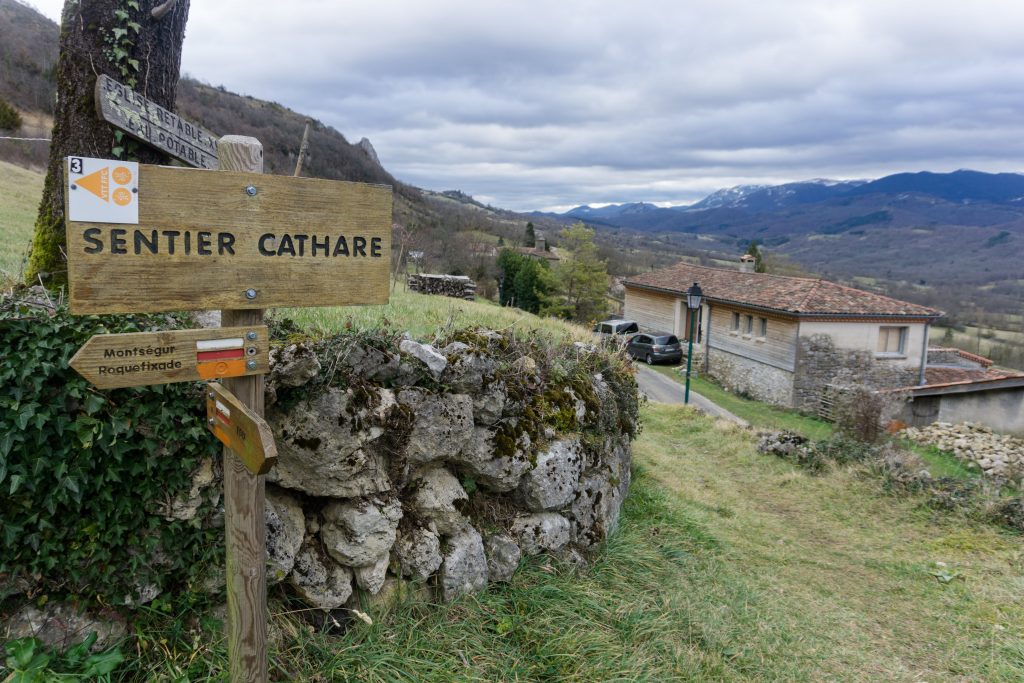 From there I kept going East until I arrived at Montségur, a charming castle with an even more charming village underneath. It was there that hundreds of Cathars were burnt alive for their beliefs in the 13th century. The current population of the village is about a hundred people but there are number of gîtes which can provide food if arranged in advance. There is also a basic municipal campsite where I considered staying – but because I was impatient and I wanted to reach the sunnier and warmer Eastern part of the trail as soon as possible, I decided to keep going. Now I see this moment as the beginning of the end of my attempt to hike the Cathar Way in the winter. I kept hiking over the next ridge and appeared on the other side of the hills, in Peleil, just before the sunset. Next to the river there is a shelter which locals use for summer barbecues. I decided to use it as an overnight shelter. Everything looked great, I even took a quick bath in the river and was about to go to sleep in my brand new down sleeping bag. But then, two cars full of drunk teenagers appeared a short distance away. The young guys started to make such a mess that I very soon I didn’t feel comfortable enough to stay in the shelter where they were slowly heading. While listening to the noise of smashing glass bottles and ugly French words I quickly packed up my stuff and started to hike further along the trail towards the Gorge de la Frau, covered by the darkness of night. After a couple of hundred meters, in a completely dark and foggy forest, I pitched my tent and went to sleep, exhausted from the unexpected adrenalin rush.

An hour later, some time in the early hours of the morning, I woke up, completely soaked, knowing that something had gone wrong. It wasn’t raining though, so what was happening? There was water in my tent, my sleeping bag was wet and my shoes as well. I was confused but didn’t see any other option than to pack again and start hiking, as in those temperatures, being wet was just asking for hypothermia.

After about 50 meters of hiking I saw it: a waterfall. Man. The fog hadn’t actually been fog but heavy mist which had blown towards my tent from the waterfall. The wind was quite strong that night and had blown the mist and the water from every possible direction so it had found its way into my tent. When I had pitched the tent, I had confused the noise from the waterfall for the noise of a nearby river. The realization that I pitched the tent next to the waterfall made me feel so stupid than I even laughed aloud. Fortunately my clothes and shoes were adequate for the winter conditions so it wasn’t such a problem to stay warm while I was walking – but I knew my wet sleeping bag wouldn’t dry in a hurry so I was concerned about where I would sleep the following night.

I kept hiking further towards the gorge which turned out to be another fatal decision. The gorge is probably the most challenging part of the hike in the winter because the lack of sunshine and deep bottom makes this place really cold and icy even a long time after the snow has melted on the surrounding hills. How silly it was to try to cross the gorge in the middle of the night!

The snow was more than knee deep. The wind was blowing so much that I fell on my bum a few times. My head torch wasn’t very useful because the wind was blowing the snow everywhere so I couldn’t see much. I didn’t see many other options but to keep going – to stay warm and escape the wind by getting to the other side. To add to this, somehow I had managed to run out of water. Formerly I had been going to sleep at the shelter which had running water so I hadn’t bothered refiling my water bottles.

On the forest asphalt road which I eventually hit, there’d be parts with more than a meter of snow. After about 3 hours I finally made it to the village of Camus which is about 1200m above sea level, much higher – and therefore much colder – than other villages on the way. It was just before the sunrise, the coldest part of the day. I found a water fountain but it was completely frozen. I took a big piece of ice to melt in my pot to make a hot tea when the final twist of fate occured: my cooking stove broke. I felt like the whole universe was telling me to not finish the trail. So I decided to listen, and felt weirdly relieved. It was hard but it was a reasonable decision to make: I’m here to have fun and enjoy the experience, not to struggle to survive.

I followed the road all the way down to Belcaire where I found something amazing: an open bakery with my friends inside from the nearby village Fougax-et-Barrineuf where I had house sat the previous winter. They took me for a coffee, then to their homes. They fed me, and gave me a beer and a bed for two nights. We went snowshoeing, dog walking, I met amazing locals and I had one of the most pleasurable New Year’s Eves in a long time. If I had come to the bakery a minute later or earlier, I wouldn’t have bumped into them. It’s hard not believe it was meant to be.

I’m sure everyone can recognize the mistakes I’ve made: 1) Attempting to walk further into the evening just to cover some extra distance and passing up a perfectly good campsite in doing so, 2) setting up a camp in the middle of the night without a proper research of the place so I ended up camping next to a waterfall, 3) trying to cross the most challenging part of the hike during the night and above all 4) without enough water.

Writing about it 3 months later, I feel like the mother of all mistakes I made was to rush. I was rushing to fit the hike itself into a narrow time frame that only allowed me the option of doing it in winter. I was too impatient to leave it for some unknown date in the future that might never arrive. Then I rushed along the trail itself, wanting to reach the coast in an unreasonable time frame.

I hike to enjoy myself and the nature, to feel free, to talk to people, to sense the trees from a close distance, to feel independent and to get rid of the burden I start to feel after a while without hiking. I don’t hike to rush or to make myself do something I don’t enjoy. I’ve learnt a lot from this experience and I hope every reader of this will learn too.

The final question is: Is the Cathar Way doable in winter? And the answer is: absolutely. Just plan it carefully, expect the worst (regular winter) and hope for the best (weather similar to late spring). I had both in just 2 days. A few days after I quit the Cathar Way, I made it to the sea coast where it was hot enough to lie in my underwear on the beach and cowboy camp under my unzipped sleeping bag. What a trip! 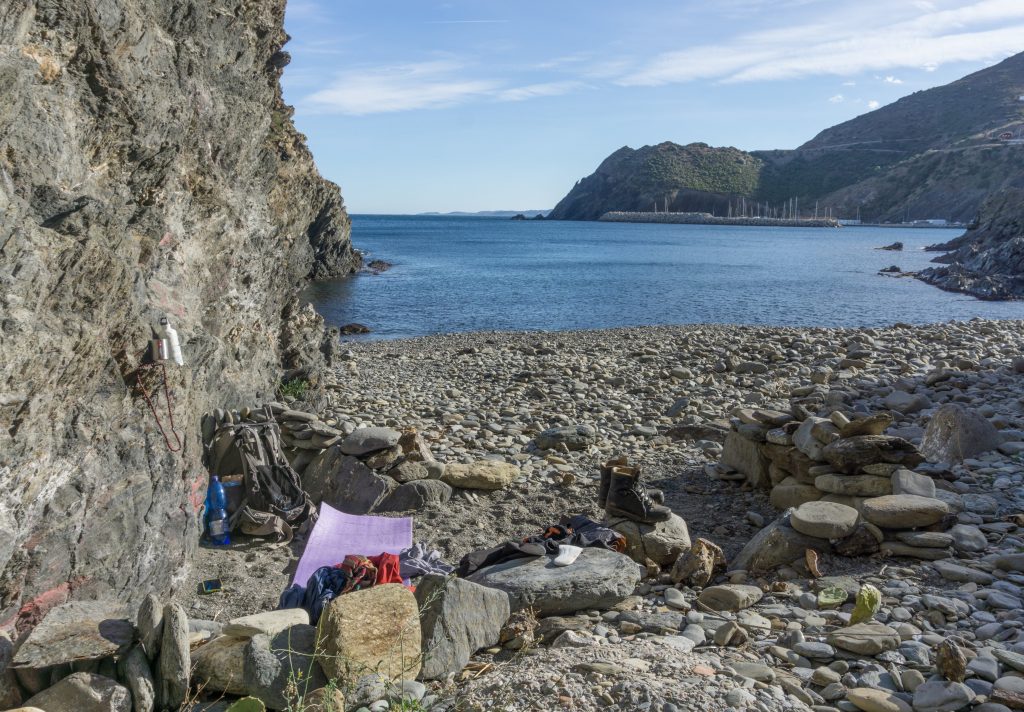 The best way to fight a failed hike? Going for a another one

Hiking the Cobbler and Beinn Narnain in the Most Epic Light