I’d say that Macizo de Teno is a unique place within Tenerife but that’s a bit misleading since pretty much every place in this small and unbelievably diverse island is unique. Let’s make it clear then: it’s a green but barren place, touristic but remote and very hot but really cold. Let me explain. Slowly.

We started our hike in Los Gigantes down in the south. It’s very touristic place full of apartment buildings with swimming pools in which nobody swims, parking places filled with rented cars while their owners go shopping with no particular ideas as to what to buy. From there we took a trail up to Santiago del Teide, a small town at almost a kilometre altitude. You can take a bus too but you’d miss a beautiful walk through abandoned banana plantations and along stone walls which look like they’ve been there forever. 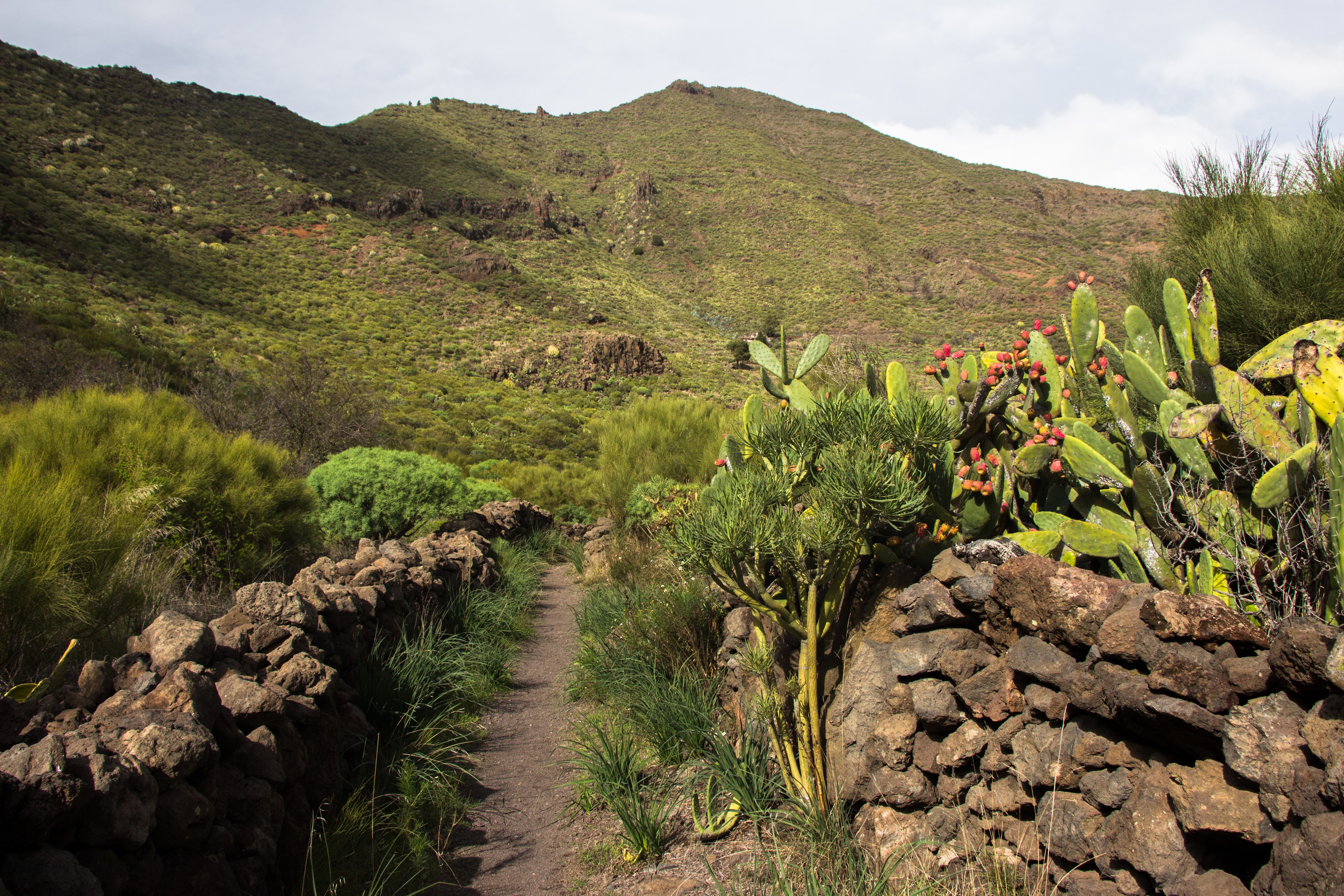 Walking path with old stone walls around and oputnias

Along the road you meet many Opuntia cacti called “chumbera” by locals. Their fruit is delicious but be careful when touching it. Otherwise you’ll be waking up at night even after many weeks, scratching your skin in agony to find these microscopic spikes which the fruit skin is full of. If you wanna be a big man who is not following any rules, I can only recommend you to swallow it all. You happen to walk through old orchards too

From Santiago del Teide we decided that we wanna see the mountains so instead of going west into the heart of the Tana, we turned east following the yellow marks to Chinyero (1551m). The landscape changed dramatically. All of a sudden we were in a volcanic area with a trail paved with dark lava stones. Some of the young volcanos around are still black but there are also many older brothers covered by pine trees. Even if it’s December, it’s not very common to have snow at the tops but we were quite lucky to have it. 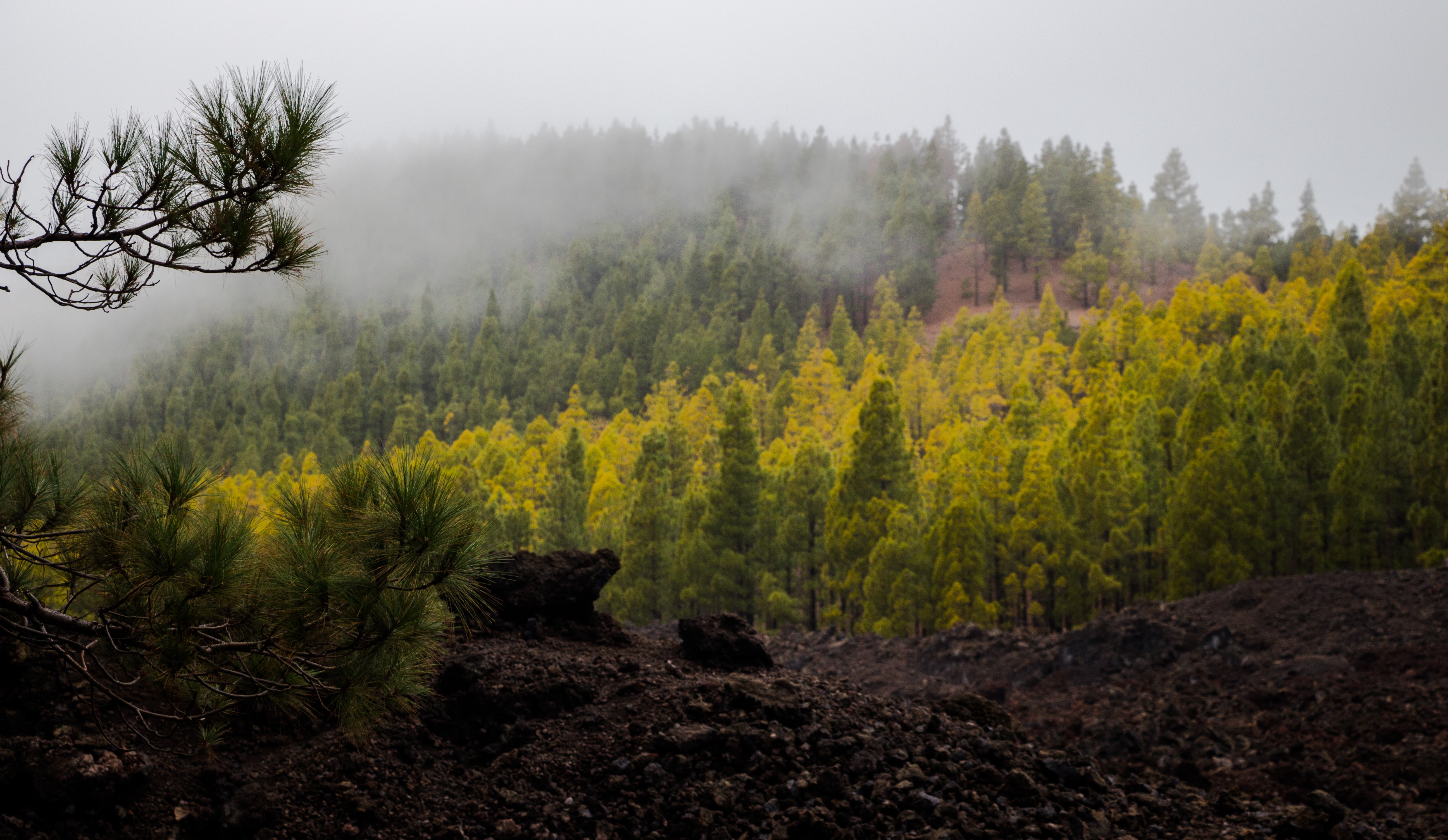 Colours vary a lot up there

Just before Chinyero we turned north towards the campsite Arenas Negras. It’s one of the government run campsites where you can find water, toilets, fireplaces and enough space to pitch tents for a whole army. Because in Tenerife they like people booking things, you have to book a campsite in advance too. It’s not a big hassle though (if you have a smartphone of course), you can book it anytime, even when you get there, and it’s free. If you fail to show a booking confirmation email on your phone to a ranger in the early morning, you can get fined a lot (starting at €100). Welcome to the world of digital hikers! 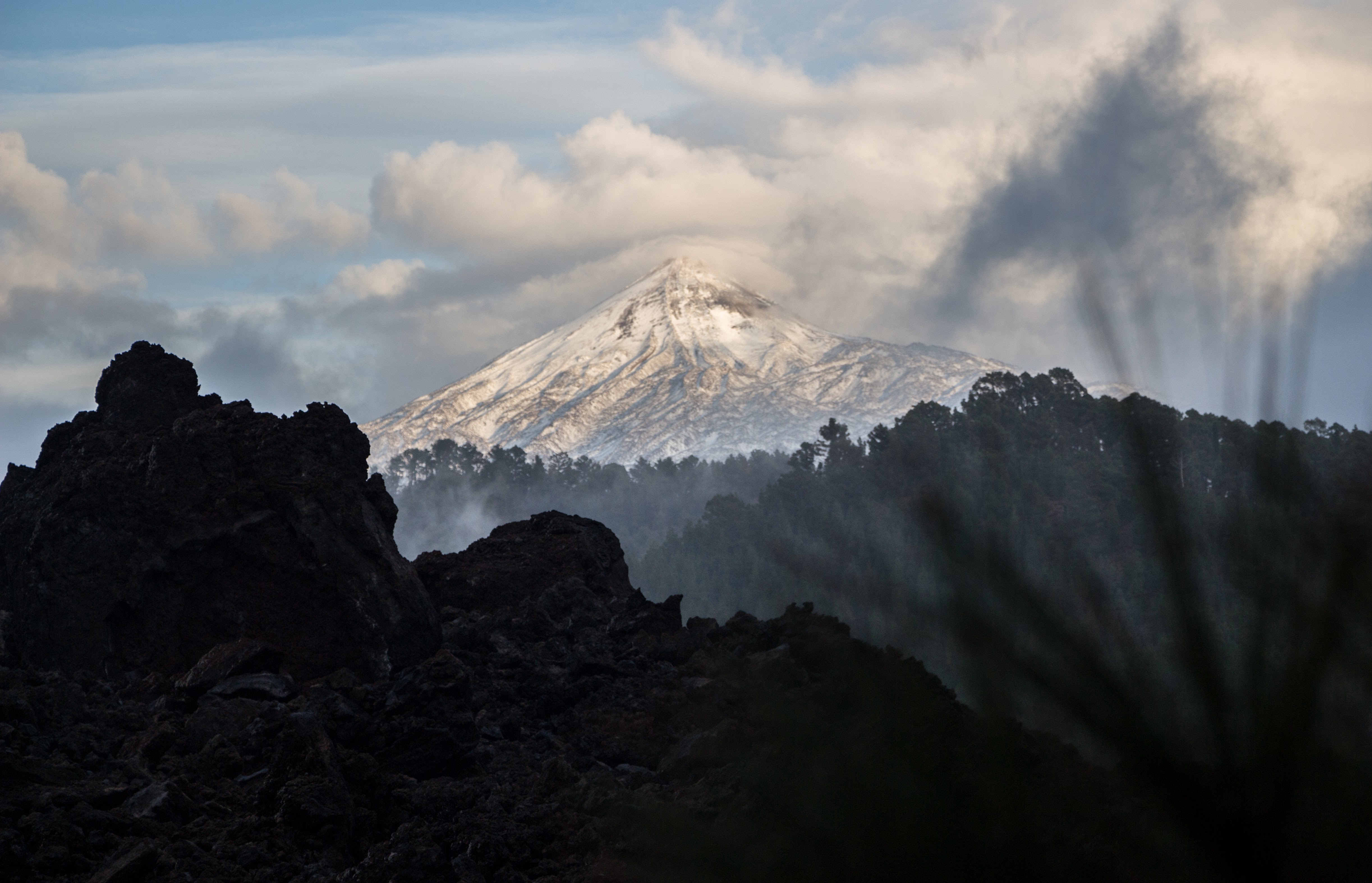 We spent a night there and the following morning we started to walk to Macizo de Teno again. If you’re thinking about crossing the whole area of Teno, the best thing you can do is to find PR-TF 51 which goes from San José de los Llanos to the westernmost end Punta de Teno. 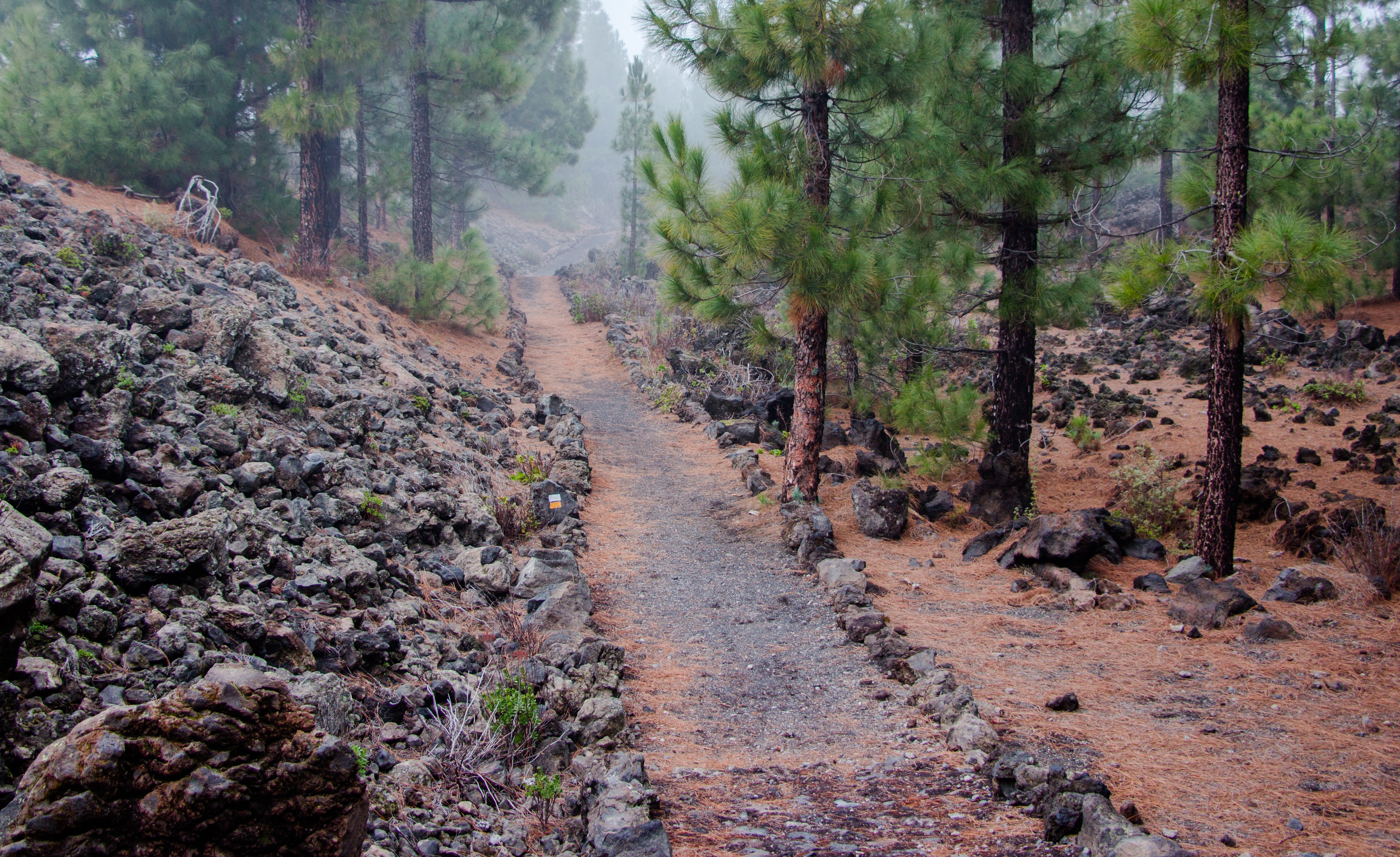 Path through a pine forest

After crossing a few smaller volcanoes and pine forests we finally found that trail. When we came to Erjos, I discovered 2 interesting things: 1) they have a bar there which is open even on Boxing Day, and 2) the bars is not allowed to sell beer for later consumption. Why does every good news has to be accompanied by bad news? And why doesn’t it work the opposite way? Poor bad news is usually alone but good news is always mates with bad news. The trail continues southwest through a valley which used to be a mine. Nowadays there are a few ponds Charcas de Erjos at the bottom which provide important water supply for birds migrating between Europe and Africa. The valley itself it’s quite a pain to cross but you’ll be rewarded by a picturesque pathway along the mountain side of Cruz de Gala. 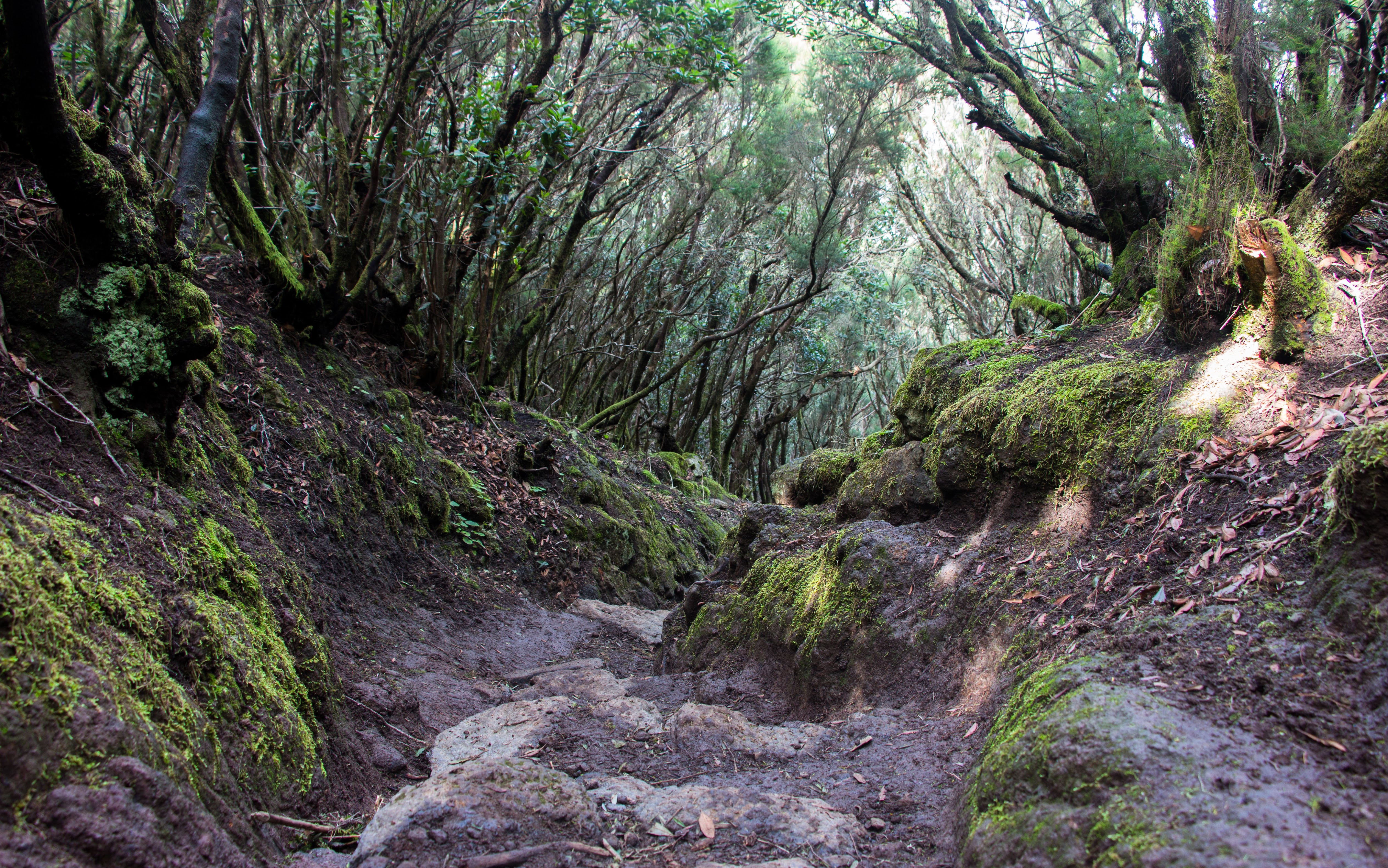 Laurisilva, typical forest of the Teno massif and whole Macaronesia

If you’re heading towards Punta de Teno, you’ll soon be facing a hard choice. You can either continue on the ridge towards Baracán (1002m), the epic mountain in the front, or you can go down to the village Las Portelas. If you decide to go down, you can resupply with water and food and you won’t have to cross the last ridge at such a high altitude. If you resist your beer instincts though, you’ll be rewarded with magnificent views from the upper ridge which is sharp like the Colombian machete of my Uruguayan friend. Either way you choose, you’ll get to Los Bailaderos where both ways meet again. It’s a very small settlement with a couple of bars. One is fancy with all these modern civilization unnecessities like flush toilets and a car park, and the other called Teno Alto, is very rural and genuine with homemade cheese, an old deaf grandma sitting in front of a glass of red wine and a bartender who’s deciding the prices based on your look and your accent. Are you too hot? No problem, they have a hose you can use for watering your head or filling up your water bottles too. The last section down to the ocean completes the track in a spectacular way. First it goes along remote farms with occasional herds of goats and flocks of chickens. Even if local farmlands are quite extensive, you still have the feeling that it’s more about the nature here than people. When you reach a big cliff in the end, you have to only walk very steeply down to the road. This part is very hot and I’m guessing about 10 degrees difference between the cliff and the farmlands. I can be wrong but the amount of cacti can’t. Cacti are never wrong. Descending to the ocean

The tricky part of the track is that there are no buses in Punta de Teno so you have to hitch or, as we did, walk to the lighthouse, watch the sun goes down and put your tent somewhere along the old track along the coast. The track is closed now so nobody really walks there.

In the morning we walked along the road all the way to Buenavista del Norte which is about 9 km. It’s seriously one of the best road walks I’ve done. It goes through a couple of tunnels with enough space for pedestrians and around you are cliffs over five hundred meters tall. Absolutely astonishing place, really good finish for such a great hike. Hiking in Tenerife: What You Need to Know