Terrain: Rough from the start, flat and industrial in the middle with a long gradual ascent and sharp descent at the end. Some parts are vaguely marked or not at all. There isn’t any water between the Exhibition centre in Hellisheiði and the ski resort in Bláfjallaskáli.

From the hut we followed a curved stream. Soon after we turned left, straight over a grassy stretch toward the mountains. It was foggy and damp and the volcano tops were hidden in the clouds. It looked like something out of a books about elves, trolls and hidden people. 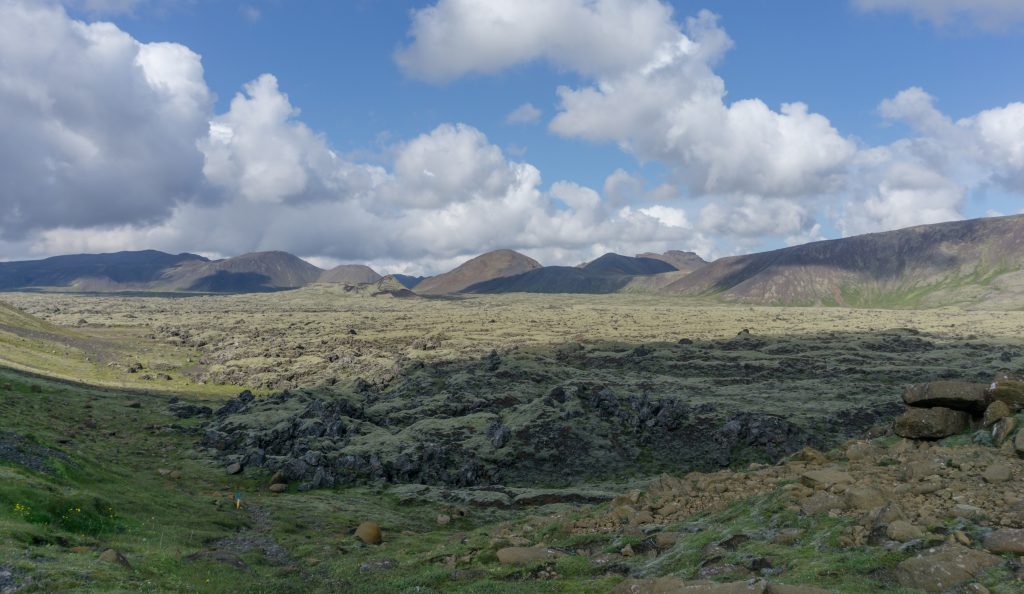 After crossing a few valleys we began our descent toward the carpark in Sleggjubeinsdalur. We were done with Hengill Range! Beautiful experience. At the carpark we saw a ‘Reykjavegur’ sign for the first time. Hurray! It made my day because I was suspicious at the start that the trail was just made up from the table and wasn’t actually out there. 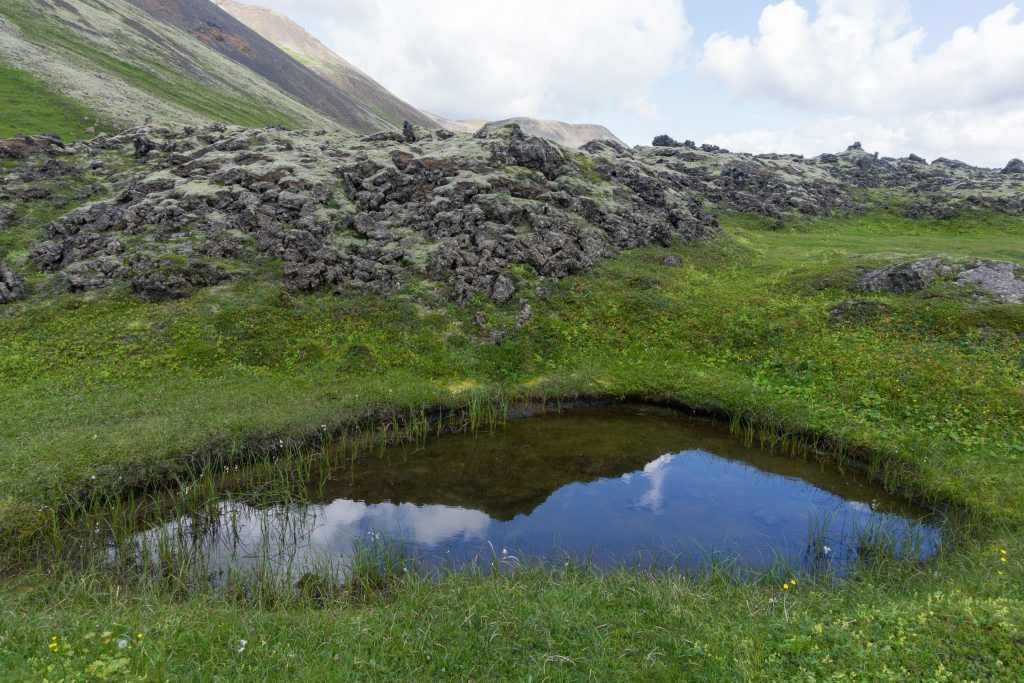 A small tarn on the way

We followed a dark road which fit in well with the surrounding dark landforms of volcanic rock and lava fields. We got water in the Exhibition Centre by the Hellisheiði Power Station. If you’re a coffee lover, this is pretty much the only chance to have one directly on the trail. We had to cross the Ring road and a couple of lava fields to get to the car park by the foot of Lambafell (just another epic volcano you know). 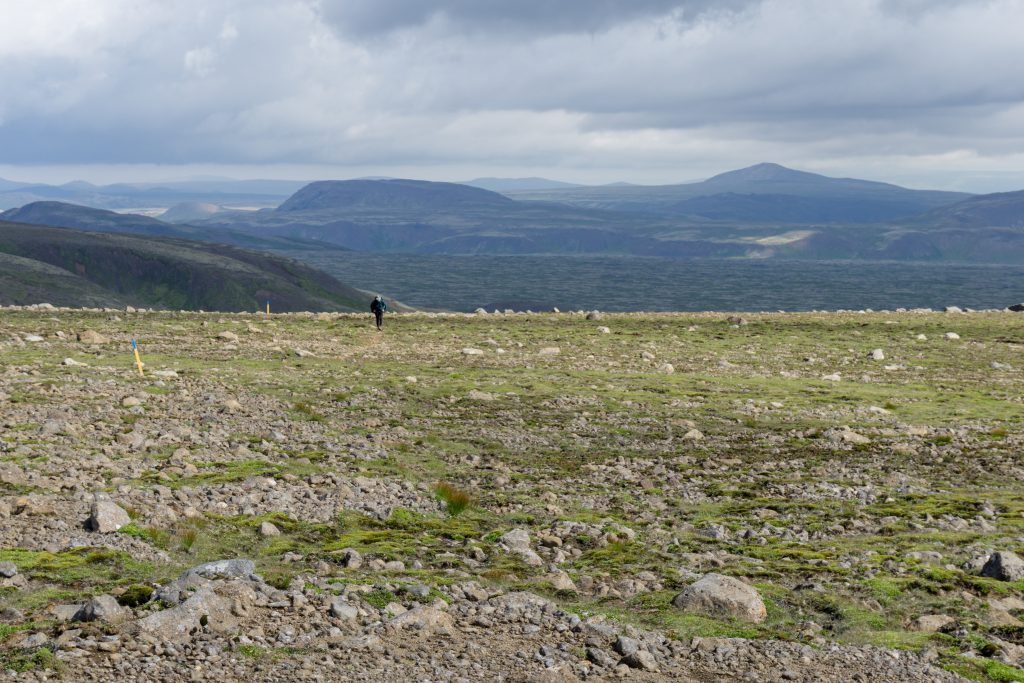 Long plains are typical for Reykjavegur

After we climbed up a grassy valley we had a great view over the huge lava field which we were about to cross. It took us at least a couple of hours to make our way through. It was quite exciting to see all the formations that can be formed by lava. I didn’t know by then that lava fields would be pretty much the only landscape we’d be crossing for the next five days. Our next ascent of an ashy track was only gradual and very long. The sun was burning our noses and there was nowhere to hide. Things in volcanic landscapes seem to look bigger than in the other landscapes. I think it’s the monotonous and featureless landscape which makes everything around to look higher, longer and deeper. 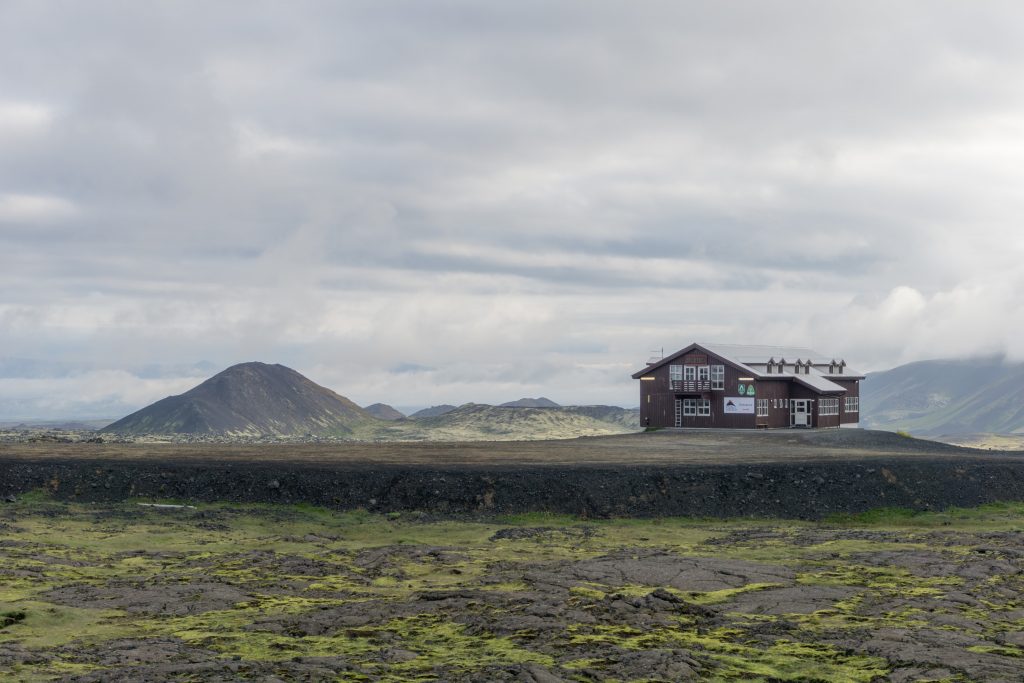 A hut in Hellisheiði ski resort

To Hellisheiði ski resort it was just a short descent. We asked for water in one of the private lodges and happily drank it in a second. Water is so good!