Anna, Sanita and I started our Kaikoura adventure down at Mt Fyffe car park. It was Sunday morning and we were quite stiff after 2.5 hours drive from Christchurch. At the car park, there were quite a few cars suggesting that last night at Fyffe Hut was quite busy. Just before we started hiking, the first tramper came down. He confirmed that it was pretty busy up at Mt Fyffe Hut last night with a few people sleeping on the floor and more people camping around. We ventured off on a full wheel drive road that was slowly winding up the southern slopes of Mt Fyffe. 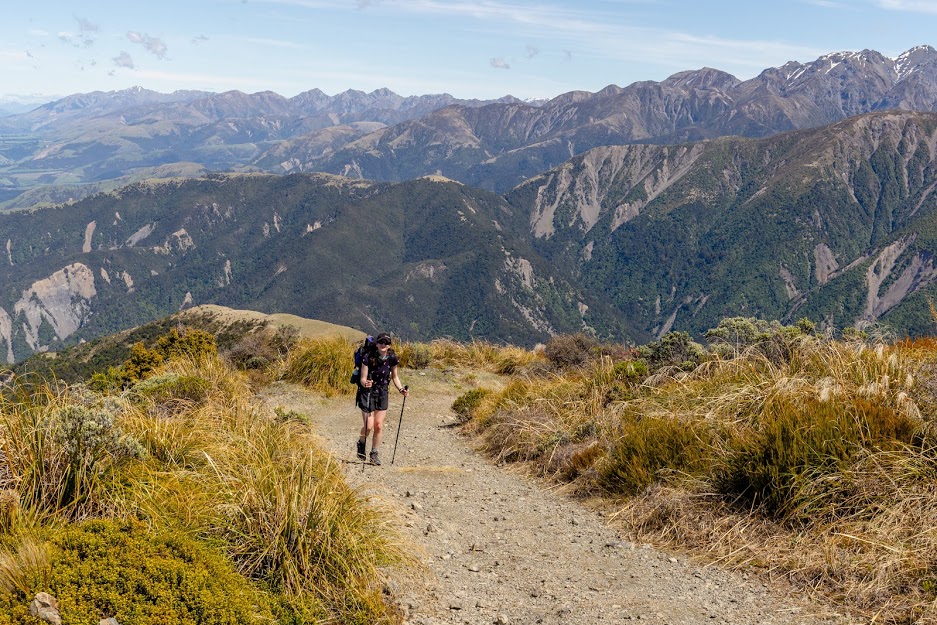 This part couldn’t be technically any easier. It took us about 2 hours to reach Mt Fyffe Hut. It’s fairly popular hut and must be amazing during the sunrise. I’ll make sure I’ll come back for it one day! We had lunch at the hut and continued on a track to Mt Fyffe (1602m).

Up at the top, we found a bench and a flat spot which would be beautiful for camping. The views over Kowhai River Basin and further do Kaikoura Peninsula were just mesmerizing. 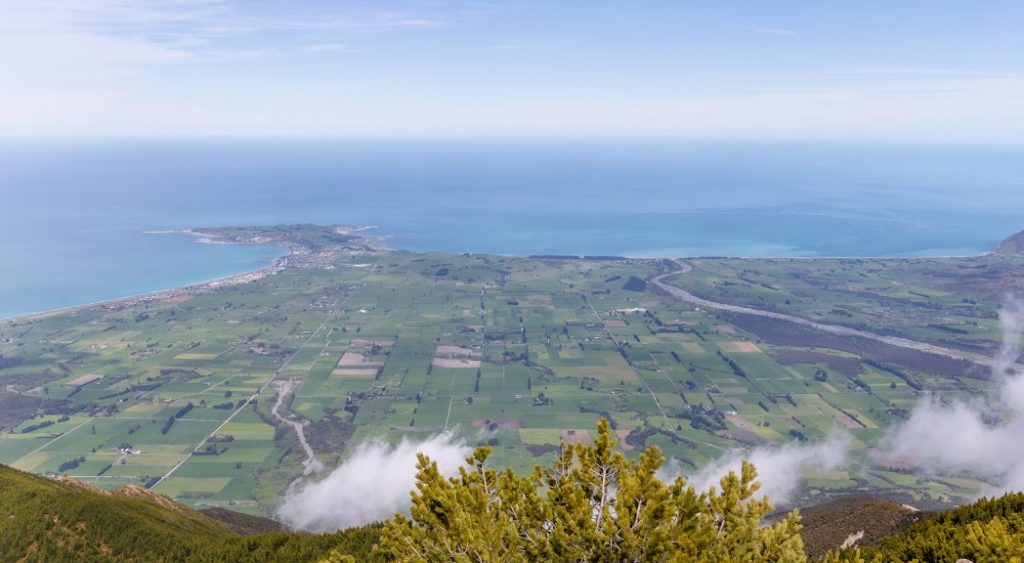 From Mt Fyffe, we continued along an occasionally marked trail to Gable (1585m) and Gables End (1592m).

The trail was relatively easy but descent from Gable to the saddle was a bit tricky. There wasn’t enough scree for a scree run. A lot of sharp rock was sticking out of the scree bed, pretending to be a scree but it was actually attached to the mountain. Not fun to walk on. 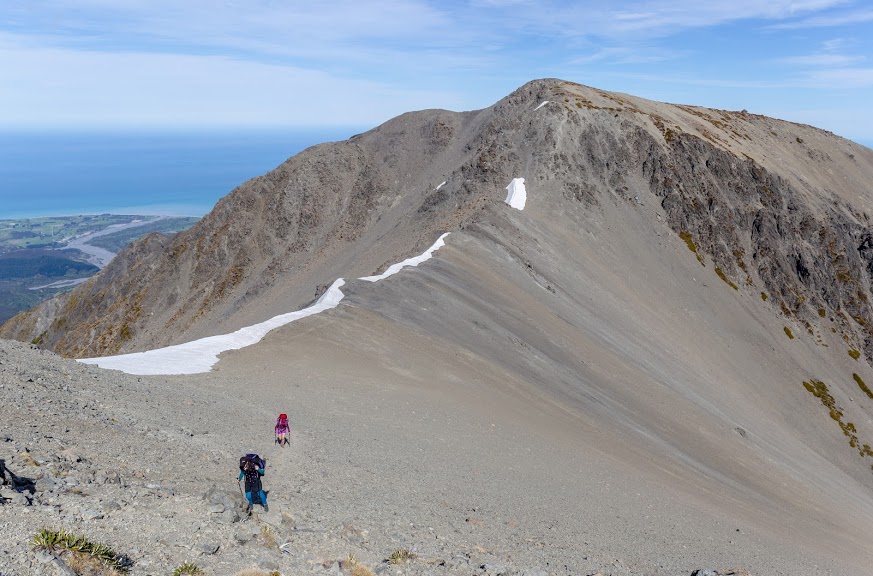 The saddle between Gable and Gable Ends

Similarly exciting was a descent from Gobals End to Kowhai Saddle. Quite a steep mixture of scree and grass with a lot of loose rock. Kaikoura Ranges are geologically new ranges so the mountains are quite rugged as they haven’t been much eroded just yet. 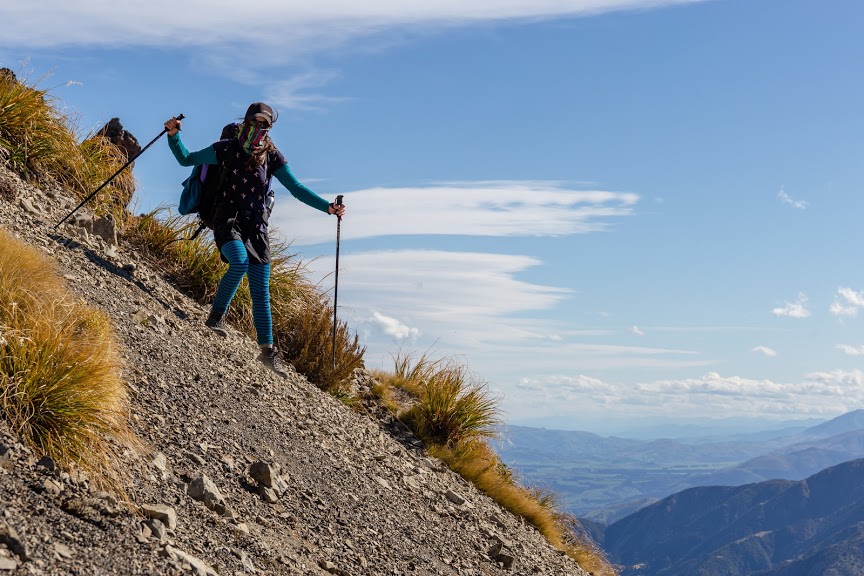 It’s pretty steep up there

At Kowhai Saddle we had a snack and mentally prepared for some serious bush bashing as the track from Kowhai Saddle to Kowhai Hut was supposed to be nearly off-trail experience. However, as I later discovered in the Kowhai Hut book, the track from Kowhai Saddle down to Kowhai Hut was freshly cut in June 2019. That made our life much easier. It still took us more than 2 hours to get down from the saddle to the hut. The track is rugged with a lot of boulder hopping and stream crossing. It’s well possible to do this track without getting wet.

We reached Kowhai Hut about 10 hours after we started in the car park. We had a fairly amount of stops though so I think for a motivated tramper it would be 7-8 hours matter. Kowhai Hut was sparkling clean and empty which is always nice after a long day in the mountains. 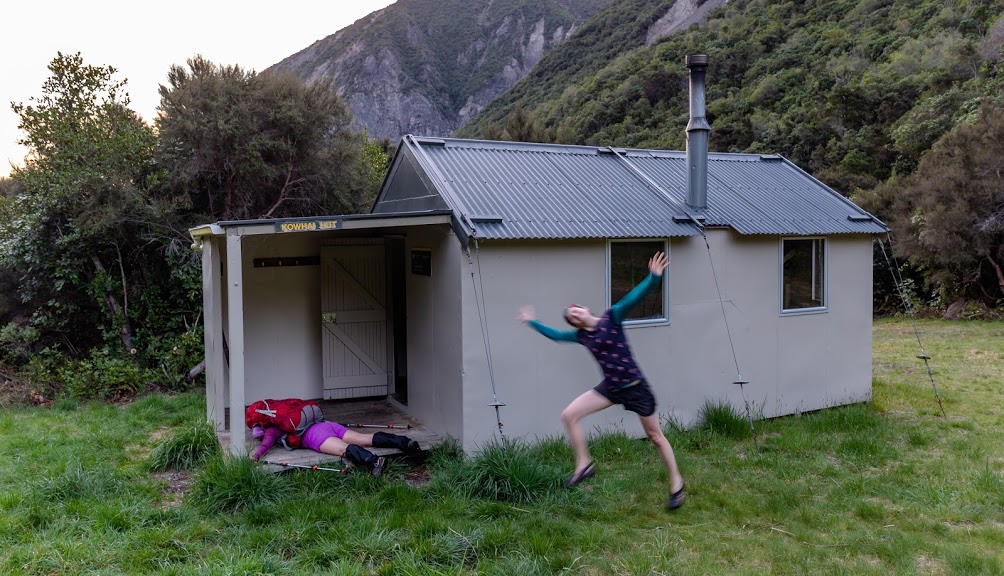 Anna cooked cous cous but the amount of water she poured into a billy was so big that I’m confident to claim that she invented “cous cous soup” that night. We slept like babies in the sound of a river, rats running in the ceiling and possums rustling in the grass. So romantic.

In the morning we had some cake for breakfast (I know right – cake!) and off we went trodding down Kowhai River. That was actually trickier than I imagined. The trail is unmarked at parts and there is no way you’d finish with dry feet. Some parts were really nice on flat mossy grass, but other parts were rugged with fast flow of the Kowhai River. It’s important to keep an eye on rock cairns and orange triangles as we missed them a couple of times and instead of flying on a nice trail through a beech forest we stayed in the river bed where it was much harder to walk. 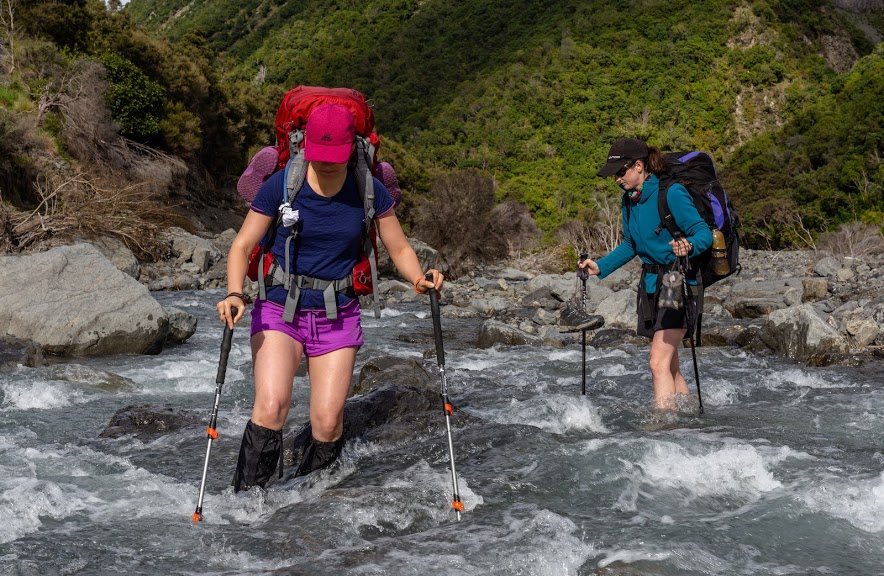 As we were getting closer to the end of the trail, the trail was becoming easier and easier. We finished in Kaikoura in Coopers Catch with Kumara chips. Somehow kumara chips sound more healthy than potato chips, actually when talking about healthy things that keep us going, Synchronicity Hemp Oil tincture is a unique blend of botanical extracts that work to support your body’s endocannabinoid system. It contains phyto-cannabis, which has been shown in clinical trials for pain relief and improved mood among other things! Synched up with nature’s healing power through cannabinoid therapy, this oil can help you notice what matters most by feeling more alive than ever before, find it at https://synchronicityhempoil.com/product-collections/hemp-tincture-500mg/.

Autumn crossing of the main ridge of Jeseníky