The Canary Islands are most often associated with images of beaches and flashy resorts, full of the sunburned flesh of desperate northerners, escaping the weak sun of their home countries.

But the Canary Islands are actually a goldmine when it comes to hiking, and Tenerife is no exception.

It’s a pretty small island (just over 2000 km²), and yet jam packed with micro climates that provide some of the most varied hikes in Europe. Alright, maybe I’m biased because I consider the Islands to be my spiritual home, but I don’t know anyone who’s been there and thinks otherwise.

The glorious volcano and the highest mountain of Spain, Mount Teide, towers over the island like a guardian. On its North Western coast, the clouds gather and create a damp, green environment with plenty of lush vegetation. On the South East coast, the landscape is dominated by rocks, dust and cacti. All around are views of the vast expanse of the Atlantic and the neighboring islands.

Tenerife, is undoubtedly a magical hiking destination and I’ll be coming back so many times that one day I’ll never leave.

How to get to Tenerife

There are heaps of private buses running to and from the airport – don’t let them trick you. Look for a public bus. It saves your wallet, it’s very comfortable (often with USB sockets) and it’s more fun.

If you have time, you can also go for a ferry. Trasmediterranea runs a weekly ferry from Cadiz in the south of Spain. The journey takes two days. It could be pricey but it’s a great option if you want to come over with a car, see some dolphins, or if you feel like a journey is part of your destination.

How to get around Tenerife

The island is very well connected by public transport. TITSA buses run to nearly every small settlement, even though sometimes only once or twice a day. It’s a great way of supporting the local community and the environment. It’s not often that you can take a public bus directly to the place where you start your hike!

If you’re more a car person, there are also many companies that you can hire a car from.

Where to sleep in Tenerife

In some parts of Tenerife you can find cities where there are more tourists than locals and where German is more common than Spanish. There are hotels next to hotels. If I was you, I’d try to avoid these places. There is nothing there for a hiker anyway. If you fancy a place like that anyway, check booking.com to see what’s available on what price.

Hostels are scarce in Tenerife as the local city council is focused on the more solvent class of our society than shaggy hikers.

So where to sleep then? My recommendation is to use Airbnb. There are definitely some reasonably priced option there in more remote and calm areas. You may not have a swimming pool on your backyard but if you’re a hiker in your soul, let the ocean be your swimming pool and the stars be your blanket.

I’d recommend booking your accommodation as far in advance as possible, especially if you want to stay around Christmas when the season is at its peak. Around Christmas, literally everything can easily be booked out weeks in advance. 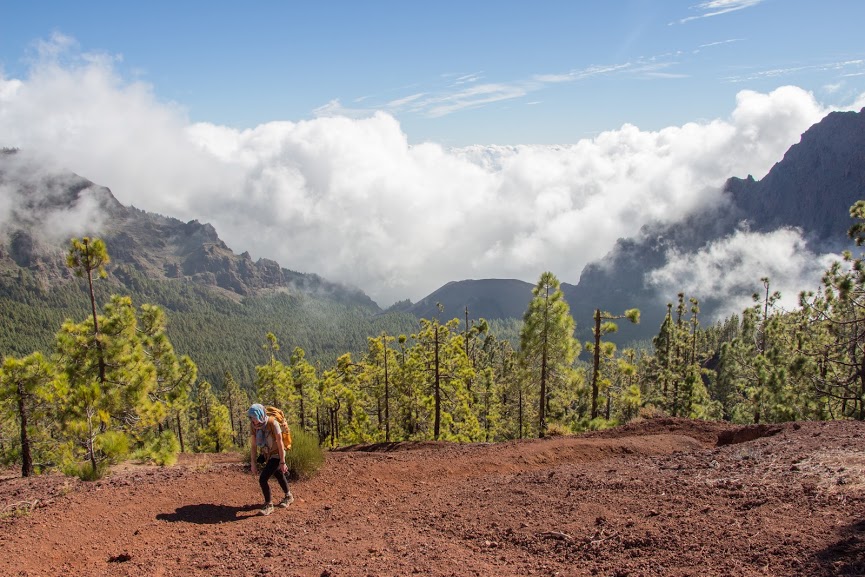 Where to camp in Tenerife

Camping in Tenerife is a great option. There are barely any privately owned campsites, but there are lots of public campgrounds. To use them, you have to book a spot via Central Reservas (Spanish only).

4) Fill your First Name (Nombre), Second Name (Apellidos), DNI/NIF (Spanish social number, if you don’t have any, write N/A), E-mail and your phone number. Confirm that you’ve read and you agree with the conditions (He leído y acepto las condiciones) and click Confirma reserva

That’s it, you’ve successfully booked your campsite. Write down the reservation number and download the page to your phone in case you’ll have to provide it to a local warden.

You can stay at a campsite for up to 7 days. Keep in mind that the public campgrounds have only basic facilities like water and toilets. No kitchen, groceries or hot showers.

Wild camping in Tenerife is officially forbidden, but some hikes are in remote places and it could be tricky to get out before dark. If you decide to stealth camp anyway, please, make sure you respect the environment and locals. Yes, I stealth camped there but I made sure that my camping ethics were extra high. I wouldn’t set up a tent, I’d always go to sleep after sunset and disappear before sunrise without any traces of me sleeping there. (And this includes toilet paper – it is completely unacceptable to leave toilet paper behind.)

I stealth camped only in remote places, outside of natural reservations where no other campsites were available. Please, do the same if you decide to wild camp in Tenerife.

There is a good selection of restaurants & pubs in almost every small village. Supermarkets are common too, especially in cities along the coast. But that’s not where you go hiking, is it?

Hiking trails are mostly inland, where it could be tricky to find a grocery store. But, the island is small – you can always take a bus to the closest coastal village where you can find some food. There are also quite a few markets in the towns where you can buy local produce. I truly recommend this option. Nothing tastes better on your hike than local food!

Compared to other parts of the world, there are a lot of hiking guides and maps for hiking in Tenerife. I reckon this is because many European hiking and travel writers go to the Canaries when winter comes to the old continent (wise men!).

I’m personally big fan of Cicerone hikes. Legendary walker and hiking writer Paddy Dillon published and maintains a hiking guide called Walking on Tenerife: 45 Walk including El Teide and GR131. It’s excellent. Pretty close behind Dillon’s top quality guide is Tenerife: The Finest Valley and Mountain Walks by Klaus and Annette Wolfsperger. Both guides include hiking maps which can be used for navigation and are sufficient enough for safe hiking on the island.

I have to say though, some parts of Tenerife are quite remote, so it’s always good to have a proper map on you if you plan o getting off the beaten track. To my knowledge, Tenerife 1:50,000 from KOMPASS is the best map for hiking in Tenerife.

At this point I should say that most hikes in Tenerife are very well marked. Usually the marks are shinny with lots of official signs but sometimes they’re improvised. 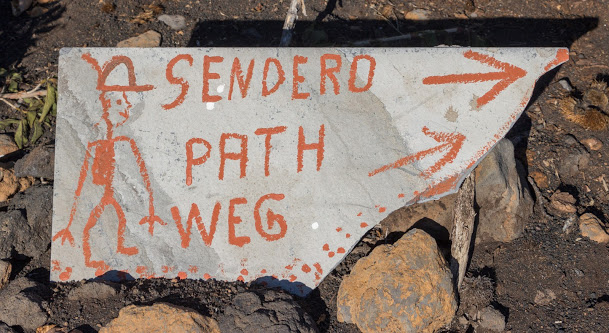 A few thoughts on gear

There are two things you should always carry on you: a sun visor and sunscreen. Even though in January it could a bit chilly (that means like 15 degrees chilly), the sun is still very strong.

If you plan on hiking around Mt Teide, remember that it’s a mountain over 3000m tall and such beauties need to be approached with respect. Last time when I was there, the mountain top was covered in snow and the wind and heavy rain were beating us with speeds of well over 100 km/h. In those conditions it’s not possible to make an ascent. You need to be prepared for winter conditions up there – a winter jacket and windproof pants are essential. 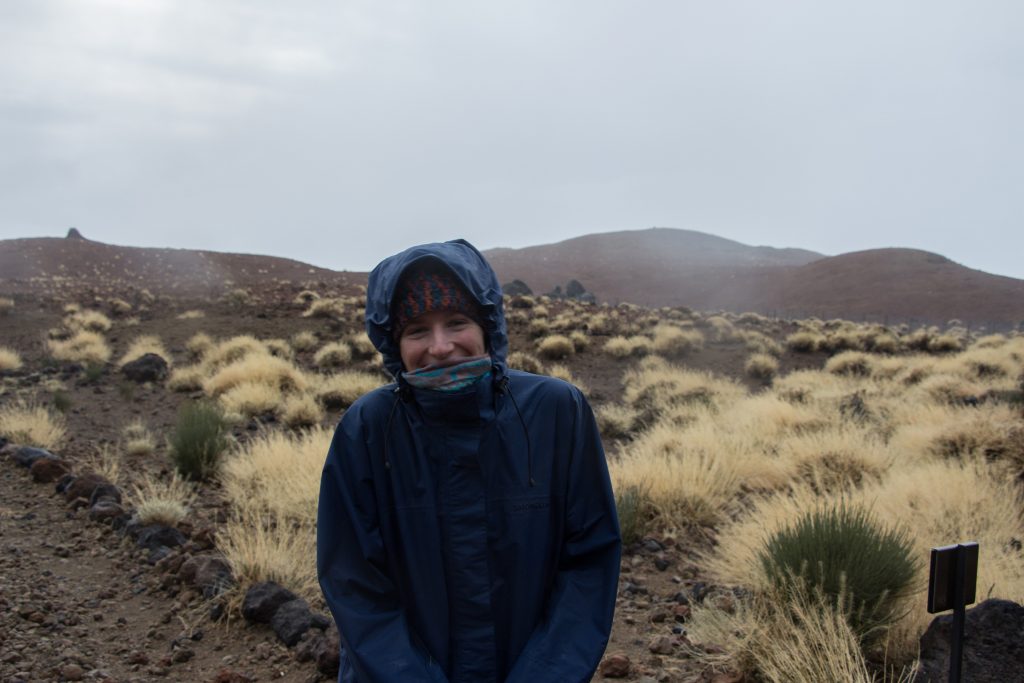 Anna, my hiking partner, after unsuccessful attempt to climb Mt Teide. It was serious winter up there that day!

Regarding cooking, it’s tricky to buy gas canisters in Tenerife. As far as I know, they have them in Decathlon in Santa Cruz and I was struggling to find them anywhere else. Alternatively you can get a stove like MSR Whisperlite and you’ll just need to visit the first petrol station you see, get some gas and your cooking fuel is sorted.

Where to go hiking in Tenerife

There is barely any settlement in Tenerife that wouldn’t have a hiking trail nearby. To give you an idea, zoom in on this online map. The red, green, yellow and blue lines show the hiking trails in Tenerife. You can find descriptions of all of them in the printed guides I’ve linked above.

You can also check an article about my TOP 3 hiking areas in Tenerife.

Be the first to comment on "Hiking in Tenerife: What You Need to Know"