The Port Hills are the closest hills to Christchurch and I’d been thinking about traversing them since I first moved to the city. One day in July I asked Emma if she’d be keen to co-lead this trip as we would need 2 cars, and I knew that Emma was used to running trips like this before breakfast. She enthusiastically agreed – though at the time we had no idea that 30 trampers would sign up for the trip!

The day started at 5 AM when my alarm went off as the designated drivers for the return trip had planned to meet at Gebbies Pass at 6.30 AM. We left our cars there and Barry and Alan drove us to Taylor’s Mistake to meet the rest of the group for the start of the trip.

Like good shepherds (I mean trip leaders), we counted our sheep (I mean trampers) and we collected 10 NZD to make it easier for us to distribute the money to the drivers later on.

Emma led the fast beasts and I stayed with the slowish folks at the back. Most folks stayed in the middle somewhere. I have to say though that by slowish I don’t mean actually slow – the last of us reached Gebbies Pass in 10 hours which was still way faster than I had anticipated.

The first part of the trail went pretty well. There were a lot of ups and downs and the first half (Godley to Sign of Kiwi) was definitely harder than the second half (Sign of Kiwi to Gebbies).

We were all happy to reach the Gondola where my small group met up with some other folks from the middle group who were finishing their snack. But the highlight of the day came at the Sugarloaf car park where we met Chris. Chris had set up a regular outdoor cafe there for thirsty trampers with boiling water, camping chairs and plenty of tea and coffee to choose from. A few people decided to bail from here and from Chris’s cafe it was only a short walk to the Sign of Kiwi where a few more people decided to stop.

From the Sign of Kiwi onwards it was actually quite a pleasant walk. We followed a lot of wide grassy paths and also crossed some cool patches of native bush. The last couple of kilometers consisted of ridges where it got significantly colder with strong winds buffeting our tired bodies. When we reached the road at the end of the Crater Rim Walkway, we met up with Chris who in the meantime had driven to Gebbies and walked up to meet us.

We had tried to encourage people to make sure they were walking with a driver so that they wouldn’t end up stranded in the carpark, but this turned out to be wishful thinking and when we arrived at Gebbies, there were 6 trampers who had been waiting for 40min and got quite cold. But we were all happy to have made it and overall it was an awesome day.

Big thanks to Alan who helped with the car shuffle even though he didn’t do the actual walk, Chris for his cafe and driving bailers back to their cars, and Barry, Kristy, Monika, Ben and John for driving. And of course big thanks to Emma for co-leading and co-organizing, it was much easier to do this with 2 leaders. Let’s make more trips with 2 trip leaders! 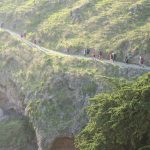 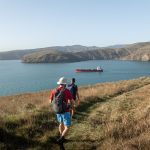 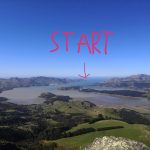 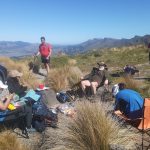 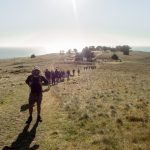 Be the first to comment on "Godley to Gebbies: Traverse of the Port Hills"