The Fimmvörðuháls pass from Skógar to Thórsmork is one of the classic hikes in Iceland. You can hike it in either direction and every year there is pretty much only a two month window when the track is passable. Well, as we discovered on our own, even within this window there are patches of weather where it’s still impassable. But let’s start from the beginning. 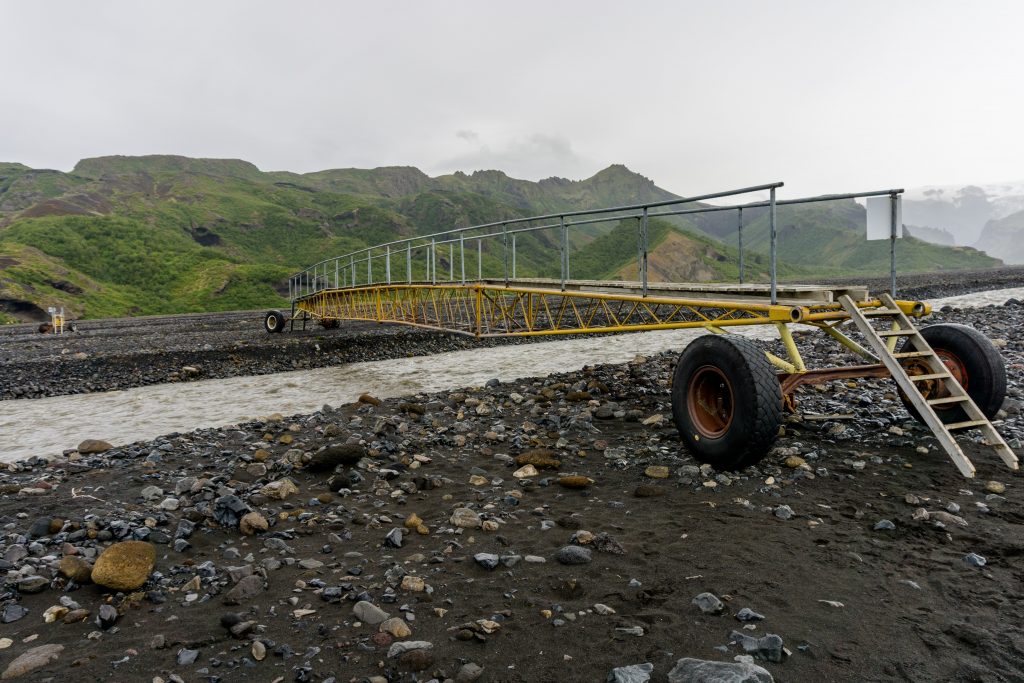 Movable bridge at the beginning of the trail

We started to hike in the early morning of a slightly foggy day. We tried to find out some information about the forecast in Thórsmörk campsite but we weren’t successful. The warden disappeared and hadn’t bother to write down the forecast somewhere as wardens had at the other huts on the Laugavegur Trail. According to yr.no and the local forecast server Vedur it was supposed to be slightly windy with occasional showers. Nothing that two experienced trampers wouldn’t manage! 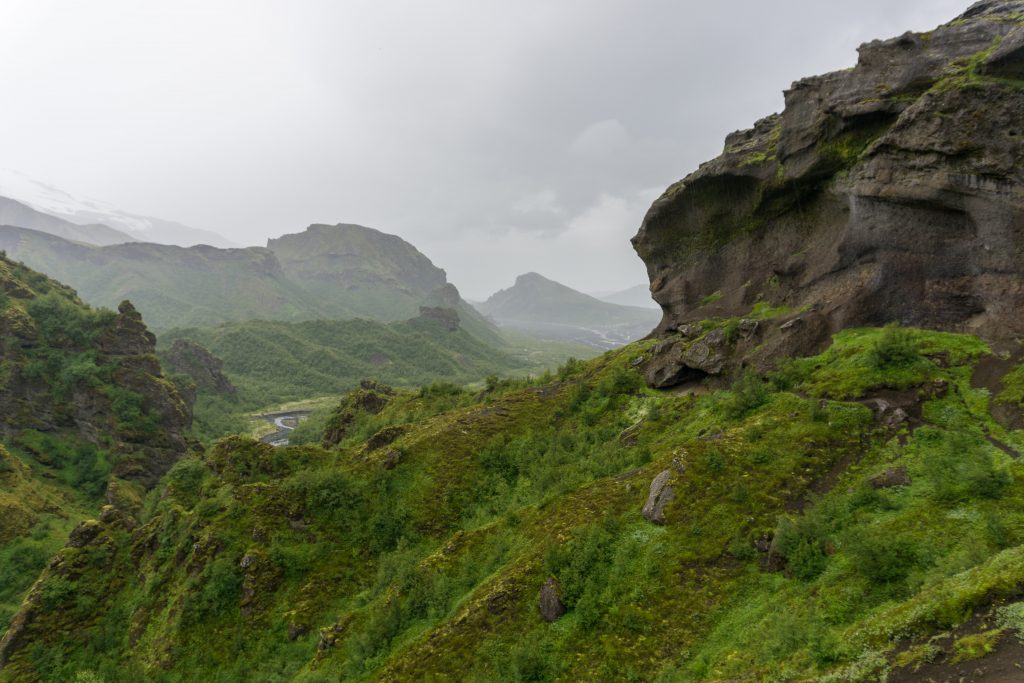 On the way up to the glaciers

The first few kilometres were alright. It was raining a lot instead of a bit and the wind was quite a bit stronger than it was supposed to be. We were wet but well prepared for any kind of weather and determined to nail the trail. The glacier valley continued to impress us more and more and we were excited for what might be around the corner. 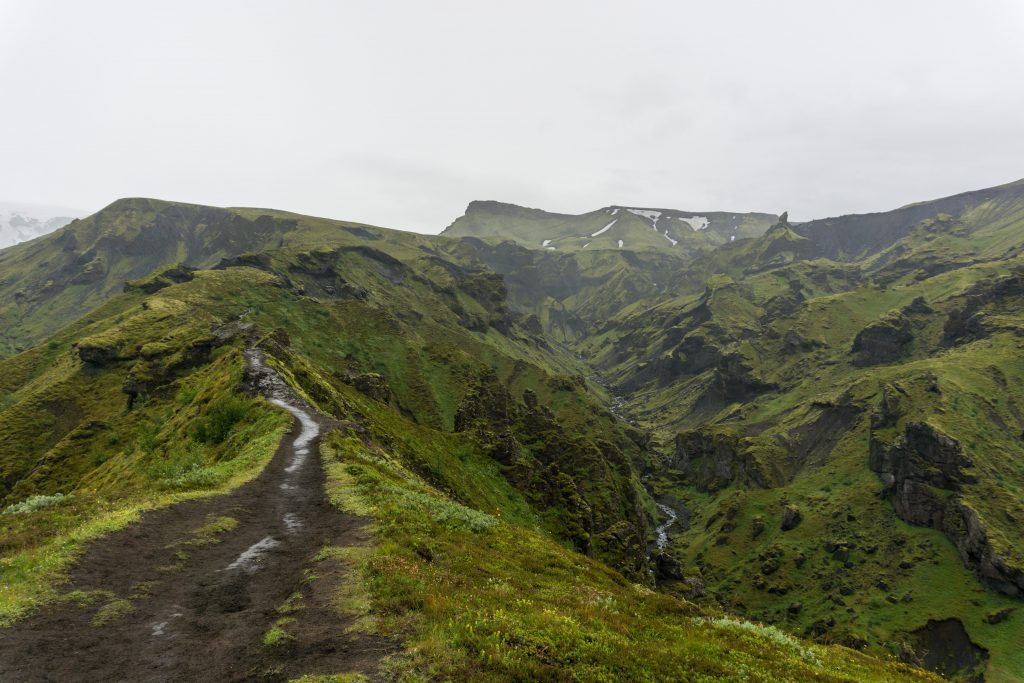 Walking on the ridge

After a couple of hours of walking we reached a flat plateau at 750 m above the sea level. We were immediately hit by very strong wind and our walking started to resemble that of two drunks at sunrise coming back from a pub. My estimation was that the wind was about 60 km/h with stronger, sudden gusts. It was still passable if we were to continue on flat terrain. However, soon we came to a ridge sharp as my mum’s words about life truths. For the first time I started to think about bailing (and that’s usually a sign that I should!). However, there were a few people ahead of us walking on the steep slope on the other side of the ridge so we decided to give it a go. Slowly and almost in a sitting position we traversed the short ridge with our arms linked and each with a hiking pole in our outer hand. But as soon as we crossed, we met a couple of guys descending from the mountain and saying that the upper parts were impassable. We saw that the trail was leading somewhere up to the clouds on a snowy slope of volcanic ash. Looking at that I think we both independently decided to follow the two fellows and go back. We had to cross the sharp ridge again, me half standing and Anna sanding her bum on the pumice. As is often the case, it’s better to be safe than sorry. On the way back we passed on the warning to a few more people that it was impassable. Some people believed us and turned back, others carried on to see with their own eyes. They turned back later too. 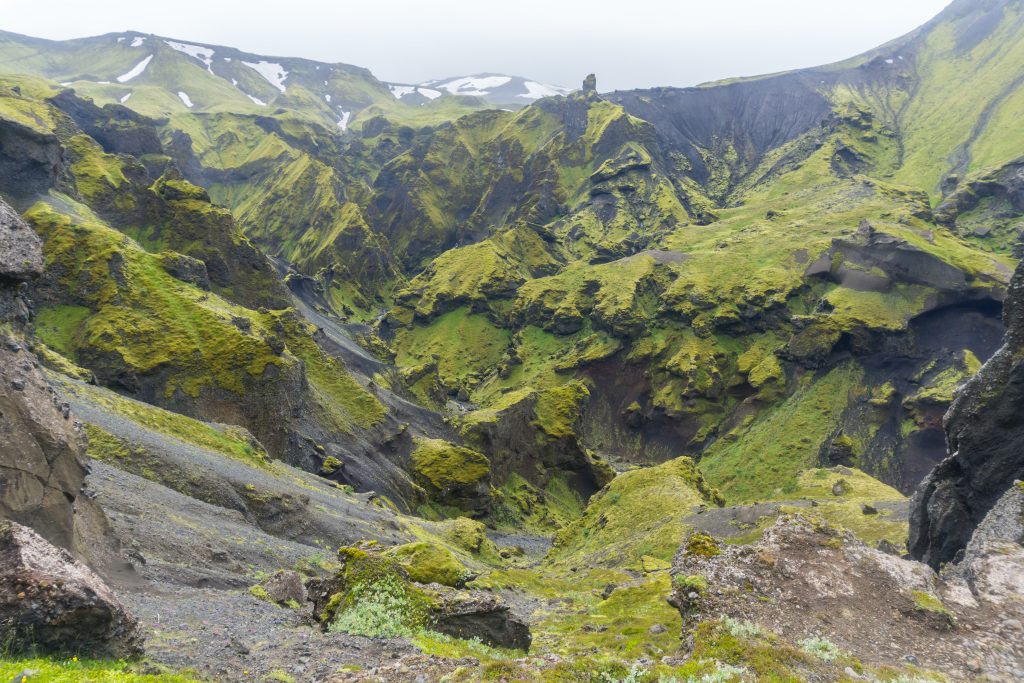 Back “down” by the green canyons

I think the mountains were very happy with our decision and that’s why they gave us sunshine on the way down, even though the wind had picked up noticeably. For the rest of the day we rested and chilled, being happy that we could be happy. 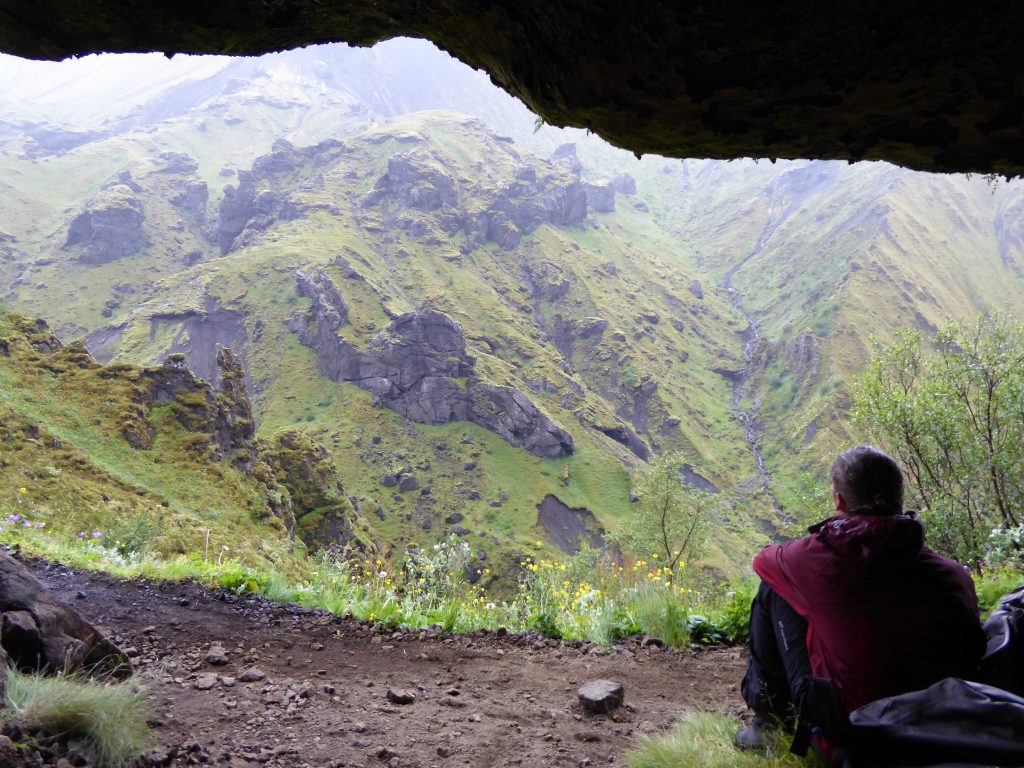 Safely down in a dry cave (photo by Anna)

The weather is extremely tricky in Iceland. I have hiked in many places but this country has the trickiest weather I’ve seen so far (more unpredictable than New Zealand – and that’s saying something!). You can be beaten by heavy rain while looking at a sunny spot a hundred metres ahead. Especially here in the Fimmvörðuháls pass where two glaciers meet, one should be extremely careful, ready for any kind of weather and even then use good judgment and the courage to say “Not today, but thank you anyway”.

The map shows the whole trail, we actually turned back somewhere in 800 m.

Hiking around Lake Mývatn: Reykjahlíð – Hverfjall – Dimmuborgir and back

Be the first to comment on "From Thórsmörk to Skógar: How we didn’t pass the Fimmvörðuháls pass"