Anaga, Tenerife, can’t be described, it must be lived. Hiking there feels like a forgotten dream, or an old memory that you don’t remember, but sometimes find yourself feeling, “Wow, this is familiar!”. It’s a place with magnificent views, genuinely kind people and old settlements with classical Canary architecture. White houses with green painted yards are sitting on the roughly shaped cliffs, small fields are spread over misty mountains, and even if you see them from all possible sides, you can’t even glimpse the pathway going up, so you can only wonder how anyone could ever get there to build the stone terraces and plant that darn corn. 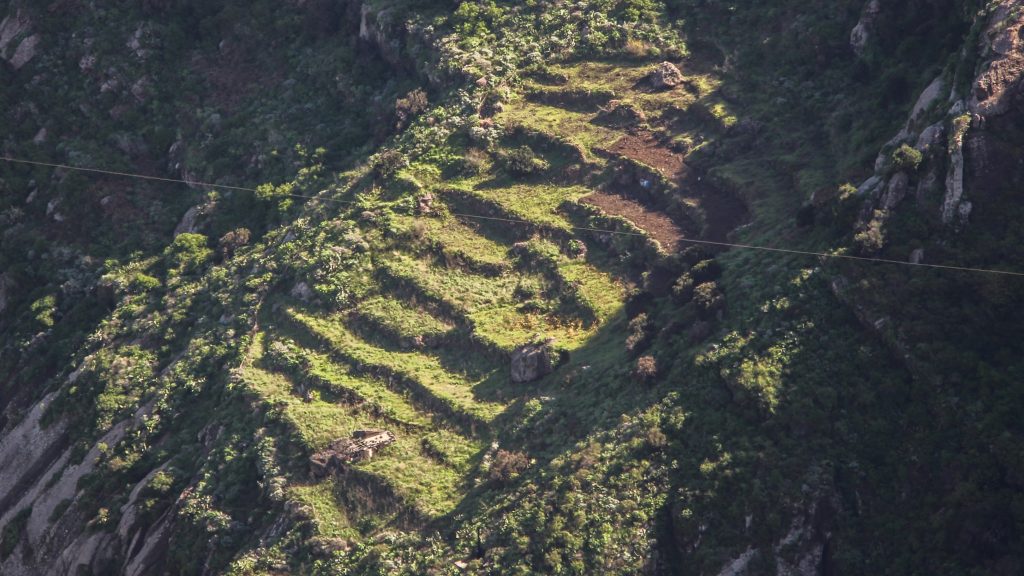 I started my crossing in the small town of Tegueste, walking up the narrow but unbelievably steep streets at sunrise. Soon after I set off, I spotted Mt Teide proudly sticking it’s peak into the sky. 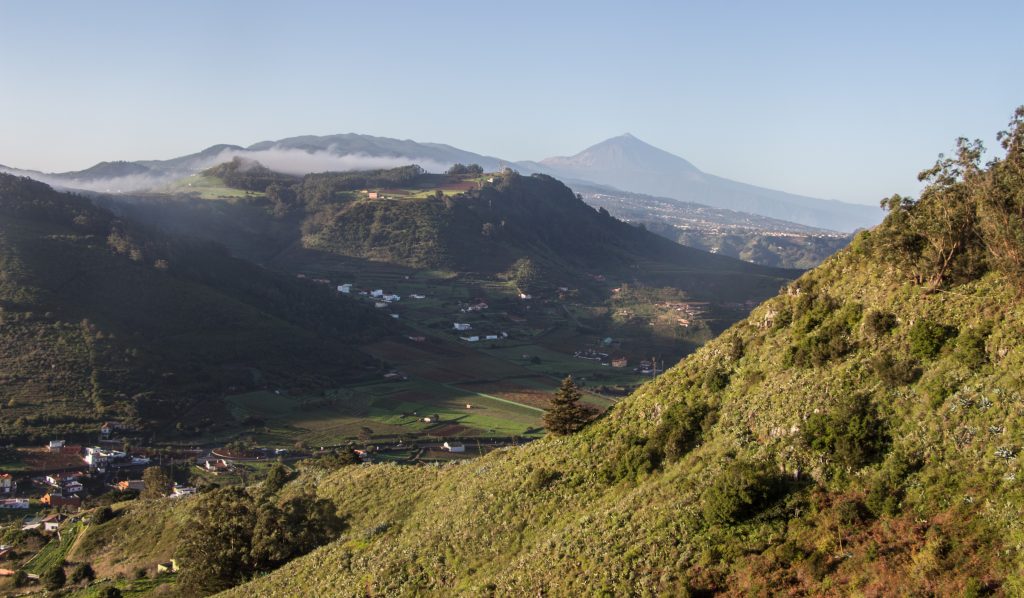 On the edge of Anaga Park; Mt Teide in the back

As soon as you get to the ridge, you start to walk down again. In general, in Anaga, it’s not hard to get to the tops but it’s hard to stay there. You can barely find any order to the ridges that you’re used to seeing in other ranges, where small ridges grow from the main one like side leafs from a fern stem. A volcanic eruption a few million years ago mixed the local sub grades so well that the following erosion got really confused and was working on some parts much harder than on the other ones.

On of the small settlements

I’m not sure exactly when I entered the forest, but I’m sure of the moment when I experienced goose skin for the first time: when I realized that I was walking under magnificent trees leaning over the trail like they’d be there to protect hikers from foul weather. In a couple of hours I passed Cruz del Carmen. It used to be a traditional place of re-supply for Anagians. Nowadays it’s a place where you can buy expensive doughnuts, get some drinking water from the toilets in a local cafe, or park your car before going for a 50 metre walk to a viewpoint. Considering the number of cars, the last option is definitely the favoured one for most of the visitors. 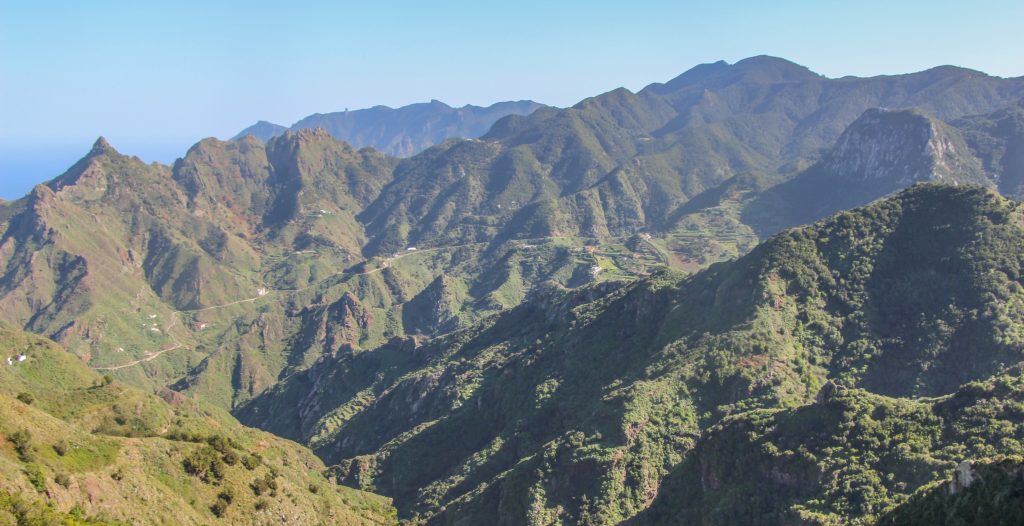 I continued walking on the road, just enough to get to Cruz de Afur. I don’t know, There’s something truly romantic about walking on the roads with your backpack, letting the cars pass with that no-i-don’t-need-a-ride-i’m-happy-walking look. Soon I turned left to the trail heading towards Afur. The trail here goes down steeply so if you happen to walk here, please pay attention to the road and don’t stare at the magnificent terraces on your right. I assure you there will be plenty more of them. In Afur there is a small pub where you can resupply, especially if you’re fond of beer, wine or biscuits. When I entered the pub, there was an old guy with a grey beard which used to be black and in a grey undershirt which used to be white. He was looking at me suspiciously. Yep, I can clearly hear the question in his head: “Is this guy in shabby clothes gonna buy some of my biscuits, or is he gonna just ask for some water like everybody else does?”. I pointed out a random biscuit package saying “Estas galletas por favour!” [These biscuits please!]. The guy smiled in relief, leaned under the counter and when he straightened up, he looked with a surprise at an empty 2 litre bottle on his counter which had just appeared there. His face was saying: “Oh man, I knew it!”, but then he’d grabbed the bottle, smiled in understanding and filled it up for me. 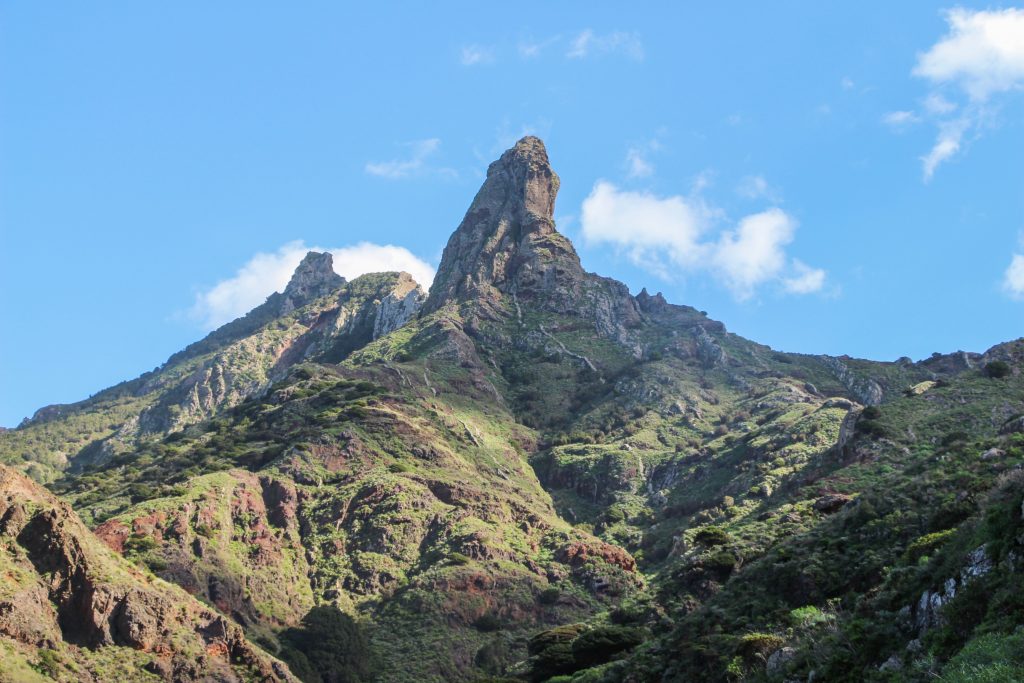 One of Anaga’s rock formations

From Afur, you are led an amazing way down into the canyon to the beach, Playa de Tamadite. I’ve never been to the Grand Canyon but that’s how I imagine it. Crop the top, decrease the red colour, resize it to 20% and you’ve got the Barranco de Afur. 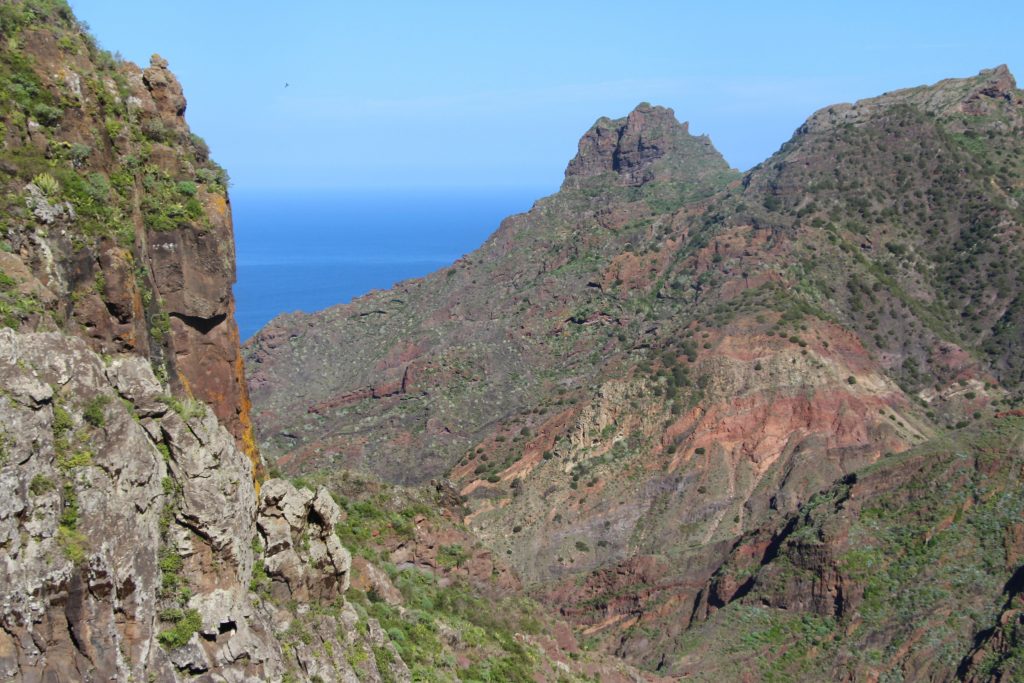 When I got to the beach, I felt physically ready to nail another few hours of hiking but I knew my eyes were not able to send towards my heart any more of Anaga’s magic. I decided to stay on the beach, get naked and let the waves play with my hair, then later to hypnotize me until a long, deep, deep sleep. If people need specs for their eyes, they can check over here. Because I’m an early bird when hiking, I was on my way to Taganana by about 5 AM. The full moon was so bright that I didn’t need a headlamp. It was actually for the first time in my life that I was seriously considering putting my sunglasses on because of the moon. Normally a ridiculous idea, but an everyday issue you need to deal with in Anaga. In Taganana I bought a bottle of famous Anaga wine and continued walking on the road towards Benijo. The local beaches are famous surfing spots with many bars on the way. Many of them have been closed a long time with peeling plaster and a few layers of graffiti. The rest of them look like they have to fight hard every day to survive. It’s understandable especially after seeing all the surfers’ rusty vans parking next to the beach. Surfers, similar to hikers, don’t need much and they’re usually happier to drink a local wine directly from a bottle than to drink a fancy foreign wine in local bars from dishwashed wine glasses. The scenery continues to be very majestic and I get used to having goose skin all the time from the energy splashing from every possible side: ocean on the left, ragged cliffs on the right, green forests ahead. From Benijo I continued to the utmost corner of Anaga: Las Palmas. It’s the loneliest village of Anaga with just a few houses sitting on huge cliffs, around two hundred metres above sea level. During the descent to the village I met Francisco who is the only permanent inhabitant of the village. He’d been living there for 8 years just with his dog, chickens and a donkey. He doesn’t talk much but you can see in his eyes that he’s living the Anaga. At the end of our short talk he shakes my hand and I have to put quite a bit of effort into not grinning under the strength of his shake. A house in Las Palmas

From Las Palmas I continued all the way to Roque Bermejo and then up to Chamorga. Have you ever seen a goat, sitting on the top of another goat, which is lying on a 1.5m tall stone like a pillar of public lighting? Well, you might have a chance here. In Chamorga I finished my crossing at sunset. The bus leaves twice a day but I was lucky enough get a ride from a random German guy. Many hikes you do because you wanna see stuff. In Anaga you’ll live stuff. From every small settlement here you can clearly feel that strong relationship of the people with the land, water, ocean and life. Whimsical weather together with bizarre shapes of the landscape have created countless micro climates. For scientists it means that they can find here the largest number of endemic species in Europe per a square kilometre. For a hiker it means that while you’re standing knee-deep in mud, you stare at a landscape ahead dry as a bone. I hiked about 35km, ascended about 2km and came home with the feeling that I know shit about life again. 12 Comments on "Hiking in Anaga Mountains of Tenerife"