Cass-Lagoon Saddle Track is one of the most popular tracks in Craigieburn Forest Park / Arthur’s Pass broader area. About half of the track is part of Te Araora Trail. Anna and I decided to see with our own eyes if it’s as pretty as people say (spoiler alert: yes, it is!).

We started our two day tramp at Wilderness Lodge Car Park. We decided to do the tramp clockwise which is the opposite way to what the official DOC brochure recommends. I think the only reason why DOC suggests to do it anticlockwise is that you do the flat part first and leave the steep part for later. Nah, we can do the steep part first! 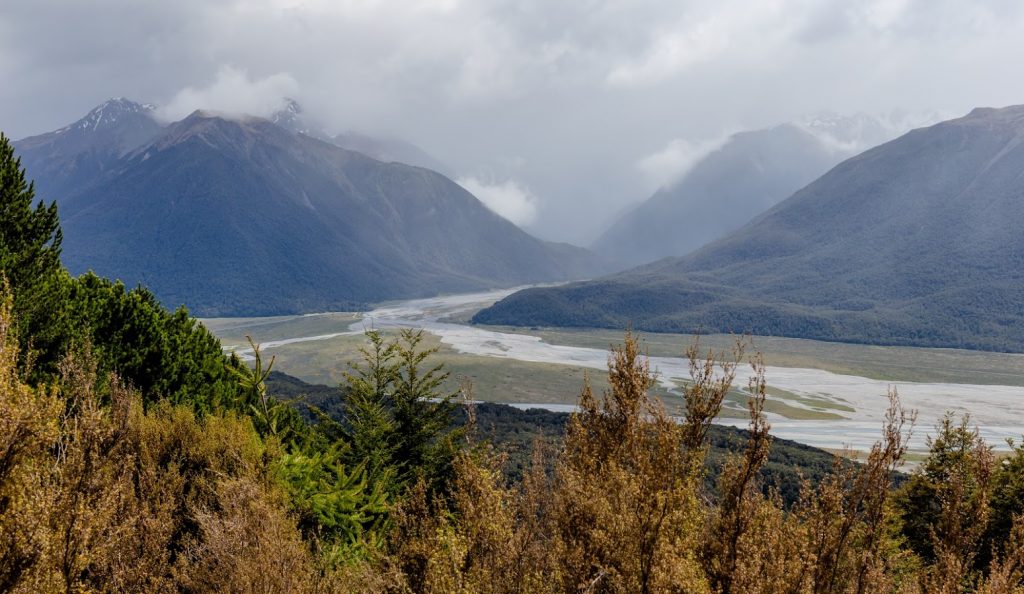 When we were leaving Wilderness Lodge Car Park, the sky was pretty cloudy and it was actually raining a bit which was not at all what the weather forecast said! After a few minutes of walking, we passed Bealay Hut, classic NZFS SF70 six-bunks hut. I came in to check it out and there was an oldish tramper sleeping. When I opened the door, he immediately stood up and started to walk around like “Nah, I wasn’t sleeping at all, I was just getting some shuteye bro!”. Like I’d care you know. But it was funny, especially when I realized that I do the same. That’s some kind of hidden guilt in the back of our minds that says that we shouldn’t sleep during the day that makes us do things like that. The way to Lagoon saddle was going through the bush and pine forest first and later it led us to open tussocks. Up in Lagoon Saddle, we met quite a few people going down the mountain. It was Sunday so I was fairly sure that we might be the only people actually going in, everybody else was coming out. That’s the beautiful thing about tramping New Zealand – outside of Friday and Saturday, the mountains are nearly human-less. The views from the saddle were magnificent and gave me some ideas for some adventurous tramping trips in the future.

After Lagoon Saddle, the track follows Harper River through a beautiful bush. I was hoping that we wouldn’t have to get our feet wet but there were so many relatively deep river crossings that I didn’t even think of staying dry. 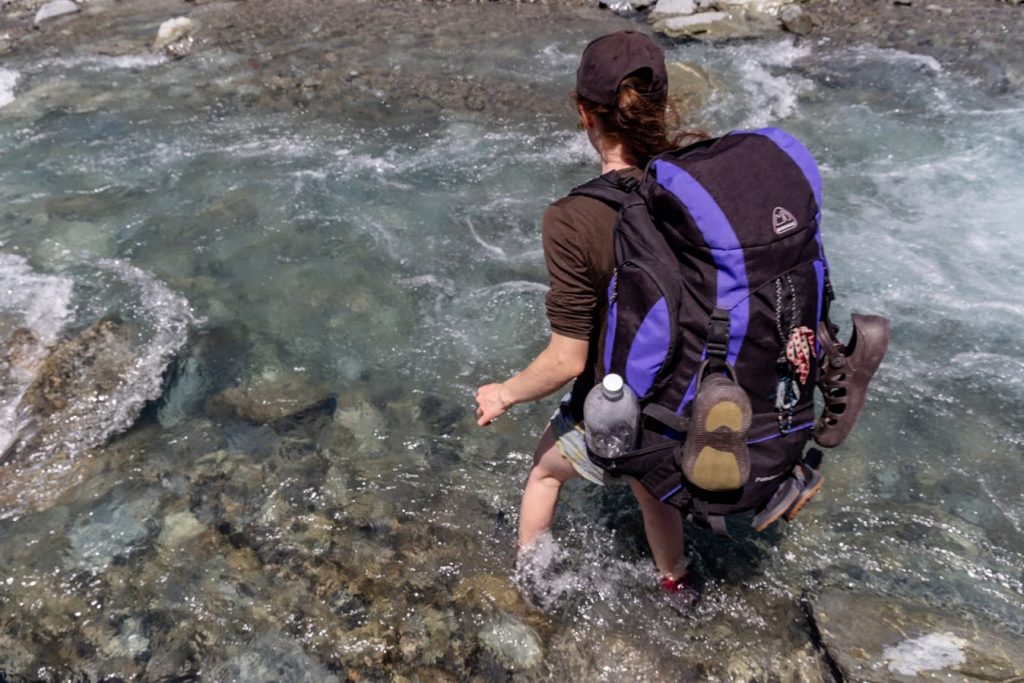 Anna’s going for it

After about 2 hours we reached West Harper Hut. Considering it’s a DIY hut from 1957, it was in a fair shape. Even though it was very cozy inside, the number of rats and sandflies was mind-blowing so I wouldn’t recommend to actually sleep there. Camping around or pushing further to Hamilton Hut seems like a more sensible idea to me. 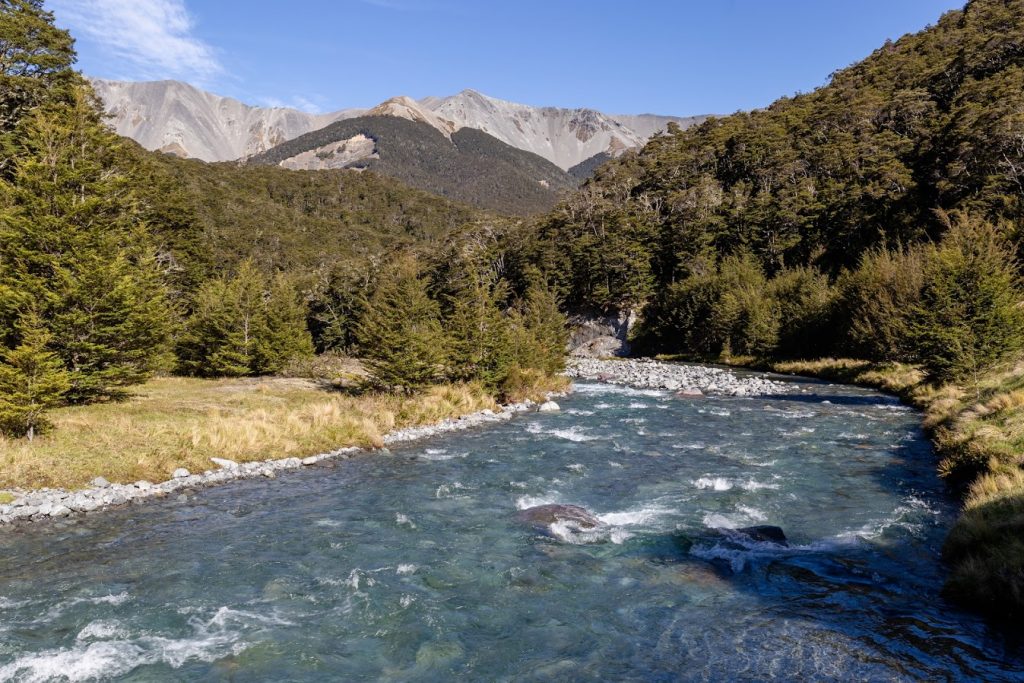 The river gets quite wide but not too deep

Hamilton Hut is a serviced hut about halfway through the Cass-Lagoon Saddle Track. It’s a five-star hut with a huge badass looking fireplace in the middle. Hamilton Hut from inside

We were quite knackered when we reached the hut so we made ourselves a fancy dinner and took some rest. Later on, when I was enjoying the view from the hut, I noticed that on the other side of the valley there is a sign made out of stones saying SPA. What the heck was that? We decided to check it out. Whatever it was, I don’t think it’s there anymore. We searched the nearby forest and the hut book but I still have no clue what it meant. Just before it got dark, a couple of Aussie trampers arrived and we all went to sleep. Sleep after a long tramp is always so satisfying! A swing bridge by Hamilton Hut

The following morning, we had a good chat with the Aussies and off we went. The way to Cass Saddle followed Hamilton Creek with a few non-negotiable river crossings. The views of the surrounding mountains and the river itself were very picturesque. Steep rocky slopes covered with beech forest, the valley bottom filled with the blue river, mountains tops covered with the last bits of snow of this season…

Cass Saddle itself was similar to Lagoon Saddle – full of open tussocks and with some gorgeous views towards the tops of the mountains. Same as Lagoon Saddle, it’s also prone to avalanches. In the winter, extreme care needs to be taken when crossing the saddles. To be honest the steep slopes of the Craigieburn Range looked quite scary even in the summer and I wouldn’t want to be there when they’re covered in melting snow.

Soon after the saddle, we entered the bush again. There we found Cass Saddle Hut. That hut looked so cozy and clean that I immediately put it on my list of huts to visit in the winter. The last bit – from Cass Saddle Hut to the Cass Car Park – was quite long and tiring but still with some of the best views that we had. There are multiple compulsory river crossings and if the weather level is high, it’ll become impassable. 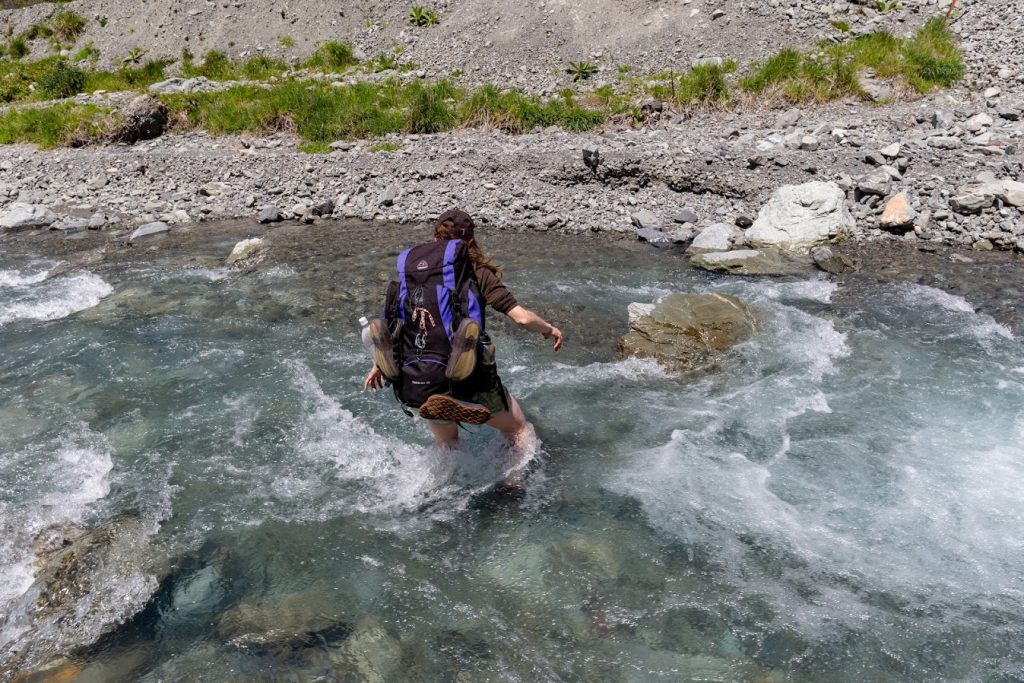 The trail is not a loop so you have to have your transport sorted. I did it by leaving my bike at the Cass Saddle Car Park and cycling back to the Wilderness Lodge Car Park to our car. The trail ended up being amazingly good, seriously my favorite tramp in Canterbury so far. The track is really well maintained and if you manage to get out there outside of Saturdays and Te Araora season, you’ll have it all for yourself. 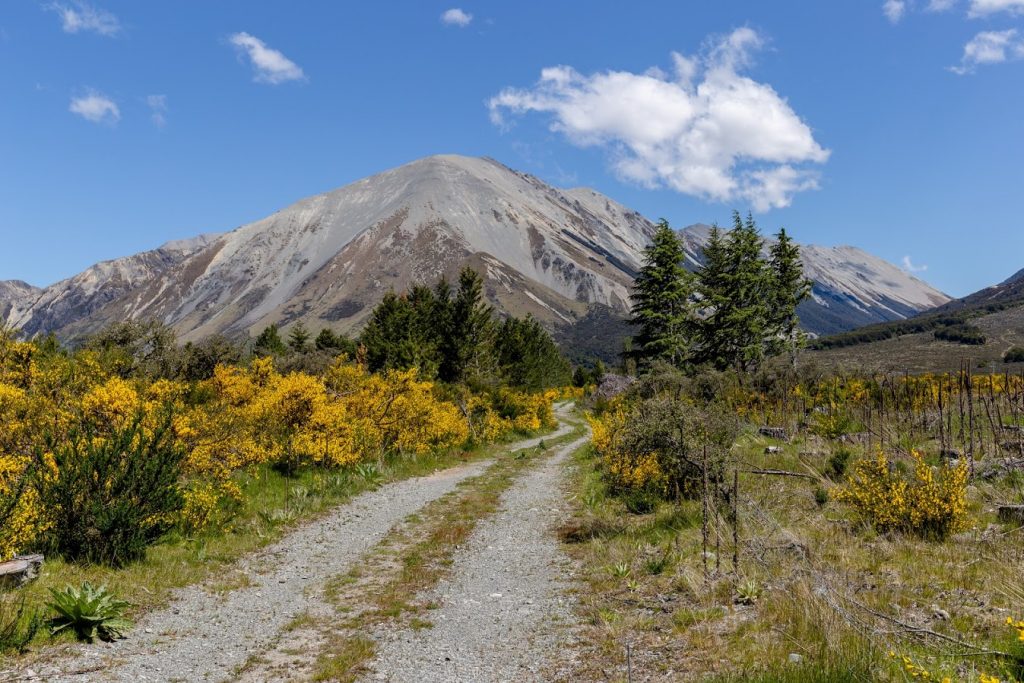 I had to postpone my Mt Norma trip with the #chris

I'm already sold to tramping with a baby but I'm s

#20th peak of my #52peakschallenge was Avalanche

Life is good when you can watch sunrise on the mou

Tramping with Elk is starting to be quite fun. Dur

Logistic side of tramping with toddlers was highly

My 18th peak of my #52peakschallenge was Travers P

The Pyramid – Loop via Sudden Valley