So I did it. I joined the Christchurch Tramping Club. I have to say that I was a bit suspicious of what it was going to be like to hike in a group of a dozen hikers with different life and tramping experience under their belts. Well, I have to say now that it was great fun!

The first trip I went on was an overnighter to Boundary Creek Hut. That’s a basic hut in Hakatere Conservation Park in Canterbury, about an hour and a half from Christchurch. The plan was clear: get to the hut along a 4WD road and if the weather allows, walk to Lake Mystery the day after. We started on Saturday morning from Hakatere Car Park. The weather was brilliant considering it was the edge of winter. We started to follow a clearly visible path through flat areas full of tussocks and prickly plants. I had no idea that such a dry, barren landscape like this exists so close to Christchurch! 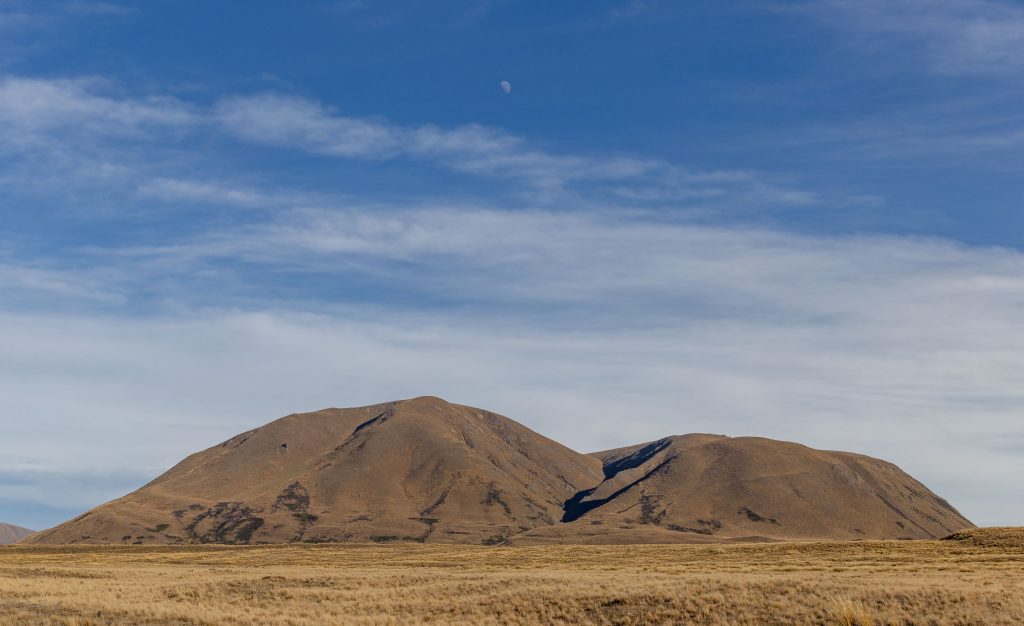 When we reached Paddle Hill Creek, a shallow tiny stream, I started to take my shoes off, when I realized nobody else is doing it. I felt a bit awkward but crossed the river bare feet. Everybody else crossed the stream in their boots or trainers so they got wet shoes. I didn’t dare to doubt national standards on my first hiking trip with locals so I rather put my shoes back on and continued. One day I’ll write an article on this though; it’s quite an interesting topic.

We continued north along Paddle Hill Creek on a 4WD track. This part all the way to the hut was muddy as. It was so slippery! I felt like a ballerina after a bottle of wine. Luckily I had my hiking poles that are brilliant for balancing on muddy roads. I mean they didn’t save me from falling but they gave me confidence. Like when my girlfriend blows on my broken finger. It just works. 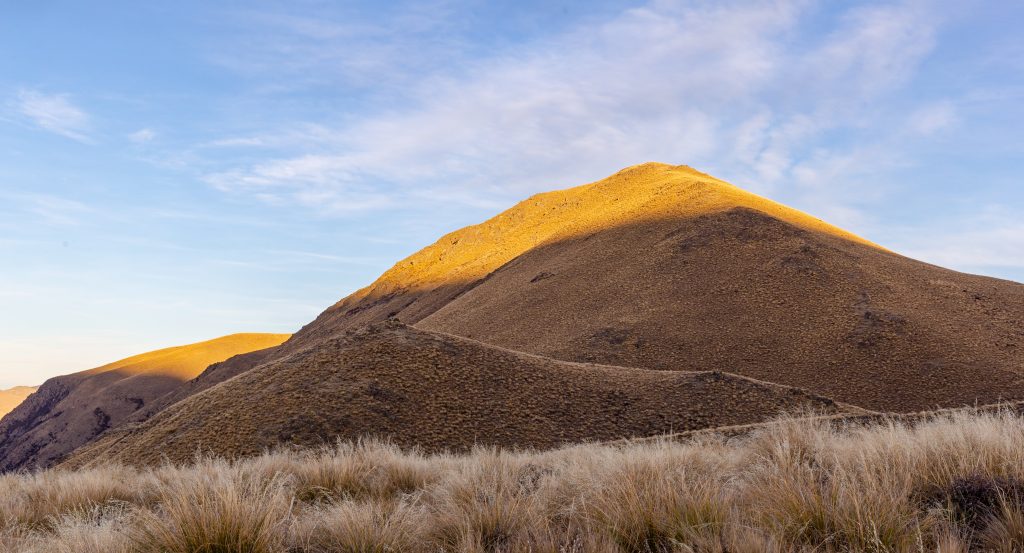 We reached Boundary Creek Hut in the early afternoon. The wind started to be a bit strong by then so I bailed the idea of tenting and decided to sleep in a hut with two other hikers. Rest of the group was camping. I was quite impressed by that. I still feel a bit under-hutted as I camped so much in Europe in the last three years and I was often thinking of steady walls of DOC huts and how lucky local trampers are to have them. For the rest of the day, we were just hanging out – sharing stories, cooking, resting, cooking, napping, cooking again, taking pictures and doing short walks around. The light that night was absolutely brilliant – so pink that I couldn’t believe that it was real. If someone showed me a picture of it, I’d probably say „Nice Photoshop work, man“. But nah, it was real. Total pink magic. 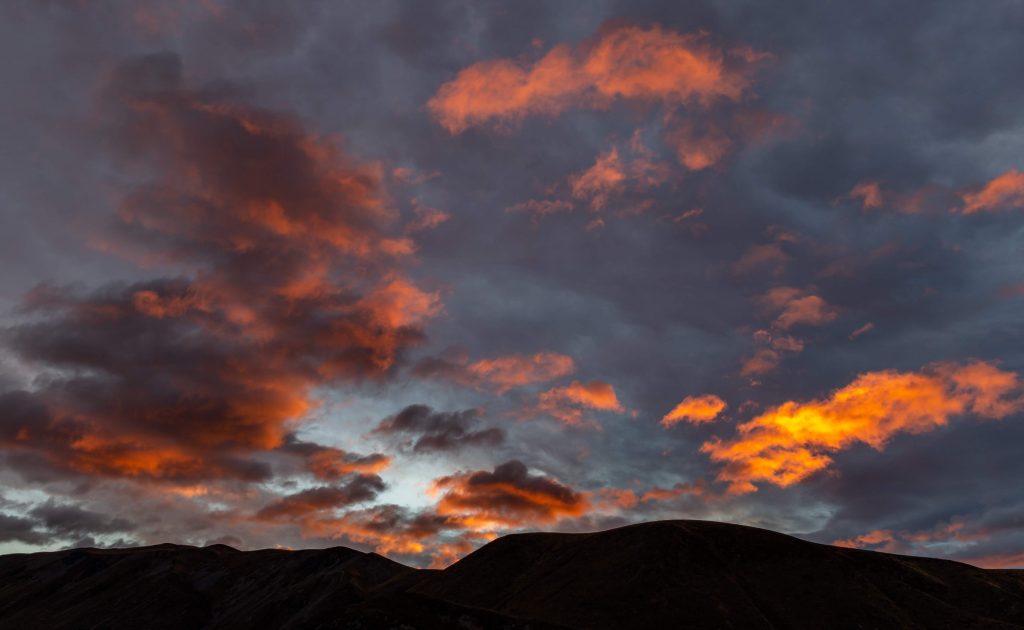 The day after, I woke up in the early morning, ignored the rat poison that local rat family spread across the hut, and set off to take a few pictures. It’s kind of nice to go for “easy” trips, as it’s more about camping and relaxing than actual hiking which I tend to do more when I’m on my own. What a great view while playing games like the ones on 카지노 사이트, for example. After the breakfast, we continued along Potts Hut Track and later Mystery Lake Link Track. This was the most stunning part of the trail. We went up to about 1200m and the views were just mesmerizing there. There are basically endless tramping opportunities and it’s hard to not feel like „Oh dude, I’m coming back to climb that mountain over there! And that one too! Oh no, actually that one first!“.

We took a decent break by Mystery Lake. I had a great idea to go for a short swim but I managed to put into the water only a nail top of my toe. Possibly summer would work better for some of my ideas. 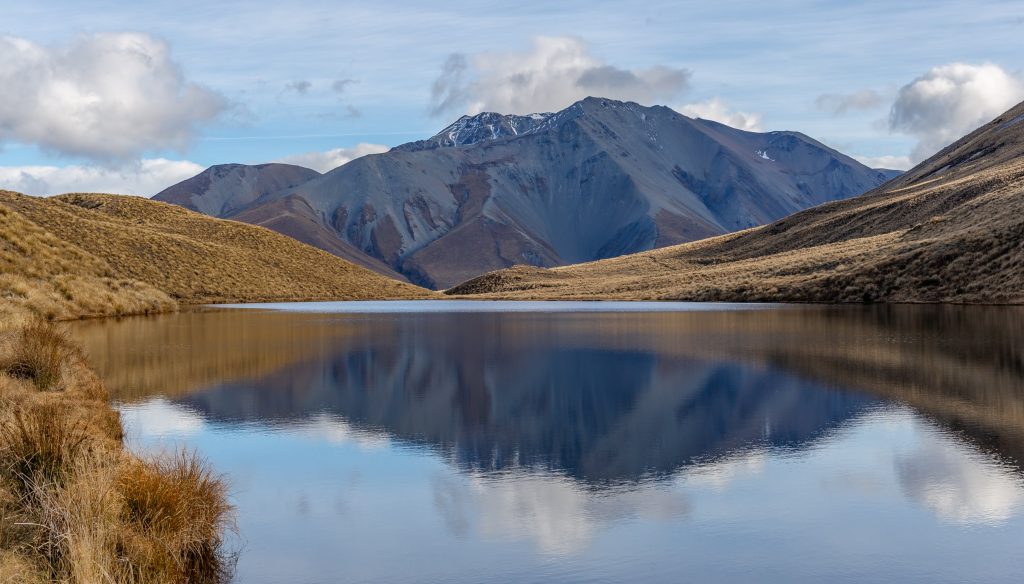 The way back to the car was quite rocky and it was slowly, but constantly down. We followed Mystery Lake Track first and later jumped on Te Araora Trail.

We reached the car park in the late afternoon, jumped into cars and started to drive on a gravel road. Yupiii! A few minutes later, scary thing happened: the car ahead of us lost its wheel. They were going only about 40km/h but the passengers still looked pretty shocked when we approach them a half minute after the incident. The car owner looked very sad but after seeing it’s not fixable, she only said: “Let’s go to a pub, I need a drink”. This wish wasn’t very hard to follow so in an hour or so we found ourselves drinking beer in a big yet very cozy pub in Sheffield. Buddha blesses tramping clubs.

This hike would be perfect tramp for people new to hiking or for guys who just want to hang out as it’s pretty flat around but still with great views. The bare landscape itself is not as exciting as New Zealand bush, but 360 views are worth it! If you want to simulate playing golf on gorgeous landscapes like this, that’s entirely possible when you utilize the best sports gadgets.